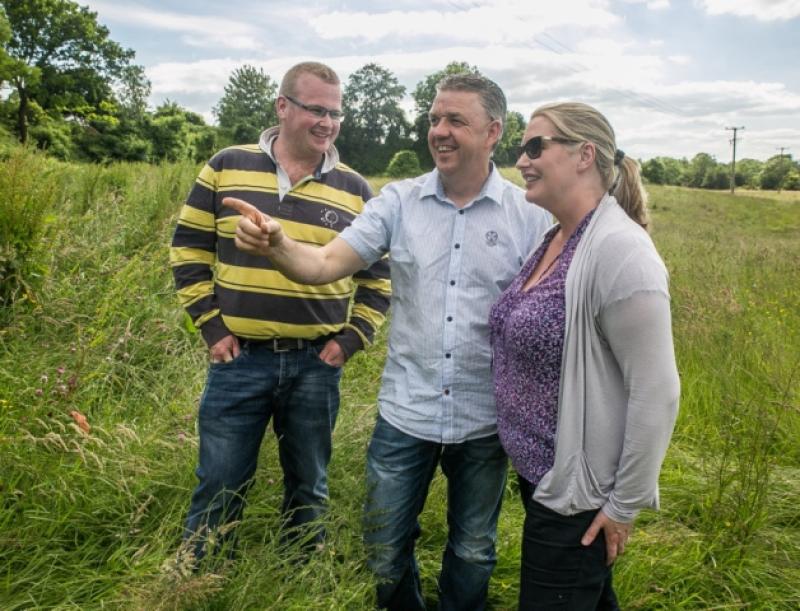 A dedicated group of people in Goresbridge have a vision for a special inclusive development, to benefit the whole community for years to come.

A dedicated group of people in Goresbridge have a vision for a special inclusive development, to benefit the whole community for years to come.

The Brigidine Order donated a patch of land at Lower Grange, between the national school and the cemetery, to the parish some years back. At the moment, it is an overgrown field of brush and nettles, but the Goresbridge Community Park Development Committee is hoping to turn it into something special to benefit the whole community for years to come.

They have a vision for a new, state-of-the-art facility – a focal point for the whole community with something for everyone. The ambitious project has successfully cleared the first major hurdle, with the council granting full planning permission last autumn, and agreements leased.

The planned development entails a new all-weather playing pitch, allotments, a sensory garden, a playground, and a walking path with exercise equipment located at various points along the path. Permission has also been granted for a new building with a changing room, public toilets, and a store.

“About two years ago, we started with a public meeting,” says David Holmes, chairman of the development committee.

“We got all the different groups together. We had nearly someone from every organisation, every club, older people, from all the committees around. Out of that we formed a sub-committee, which came up with the plans for the whole area. Then we had an AGM and formed a committee from that.”

The committe members say they want to promote a healthy lifestyle for all members of the community.

“Facilities like this will be a huge advantage to everyone,” says David.

“We hope this park will encourage people to bring their children to the playground in the park and get a little bit of exercise themselves. The walking track will have lighting all around and this will create a safe environment for all walkers/ runners away from the dangers of our busy roads. It is important that everyone knows that this park is for every member of the community and surrounding parishes.”

The costing of the first stage has been done, and there are some funds already in the account. But a project of this scope will require a combination of local fundraising efforts and grant aid.

“We’re at the stage now where we have applied for the sports capital grant,” says David.

“And we have some funding of our own. We are running a draw every year.

“We have around €21,000 at the moment. And for the first stage of the capital grants, we need around €35,000 for what we are applying for, to meet the matching funding, as such.”

An ambitious project, it will have to be completed in a number of phases. The first phase, expected to cost around €195,000, involves the construction of the playing pitch and running track with lighting. A perimeter fence will go around the whole site.

The second stage will be to develop the playground, exercise equipment and sensory garden. The whole project is expected to cost somewhere between €400,000 and €500,000.

As of now, it’s all ready to go if funding is secured. For the sports capital grant, they should know by the end of July or the beginning of August. Meanwhile, local fundraising efforts are more crucial than ever.

Last year, the committee had their first community park draw, and it was a great success.

“We are a very small committee, but received some great help from people outside the committee with the selling of the tickets,” says David.

“We would be grateful again this year for any help in selling tickets for this year’s draw. We received some great feedback last year when we were going around selling tickets.

“We as a committee are only to aware that it is a very difficult time financially on families so we agreed at the beginning of the year to only run the draw as our main fundraiser.”

The draw is likely to run for the next four years at least, until such a time as the project is completed. The committee is also open to other support opportunities such as sponsorship.

David says the all-weather playing pitch, as soon as it is up and running, will likely generate some funds to go towards the running and development of the park. Any excess funds left over after the project is completed will be put back into other organisations in the community.

The next draw will take place later this year on Saturday, September 20. Tickets will be €20 each, or three for €50.

“We need people to support this draw; we feel that if every family can contribute what they can to support this project, it will happen sooner rather than later,” says the development committee.