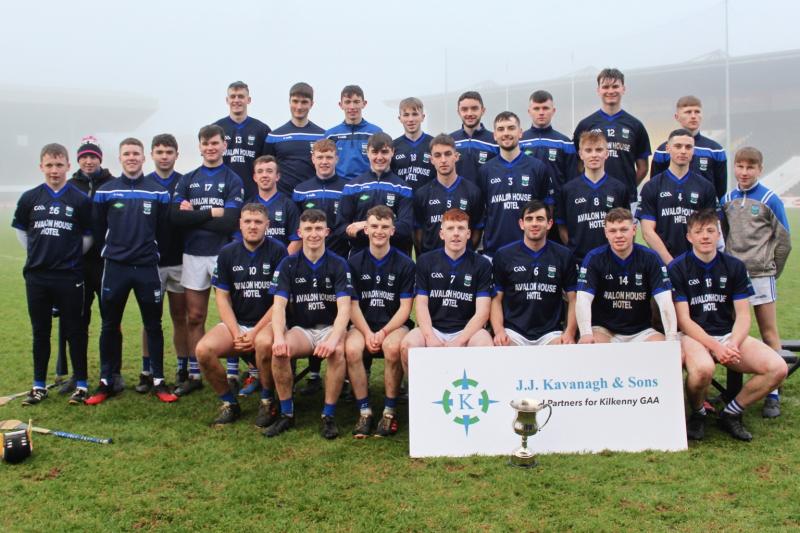 The Erin’s Own side who beat Lisdowney in last Sunday’s JJ Kavanagh and Sons Under-21 Roinn B hurling championship final at UPMC Nowlan Park. Picture: Willie Dempsey

Many Kilkenny households woke Sunday morning to a dense fog which threatened to disrupt a number of matches around the county, but thankfully all under-21 games went ahead without issue.

One of those was the JJ Kavanagh & Sons U-21 B County Final encounter between Erin’s Own and Lisdowney.

Upon arrival at UPMC Nowlan Park, visibility was severely reduced but thankfully the fog lifted enough for referee Eddie Crowley to give the green light and, coupled with the more visible yellow sliotars, the county final went ahead as scheduled much to the relief of the teams.

Jamie Maher opened the scoring for Erin’s Own in the first minute before they extended their lead when Conor McMahon spotted Tommy Coogan behind his marker and his pinpoint pass to Coogan gave him a clear run on goal and the first green flag of the afternoon was raised after a minute and a half.

Another puckout won by McMahon in the fifth minute eventually found centre forward, Jack Buggy who sidestepped his man and buried the ball in the back of the net.

Lisdowney opened their scoring after 10 minutes following a long pass from their corner back, Richard McEvoy to Luke Holohan.

Lisdowney seized another scoring opportunity when a great block down by James Phelan was directed towards Gary O’Sullivan who pointed from the middle of the park.

Points from placed balls by both Aidan Tallis and Jack Buggy then closed out the first quarter with Erin’s Own ahead 2-2 to 0-3.

Erin’s Own were first to pounce just 20 seconds after the waterbreak and Shane Coogan, whose work rate throughout the 60 minutes was commendable, saw Jamie Maher making a run towards goal. Maher was soon surrounded by a number of defenders but he powered through and scored the ’Comer side’s third goal of the day.

Lisdowney’s Aidan Tallis accurately pointed the next three, all from placed balls.

A Dean Brey pass to Shane Coogan in the dying minutes of the first half gave Coogan his first point of the afternoon.

Aidan Tallis kept the Lisdowney scoreboard ticking over with another two points, one a pointed free, to keep them in contention going into the break.

Shane Coogan took up where he left off in the first half with a superb point from just on the sideline in the 32nd minute.

The war wasn’t over yet but Erin’s Own were winning many of the battles around the park and some great defending by James Brennan in the 33rd minute resulted in Tommy Coogan raising his second green flag of the day when the ball was fired to the bottom left hand corner of the Lisdowney net.

Lisdowney responded when a momentary lapse of concentration by the Erin’s Own defence was capitalised on by David O’Carroll who buried the ball in the back of the Erin’s Own net.

However, three unanswered points from Shane Coogan and Jack Buggy (two frees) gave Erin’s Own a nine point advantage at the second waterbreak (4-8 to 1-8).

Eoin Kenny scored a hard-fought point from a Jamie Maher pass in the 51st minute and Maher himself scored Erin’s Own’s final two points of the game in the 53rd and 60th minutes.

Lisdowney’s only score of the final quarter came in the 62nd minute when a long range free from Richard McEvoy saw a huge scramble outside the square. In the melee, the ball was dispatched to the back of the net.