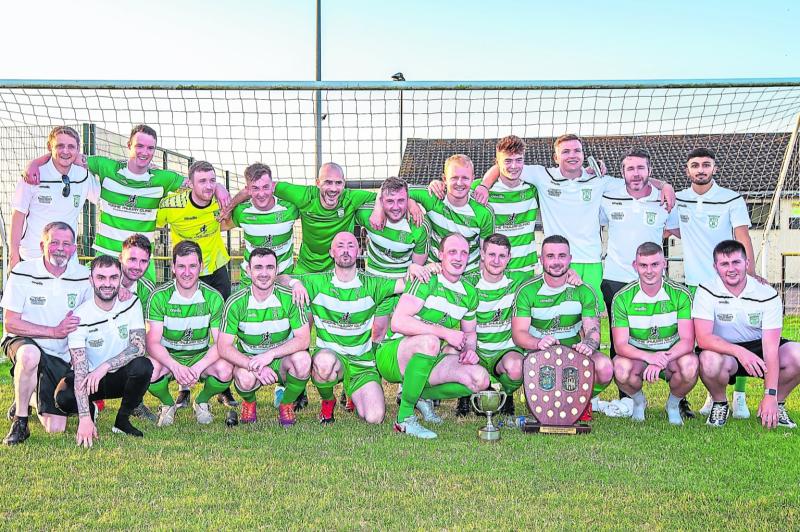 It was all about cup competition on the Kilkenny soccer front in 2021 and in that regard it proved to be a hugely successful few months for city side Evergreen who claimed a pair of trophies.

The global pandemic brought a halt to any league action so once more the McCalmont Cup took centre stage, even if it occurred a little later in the year.

City rivals Evergreen and Newpark advanced to the showpiece decider which took place on a roasting Friday evening in the middle of July and it proved to be a very close encounter.

Newpark pushed their more illustrious opponents to the wire but eventually Evergreen found a way to secure a fourth successive cup crown with Mikey Drennan netting a penalty late on to secure a 1-0 victory.

It was the club’s 17th title in their history and it helped them round off the season in style after they earlier beat Freebooters in the Pat Maher Shield final.

Drennan again took centre stage with a brace of goals enabling him to grab the man of the match award as his side ran out 4-1 winners over Freebooters.

Lee Delaney and Mark Slater also netted for the winners and although Mikey Clifford got a goal back for ’Booters, it still arrived much too late as Evergreen took a comfortable victory.

It wasn’t all disappointment for Freebooters though and they did finish the season with some success after running out 5-0 winners over Laois side Clover United in the Mock Lawlor Premier Cup final.

Elsewhere the Division One Billy Leahy Memorial Cup went the way of Evergreen B after the city side’s second string came from behind to beat Newpark 3-1.

The Division 2 Ken & Michael Byrne Cup final then went the way of Freebooters C after they enjoyed a 1-0 success over Castlewarren Celtic.

The final piece of silverware for 2021 duly saw Tullaroan overcome Evergreen 46 in the Division Three Jim Maher Memorial Cup final after the sides engaged in a five goal thriller with Tullaroan doing enough to seal 3-2 victory.