Willie Mullins continues to Lord it at Punchestown 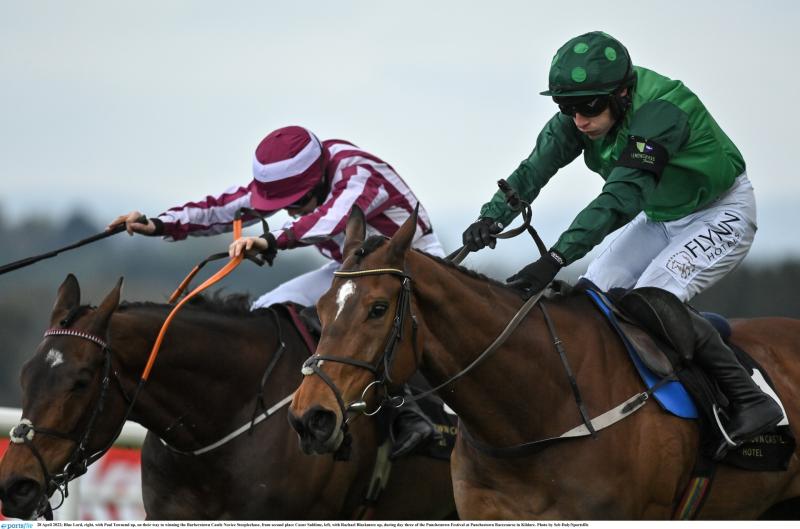 It really has been a dream week for Willie Mullins and Paul Townend. The Grade 1 races just keep coming for Ireland’s respective champion trainer and jockey as Blue Lord got up in the shadows of the post to deny Couer Sublime in the Barberstown Castle Novice Chase.
Having earlier combined with Klassical Dream in the Ladbrokes Champion Stayers Hurdle, Mullins and Townend were celebrating again as the 2/1 favourite claimed his second Grade 1 of the campaign after winning the Irish Arkle at Leopardstown back in February.
“I was concentrating more on the horse in front, Saint Sam, and how he was jumping,” admitted Mullins. “He was fiddling a few of the fences. I was wondering was there enough pace in front then for Blue Lord and Haut En Couleurs as well.
“They quickened at the fourth-last. I thought Saint Sam was running a cracker until he genuflected at the second-last. Then I couldn’t believe how much Paul pulled out of our fellow because I thought Coueur Sublime had stolen the race between the last two.
“But Paul said to me he didn’t want to appear in front too soon ‘cos I think in Leopardstown when he appeared in front, he looked all over the place and indeed he did that again today. Once he gets in front, he just thinks the race is over and he loses concentration, so Paul just timed it perfectly. He timed it beautifully.”
The winning rider was once again beaming afterwards.
“He was actually quite keen early on which was surprising but it was a good sign I suppose,” said Townend. “He was enjoying. Every time he saw a fence he flicked his ears and attacked it.
“I was just trying to delay my challenge a little bit down the straight because he doesn’t kill himself when he hits the front.
“He came down out of the air today. The day he won in Leopardstown, he got an awful fright at one of the early fences, and he just seemed to jump up in the air after that. He loved and attacked his fences there and you couldn’t be happier with him.
“There’s a lot of fences around here. They’re big, solid fences but they’re very inviting and you can make so much ground when you’re jumping as well as this lad does.”
There was British success on Day 3 as Lilith and Rex Dingle justified the faith of trainer Anthony Honeyball in the Close Brothers Irish EBF Mares Handicap Chase.
The Newbury winner seems to be a mare on an upward curve and Honeyball’s decision to roll the dice in Punchestown proved fruitful.