A native of Glasgow she loved to travel but made Kilkenny her home, contributing to the local arts scene 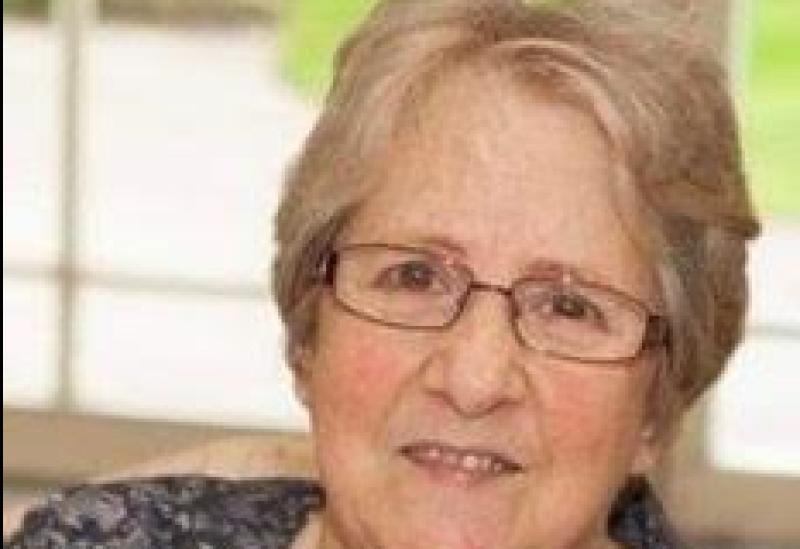 The death of Patsy Crimin, Millennium Court on August 3, after a short illness, has caused much sadness in the community, particularly for her family and also her friends in the Art and Writers Group.

Patsy died peacefully in her home in the care of her family. She was a much loved and valued person and she will be sadly missed.

Patsy was 78 and was one of five children born to Jack and Josephine Downs, in Glasgow. Predeceased by her brothers Lawrence, Joseph and Vincent she lived in Glasgow for a good part of her life, raising a family of three. Patsy spent some time working in the Asylum for the Blind in Glasgow.

She made her home in Bennettsbridge almost 30 years ago. Initially she lived in Maidenhall, her home from home, and was held in high regard by the Butler family. Twenty years ago she came to live in Millennium Court and was so proud of her new home which she absolutely loved. She entertained her friends, including the writers group, there on many an occasion, but she still maintained contact with Maidenhall and Suzanna Crampton who was a good friend.

Through Patsy, the Writers Group and Bennettsbridge Art Group had access to the wonderful Maidenhall for meetings and during the pandemic many outdoor painting sessions were enjoyed in the magnificent gardens.

Patsy was an avid reader and loved biographies and books with historical content. She also loved to travel and did so extensively. In her younger days she took part in the Dublin Mini marathon on a few occasions. She was proud of her Scottish roots and returned to Glasgow often to visit her family and friends.

Books
Patsy contributed to three books published by the Bennettsbridge Writers: Daughters of the Wind, Tangerine Skies and Meet Me Halfway. Her quirky style and way with words was unique.
In one of the books, Meet me Halfway, which was published with the Derry Writers in 1996, a story by the late Phil Kennedy, ‘The Mighty Oak’, related to an oak tree planted when the Derry Writers came on a visit to Bennettsbridge. There is a passage which has a Patsy connection...

“One day recently a lady came by wheeling a sort of motorbike. I heard someone say it was a ‘moped’. Every so often the woman tried to start the engine. I believe it is called ‘kick-starting’. After a few attempts, she succeeded and I could hear her singing something about ‘Belonging to Glasgow’ as she chugged out of sight”. Patsy was so chuffed and appreciated the mention…….we all knew who the lady in question was…….

One of her proudest moments was when she accepted an NIACE Group Learners Award in London from David Blunkett, Labour MP, on behalf of the Bennettsbridge and Derry Writers In recognition of their achievement in learning together as a group and of the contribution this had made to the community.
At Christmas time, she loved making the cards for the Art Group’s annual project for the local Vincent De Paul and would be collecting the material for weeks beforehand.

In mid-June, Marion Murphy opened her house for Patsy’s sister Anne’s birthday celebration. Patsy was in great form that day and even sang a duet with her sister, Anne. We weren’t to know that it would be our last day together as a group. That day will be our abiding memory of her.

She was a volunteer in the Noreside Resource Centre, Kilkenny for a number of years. The local craft industry benefitted from her great rapport with people and she worked as salesperson with Bridge Pottery, Mosse’s Pottery Shop and spent some years in the local Moth to a Flame candle shop.

A talented artist, an exhibition mounted by the Art Group in the Bennettsbridge Credit Union window contains some of her work and is dedicated to her memory
Patsy will be sadly missed in the group but we will remember the good times. She has now joined those who have passed on, including Phil, Eileen, Anne and her good friend Patricia.

Legacy
She leaves behind a rich legacy in her children, Audrey, Suzanne and Denis; grandsons Steven and Keith and great granddaughter Emily; her extended family particularly her sister, Anne and many neighbours and friends.
Patsy’s remains were met in the village by family and friends who formed a guard of honour to St Bennett’s Church where Canon Pat Duggan officiated.

Requiem Mass was celebrated by Canon Pat Dalton. He welcomed Patsy’s family, especially those who travelled from Glasgow and offered them sympathy on behalf of the parish. He sympathised with Denis, her son, who was unable to be there.
Fr Pat met with Patsy on a number of occasions, bringing her the Eucharist. He was most impressed with the courage, humour and dignity with which she accepted her illness.

The lessons were read by Anne McLoughlin (sister) and Marion Murphy (friend). Prayers of the Faithful were recited by Peter McLoughlin (nephew) and Larry Kinsella (friend). Her friend, Eithne from the Book Club read one of Patsy’s poems.
A tribute to Patsy was given by Joan Cleere.

The wicker coffin bore a splendid arrangement of flowers from the gardens of her beloved Maidenhall.
Throughout the ceremony some of Patsy’s favourite classical music was relayed over the speaker.
Family and friends accompanied Patsy on her final journey to Tullaherin where the prayers were said by Fr Pat and she was laid to rest.

Afterwards refreshments were provided for family and friends at the outdoor setting in O’Donnell’s Bar.
Patsy is survived by her children Audrey, Suzanne and Denis; sons-in-law Colin and Johnston; grandsons Steven and Keith; their partners Cheryl and Holly and her great-granddaughter Emily. She was predeceased by her husband Eddie. She is also mourned by her sister, Anne, in-laws, nephews, nieces, extended family, neighbours and a wide circle of friends.

Elma Khareghani shared her memories of Patsy in a poem. The following is an excerpt:
I saw you lay quietly in the basket
An unknown factor according to one
You let your thoughts and opinions soar
Beyond boundaries through your choice of books
The rendition of lines descriptive and choice
Pared well back got to the soul of the piece
Written in rooms of an attic cottage and hearth
The loss of your presence in the Community Hall
Will be felt by each of us who knew
The cheery side of our dear friend Patsy
Who loved to wine and dine with delight
Joy and laughter fill that very place
At your witticisms and the quirky phrase
Sail on into those Tangerine Skies and
Keep a space aside for those crosaire days
Thank you for that moment of thought
As you penned a note to me
I got last week a day after you died.
Thanks Patsy for everything, especially your ‘Patsyness’. It was a privilege to know you.
- JC