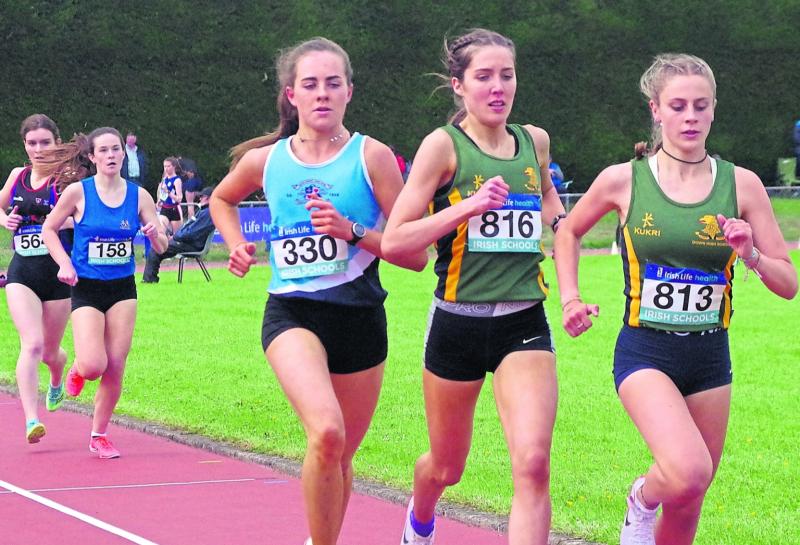 Athletics is back to its old days of glory. Each week, scores of Irish athletes are competing at races abroad, seeking qualification times and points.

In Norway, Andrew Coscorcan won the Jessiem Classic while Israel Oatlunde broke the 100m record in Austria. There were season’s bests also for Marcus Lawlor in the 200m and Chris O’Donnell in the 400m.

The schedule is just as busy in Ireland, with multiple events being held each week. There was a hive of domestic activity with the Irish Schools on Saturday and the Leinster under-12 and under-13 championships and pairs on Sunday. Tullamore was the base for both days.

Kilkenny athletes did very well at the All-Ireland Schools on Saturday. The county picked up two gold, two silver and three bronze medals, along with multiple fourth place finishes, highlighting the talent that is flowing at present. 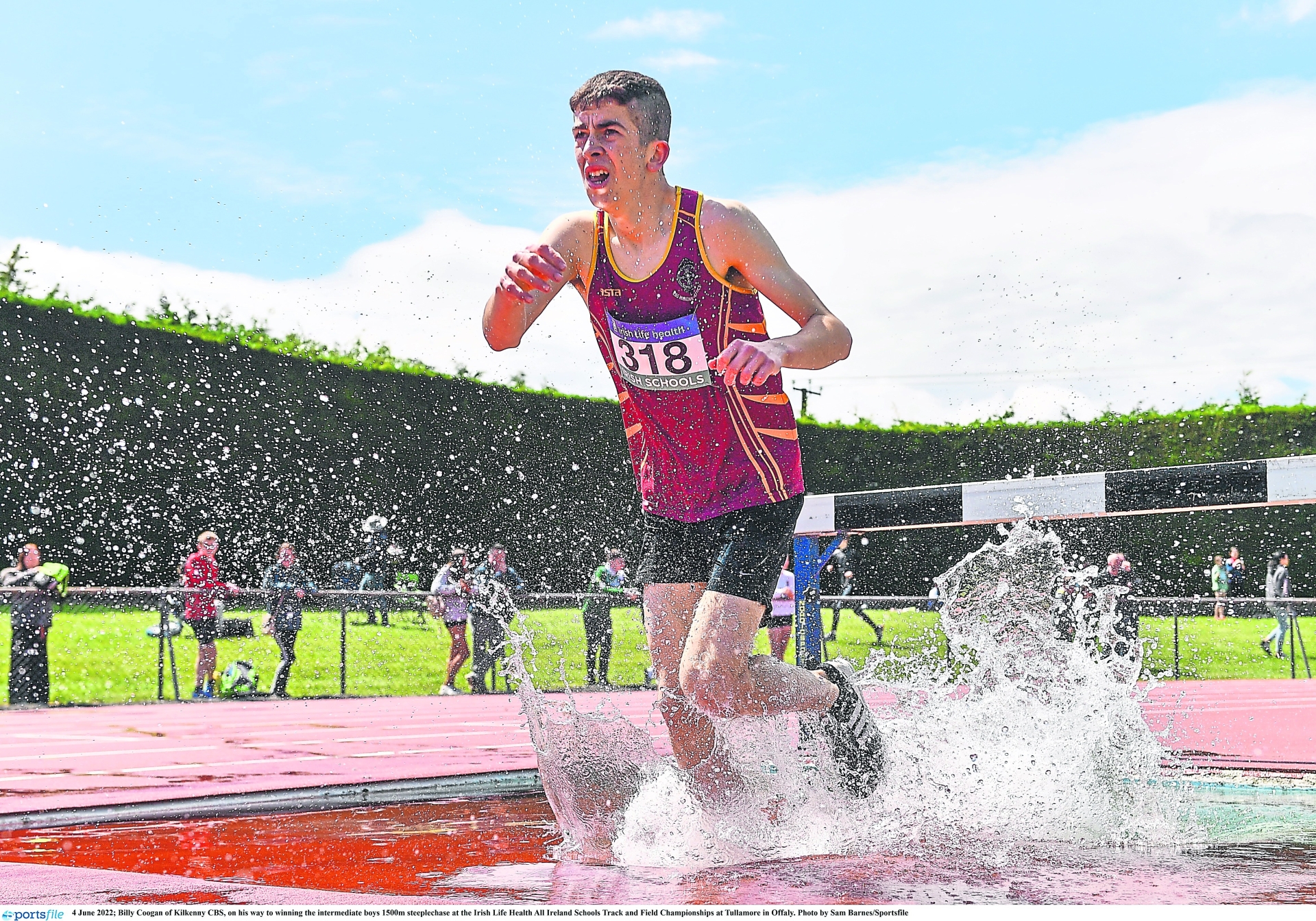 In Tullamore Billy Coogan swapped his Gowran singlet for the maroon and yellow of Kilkenny CBS and took part in his signature event – the steeplechase.

Competing over a distance of 1,500m – one of the shorter steeplechase distances athletes encounter, Coogan looked strong and fit as he easily tackled the barriers and water jump.

Known predominantly as a cross-country runner, Coogan has found it challenging to replicate his cross-country success on the track. He took up steeplechase a number of years ago and worked hard to master the barriers and water jumps. Setting up practice barriers in the garden, he gradually began to improve his technique.

Success came last year when he qualified for the SIAB international in the steeplechase. This year, he navigated barrier and barrier and easily cleared the water jumps.

Showing a marked improvement over the last 12 months, his winning time of 4.35 was six seconds ahead of the second placed athlete Sam Murray (Dublin). This was Coogan’s first schools All-Ireland title.

In the senior girls 1,500m Kirsti Foster (Downpatrick High School) and fellow Willowfield Harriers clubmate Rebecca Rossiter were the pre-race favourites. Rossiter was a convincing winner of the Schools All-Ireland Cross Country in Mallusk back in March of this year while Foster has already surpassed the European under-18 1,500m mark of 3.31 several times and is on the selection list for Jerusalem.

Also taking part was Kilkenny’s former Irish Schools cross-country champion Hannah Kehoe (Loreto). Back in 2019 she finished third in the 1,500m in a time of 4.51. The previous year she had set a new personal best when she finished second to clubmate Fiona Dillon in a time of 4.43.

A year later, after recording a personal best (PB) of 10.49 over 3,000m she failed to finish the 1,500m the next day due to injury. That same injury was to plague Kehoe over the cross-country season and into the Schools cross-country in 2020.

Then in March 2020, Covid hit. This gave Hannah a chance to work on rehabilitation for the injury. Coming back stronger and fitter, gone are her injuries and her old form has started to return.

From the outset, Kehoe stuck to the heels of the two Downpatrick girls. On lap two she had to dig deep as Kirsti Foster injected some pace, but covered every move.

At the bell, the Loreto student took a gamble and moved ahead, forming a gap of three metres. While Rossiter made some attempt to claw back that deficit, it was too late.

In what was a new PB of 4.31, Hannah Kehoe became the new seniors schools 1,500m champion. This was also her first schools All-Ireland title. 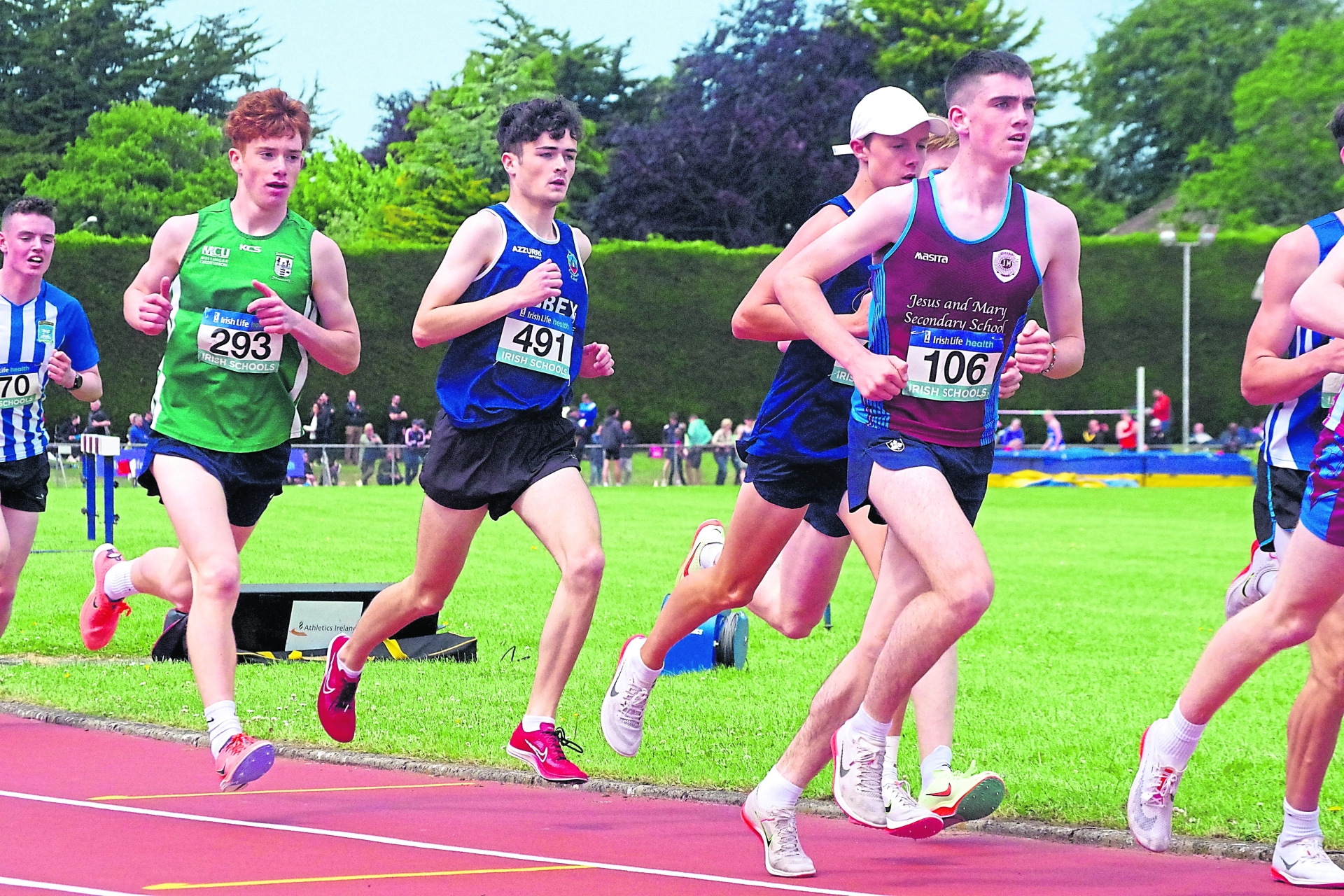 Gearoid Long (Abbey CC) was fifth in the intermediate 3,000m

The junior girls’ walk produced one of the finishes of the day. Savannagh O’Callaghan (Tuam) went out in front for much of the race and had built up a substantial lead after 800m - but this is where things started to change.

Chasing hard behind were Lily Ryan (St Joseph’s AC) and India Cunniffe (Tuam). With 100m to go, the pair were rapidly catching up on the fast tiring O’Callaghan. Cunniffe caught O’Callaghan with three metres to go, leaving Lily Ryan so close to taking silver. The St Joseph’s AC athlete had to settle for bronze in what was one of her best races to date.

Born in Argentina, Matias certainly possesses the sprinting gene of his mother and the strength of father Federico, who was a former member of the Argentinean national rugby team. There was another silver medal for St Kieran’s College as Daire Mahon finished second in the senior high jump.

Daire Casey-Power (Abbey CC) was third in the junior javelin with a throw of 34 metre, while Ailbhe Steiger was second in the junior girls’ triple jump.

There were plenty of other great performances from county athletes and plenty more opportunities to show their ever improving talents as the season progresses.

While this marks the end of the schools competition for most, there is still the Tailteann Games for others at the end of June. This is for intermediate athletes and will determine who is selected for the SIAB international.

The first of the Athletics Ireland provincial championships got underway on Sunday with the under-12 and 13 championships along with the pairs in Tullamore.

The numbers competing in each race were certainly indicative of a healthy appetite for athletics in the country. There were upwards of eight heats in some of the middle distance races – making any leap onto the podium a very significant medal winning performance.

With the great success from the schools championships behind the county, Kilkenny’s younger members represented their clubs with distinction in these events.

Joe Doyle (St Senan’s) replicated the title he won at under-12 level when he threw 8.73 on his final throw to beat indoor champion Noah Treacy (Kildare AC). The newly crowned under-13 champion produced three stunning final round throws that made throwing the shot-put look easy. There was further success for Kilkenny when Evan Ryan (Gowran) finished third. 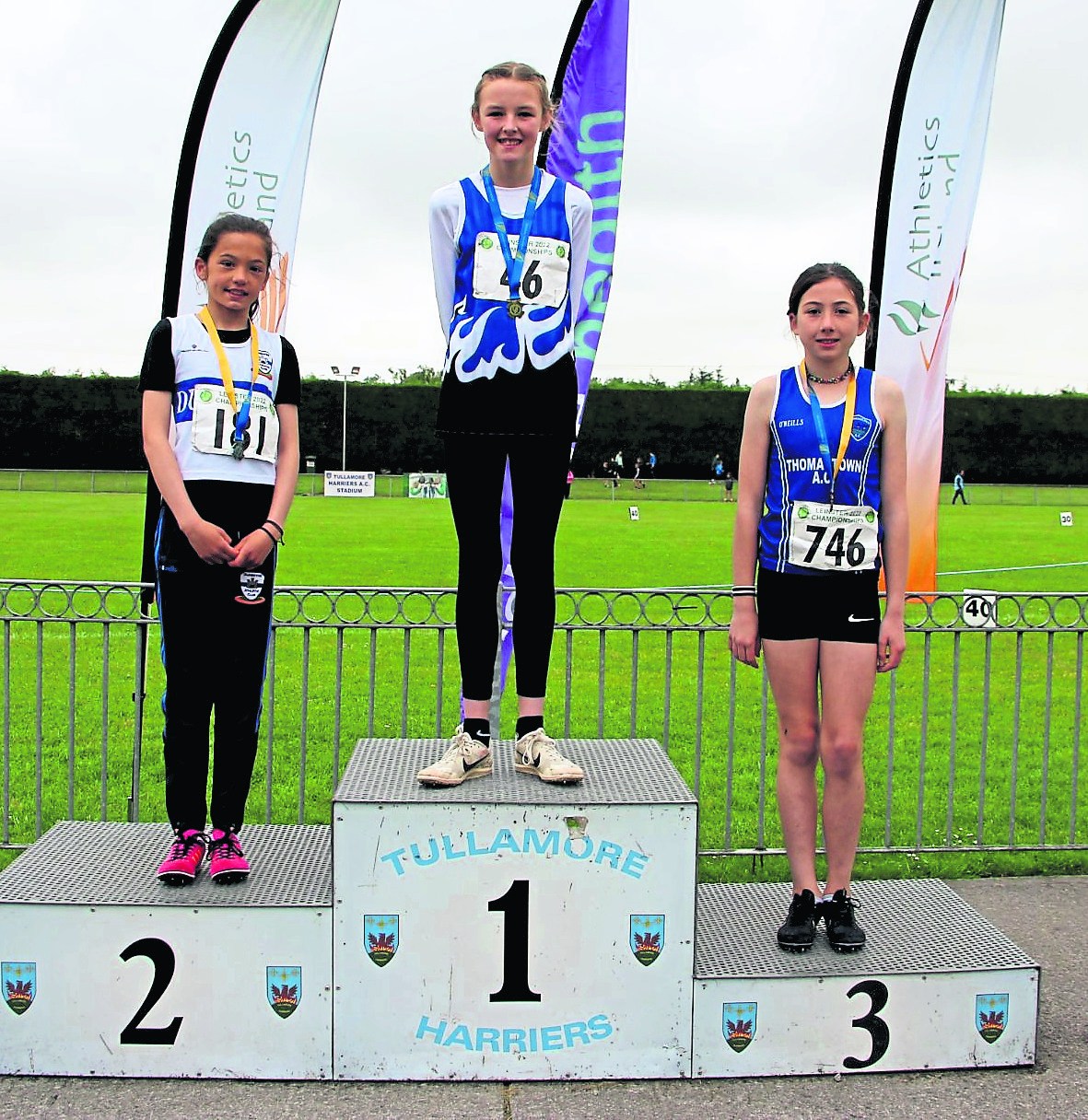 These three athletes have dominated sprint running in their age group in Leinster. Having taken the top three honours at the Indoors in March, they have now replicated that event - it is not often a county can achieve such a finish.

Thomastown took home two high jump medals. In the girls’ under-12 high jump Mia Brennan jumped a new PB to take bronze. Brennan cleared 1.25 on her first jump, but failed to clear the next height of 1.30. This left the way clear for Ava Wilson (Bree) and Molly O’Reilly (Dunboyne) to take gold and silver. The winning jump of 1.41cm was higher than in the under-13 event.

Inspired by her clubmate’s success, the talented Zoe Beck performed with distinction in the girls’ under-13 event. Beck took silver with a jump of 1.30cm. Thomas Hayes (KCH) took bronze in the boys’ under-13 high jump.

There were no medals from the middle distance events, which is surprising considering the county had a very strong group at under-12 boys’ level for cross-country. Zak Fenton (St Senan’s) was the highest-placed athlete when he came fifth in the boys’ under13, finishing in a very respectable time.

There were lots of Kilkenny athletes in the pairs events. The top three teams will go on to the All-Irelands in a month’s time. In these events, two athletes from each club compete in the same event. Their combined time (running) or distance (field event) count as their overall club score.

Thomastown AC had three teams competing in the girls’ under-9 age group and took home two team gold and a team bronze medal.

Kilkenny City Harriers also took home medals in the pairs, with plenty of success in the long jump in particular. The city club has always had good success at events such as long jump, paving the way for future long jump stars in Kilkenny.