Evergreen round off season with more silverware after Premier Cup win 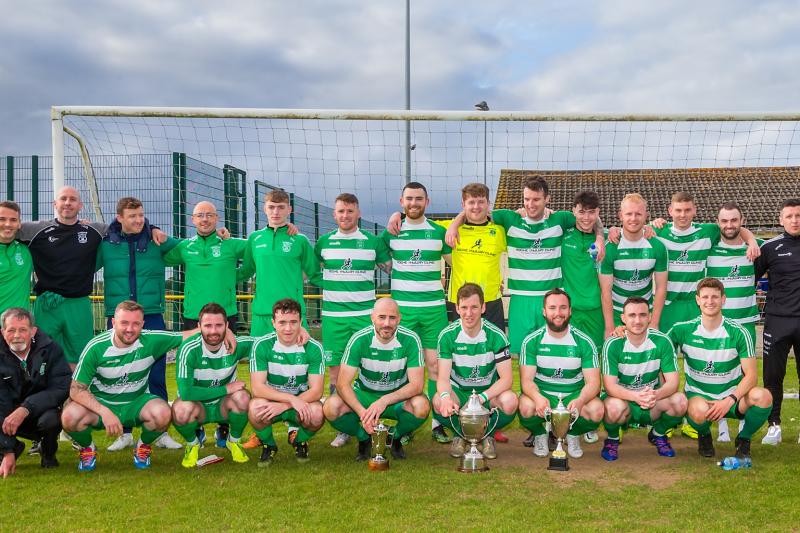 The Kilkenny junior soccer season came to its conclusion last weekend with two games of interest down for decision.

In Derdimus, Evergreen and Thomastown again clashed horns in a cup decider with honours in the Junior Mock Lawlor Premier Cup Final down for decision on Sunday afternoon.

City side Evergreen were chasing their third trophy of the season after already collecting victories in the McCalmont Cup Final and the Junior St Canice’s Credit Union Premier Division and true to form they duly added another title in a match that was a rematch of the McCalmont Cup showpiece a couple of weeks earlier.

Evergreen were 4-0 victors over Thomastown in that McCalmont decider but the Grennan men certainly competed more valiantly on this occasion.

Thomastown were in the game until Evergreen’s Sam Johnston broke the deadlock in the 38th minute as he fired home inside the box as the league champions went into the break with a 1-0 advantage.

Thomastown stayed in contention in the second half but a late own goal eventually scuppered their efforts as Evergreen claimed a first ever Premier Cup success with a 2-0 win over their rivals.

The win rounds off brilliant season for Evergreen as they dominated all before them in Kilkenny.

Earlier in the day St Canice’s made the journey to Castledermot as they faced off with Kildare outfit Leixlip United in the LFA Junior Plate Final.

St Canice’s were taking on an under-20 selection from Leixlip and in a tightly fought affair it was Leixlip who came through to enjoy a 1-0 victory over the Kilkenny opposition.

Like Evergreen, St Canice’s were looking to add a third trophy to their season’s cabinet but it wasn’t to be for the Division 2 side who have to be content with success in the Junior Eamonn Maher Coach Hire Division Two League and Junior Div 2 Ken & Michael Byrne Cup Final.

Sunday’s results brings an end to the 2021/2022 season and much credit must go to the organisers in what was the first full campaign since the covid pandemic and the players can now enjoy a summer break before returning to action in a couple of months.