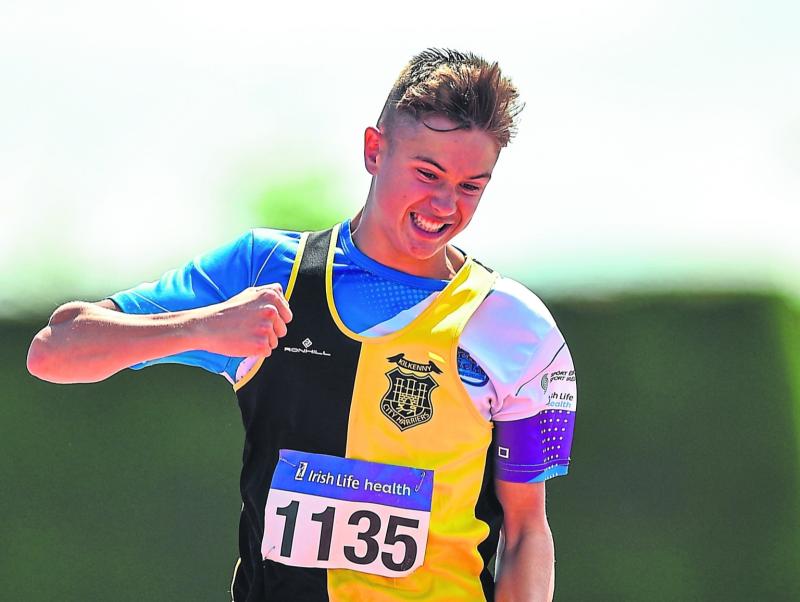 There was another action-packed weekend of athletics with days two and three of the National Juvenile Championships in Tullamore.

An overcast Saturday was followed by a sweltering Sunday, where athletes struggled to stay cool in their warm-up!

Beyond the medal haul there were some amazing performances too, with plenty of personal bests and first-time national appearances.

There were medals won across many events including; walks, middle distance, sprints, discus, javelin, hammer, triple, long and high jump – only hurdles eluded the county on this occasion.

Hannah Kehoe (Thomastown) was a double gold medal winner. In the 3,000m on Saturday she not only won her event in a new personal best (PB) of 9.49 but also set a championship best performance too, beating Breffini Twohig’s 9.50 which was set in 2005. Emma Landers (Youghal) was second with Kilkenny City Harriers (KCH) athlete Meabh Richardson third. This was Meabh’s first individual national medal.

On Sunday Hannah took another gold, this time in the 1500m. This medal was hard earned as she was pushed all the way by Ennis AC athlete Nessa Ni Ainifein and Catherine Martin (City of Lisburn).

Just like she did in the schools All-Ireland, Hannah took the lead with 400m to go and could not be caught as she entered the final 100m as the leader. She completed the race in a time of 4.38. 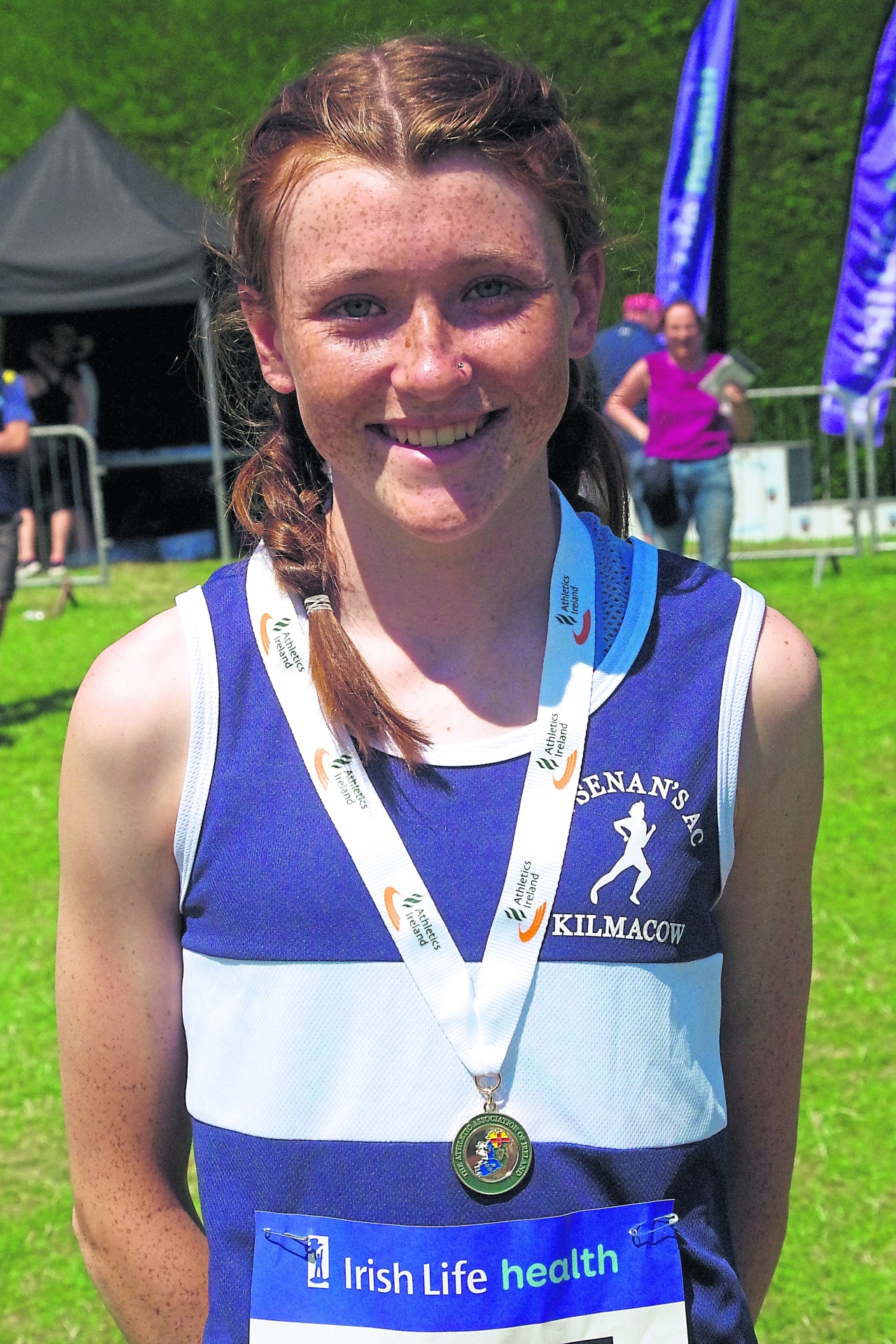 Eve Dunphy (St Senan’s) was all smiles after her under-16 triple jump win Picture: Perri Williams

Eve Dunphy (St Senan’s) took gold in the under-16 triple jump. Her final jump of 10.73 surpassed the CB performance of 10.66, however as the wind speed was point three above the legal limit of two, it will not be recognised.

Events like sprints and jumps must adhere to wind speeds. She did however, set a PB and has the gold medal to boot. This is a momentous effort from Eve, who only took up the event in April this year.

Molly Daly (KCH) looked brilliant in the heats of her 200m as she easily won in 25.97. She followed this up with a new PB of 25.42 in the final as she held off a challenge from Eadaoin Lynch (Shercock). Lynch finished second in 25.58 with Erin Friel (Letterkenny) third.

In the 250m hurdles she was not as fortunate when she took a tumble at the first hurdle, effectively putting her out of medal contention. She bravely regained her composure and finished the race to great applause. 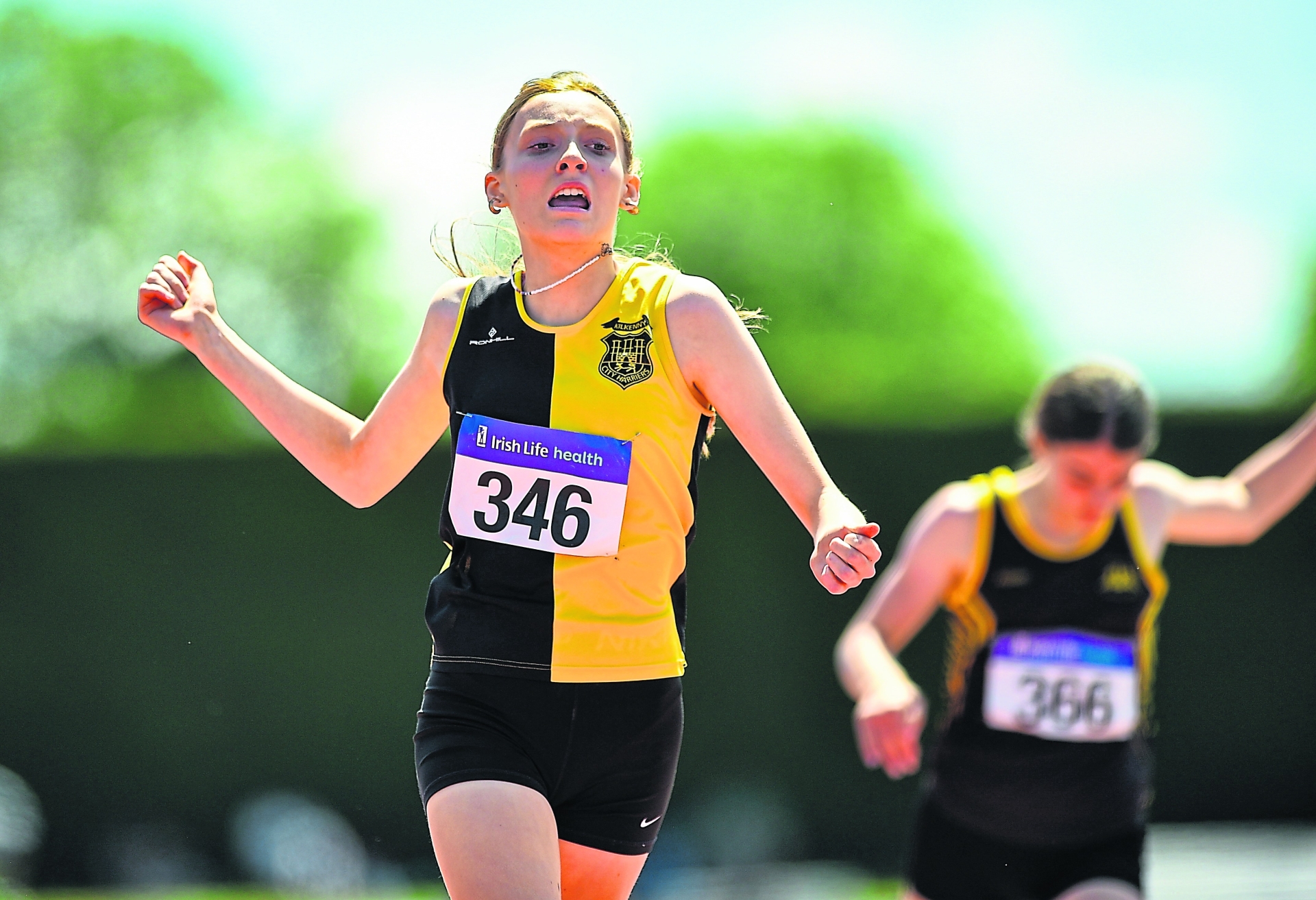 There was gold too for Andrew Cooper (Gowran) as he won the boys’ under-17 shot-put. Cooper threw a fantastic first round throw of 15.12 – the mark that would make him the overall winner by a 22cm margin.

The under-17 championship best performance in the shot-put is held by John Kelly of Finn Valley who, this week, was selected to compete in the World Athletics Championships in Oregon. The record of 16.80 has stood since 2012.

Matias Quaglia (KCH) secured the final gold for the county when he won the under-14 200m. The Argentine-born athlete looked impressive in the 80m on Saturday when he secured a PB of 10.04 to win his heat. He went on to finish second in the final to Chris Diosansma (Nenagh).

Throughout the day there were some fantastic races to watch, like the boys’ under-17 1,500m where there was yet another duel between Sean Cronin (Clonliffe) and Darragh Mulrooney (Moy Valley) with the Clonliffe athlete yet again outkicking Mulrooney.

In the under-18 1,500m it was St Senan’s athlete David Williams who looked like he was going to stamp his mark on the silver but he was beaten by one-tenth of a second into fourth place, his third fourth place finish in these championships.

Gearoid Long (St Senan’s) had a little more luck as he came from behind with 50m to go to take the silver in the 3,000m race.

This is the first track medal for Long, who also recorded a nine-second PB.

St Joseph’s got a look-in with the silver medals on Saturday as Evan Walsh had a superb walk to finish second behind Matthew Newell (Tuam). Evan was probably the most technically perfect walker in the race - all look forward to him joining a successful band of Irish race-walkers in the future.

Clubmate Lily Ryan has such a competitive age group. She fought hard for the duration of the 2,000m race. Lily and two other athletes were in contention for the silver and bronze medals, with Lily losing out by just seven seconds in the end.

Orla Brennan (Gowran) continued the throwing tradition of the Brennan sisters when she finished second in the under-15 hammer. Orla threw 34.66 in round three, her highest in the competition. Unfortunately, in this same round her lead from rounds one and two was relinquished as the eventual winner Eimear McBride (Lusk) threw 35.21. McBride won with her final throw of 35.77.

The Brennan girls have amassed quite a few national throwing medals between them, with the youngest of them Orla now showing her talents.

Another thrower to take a silver medal was Daire Casey Power (St Senan’s). Daire’s furthest throw of 41.70 came from the second round, where he took the lead. He held that position until the final round when Barry Langan (Lake District) lashed out a 43.56 to take the gold.

There were a number of bronze medals for Kilkenny’s athletes. Three under-19s made the podium to be draped in bronze, two as first-time national medal recipients. Meabh Richardson was third in the under-19 3,000m in a time of 10.00, knocking one second off her PB.

Daniel Griffin (St Senan’s) took bronze in the under-19 javelin also with a new PB. Mateusz Balcer (KCH) finished third in the under-19 high jump with a leap of 1.80m. Mateusz had a clean record all the way through, clearing all jumps on his first attempt.

Robert Powell (Gowran) was third in the under-17 discus. His final round throw of 34.66 was only 26cm off the silver medal. Another third-place finisher was Adam Slawinski (KCH) in the 200m with a PB of 23.24, a reward for being just outside the medals in the 100m the day before.

With the World Championships dominating the coming week, athletics enthusiasts will be keeping strange hours, staying up late or getting up early to catch a glimpse of the elite in action at Hayward field.

Meanwhile back home there is still plenty of action to focus on.

On Saturday the National Juvenile relays and the All-Ireland B Championships will be held in Tullamore. The junior and under-23 All-Ireland will also be held in Tullamore this year, as Santry is being resurfaced. There should be plenty of local talent on show, with Sophie Jackman (St Senan’s) in the 800m and Cathal O’Reilly (KCH) in the 3,000m, among others.

The AAI live event will be held on July 24, along with the combined events.

Closer to home the county 10km will be held at the Pink Rock on July 24 — note the change of date. Hosted by St Joseph’s AC, entries can be made through www.myrunresults.com The event starts at 11.30am.