Welcome back Liam! Having lost the 1999 All-Ireland final, Brian Cody led Kilkenny to glory in his second year in charge 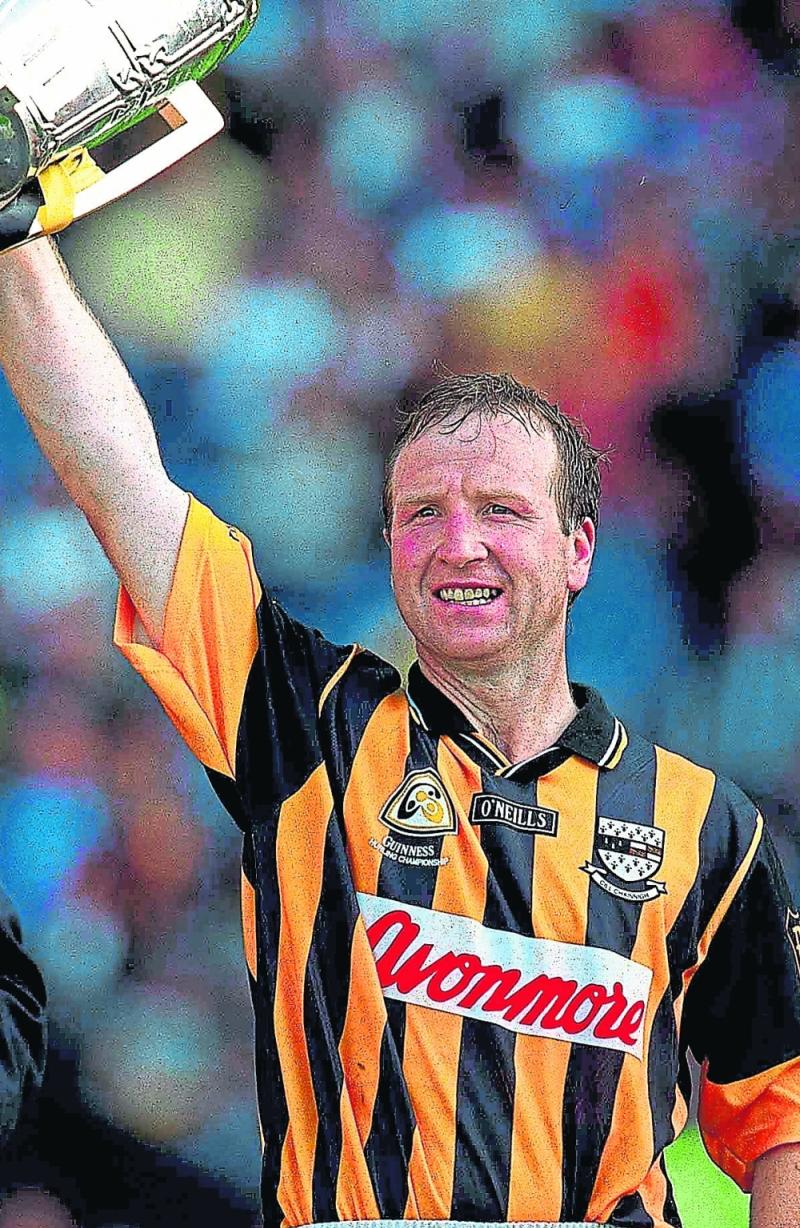 Kilkenny captain Willie O’Connor lifts the MacCarthy Cup after the Cats beat Offaly to win the 2000 All-Ireland final. It was Brian Cody's first as manager of Kilkenny.

We all got a sense of the utter joy and relief parents must feel after a child who has been lost is brought home safely. Embrace Liam. Cherish him.

Let’s hope he doesn’t stray so far or for so long again.

It has been a seven year odyssey tracking down the county’s 26th MacCarthy Cup success. And the quest became especially intense over the last, unnerving 36 months.

Yet, all the time, the message proclaiming our unaltered ambition was on an advertising hoarding near Croke Park.

It simply proclaimed: “You are never beaten until you give up.”

Proud Kilkenny would never give up the quest for gold in the All-Ireland senior hurling championship. All the same, back-to-back defeats in the finals of 1998 and ’99 upset the equilibrium, and went a way towards sowing the seeds of doubt.

On Sunday, a deadly mix of pent-up frustration and ambition exploded at Croke Park. Back door specialists Offaly weren’t just beaten, they were blasted to smithereens.

With a little over 12 minutes gone, and the roaring Cats already a healthy 2-4 to 0-2 clear, a man in front of the press box observed to a friend sitting beside him "They will well and truly close the back door today".

Already Kilkenny’s deadly trio on the inside line of the attack had scores on the ’board. By the day’s end they would have a stupendous 4-10 between them.

A team score that would win many a match, even an All-Ireland final!

It wasn’t the best final of all time. It was a long way short of a classic, and a shorter distance from a win of record proportions.

Kilkenny need make no excuses, however.

They caught hold of the match from the word go, and savaged the opposition like a rabid dog would a rag doll.

They were hit for a frightening 2-3 within nine minutes of the start. It took them over a quarter of an hour to get two scores together.

The balance of their tally came from the sweet stick of midfielder and captain, Johnny Dooley.

Still, we dared not allow ourselves the comfort of thinking Liam was coming home. Offaly had us spooked - mental scars after they floored us in 1998! Serious concerns too after the way they came from nothing following the mauling in the Leinster final to compose hurling poetry against defending champions Cork in the All-Ireland semi-final.

A 49th minute booted goal from Henry Shefflin, which swelled the difference to an uncatchable 4- 10 to 0-10, should have left us singing.

Again we dared not tempt fate, a cruel fate that dealt us nothing but hands of sorrow in recent times. Neither would we dare presume, for fear we might spirit the title away.

Offaly did have a good spell in the match afterwards Between the 59th and 62nd minutes they bagged 1-2, and a revival of sorts was threatened.

By that time, however, respectability was Offaly’s one and only target.

Kilkenny were uneasy, a mite ragged. This was more because they couldn’t finish good work - they hit five consecutive wides - than because of the danger presented by the opposition.

Then bang, bang, bang. One of the greatest victories ever by a Kilkenny team was sealed with a top up dash of class.

Offaly were riddled. Kilkenny’s quickfire attack plundered a goal through sub Eddie Brennan and then a pair of points through DJ Carey and Charlie Carter.

A super performance capped by a super finish!

Twelve months ago in the final the county cried out for an extra minute of play as we chased an equaliser. This time, as the hands on the clock swung past the 70 mark and on towards 75 minutes, we wished it could continue again. Our heroes were getting stronger.

As 39 minutes 24 seconds showed on the stopwatch, referee Willie Barrett blew the sweetest tune of the day. His whistle marked a successful ending to a quest that had tormented hurling folk on the Noreside, and had fascinated others far beyond.

DJ Carey buried the demons of finals past when he bagged a personal best tally of 1-4 for a senior decider. He answered the critics and doubters in emphatic manner.

Philip Larkin played with the tradition of two generations of All-Ireland winners behind him He wrote another magnificent chapter into an already proud family history.

Andy Comerford was a real powerhouse. At times during the opening half this sector operated on one wing. Andy bore full responsibility. He ran the show.

Peter Barry was another exceptional performer. He got on, and cleared, an awful lot of ball. Eamon Kennedy, Denis Byrne, Charlie Carter and Henry Shefflin were others who went close to attaining the maximum 10 for merit.