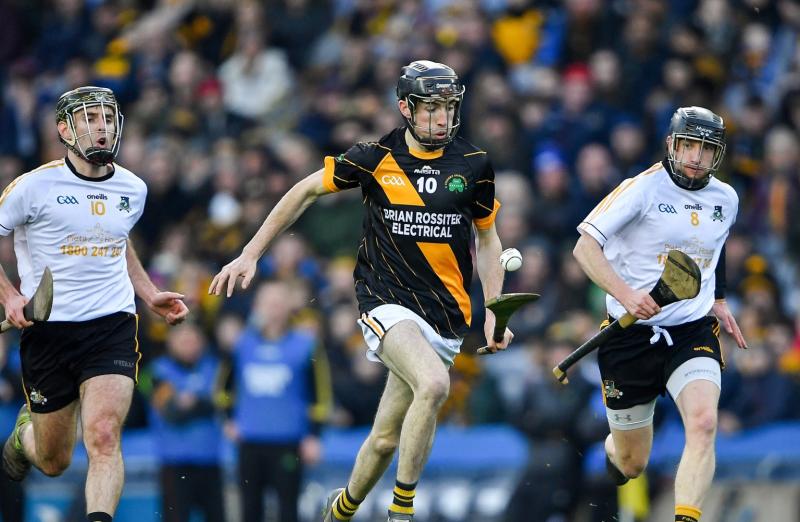 A strong final 10 minutes helped Conahy Shamrocks see off the challenge of near-neighbours St Martin’s (Muckalee) in their opening round intermediate league clash.

Both sides had their periods of dominance throughout an entertaining encounter at Canon Kearns Park, but it was Conahy who found an extra gear when it was needed to build a winning lead.

The opening exchanges were even as the teams swapped early scores. Edmond Delaney contributed scores from play, frees and a wonderfully-executed sideline ball while Tom Phelan and James Bergin also found the mark for Conahy early on. Brian Coady, Joe Maher, Dan Comerford and Shane Kinsella (from placed balls) found their range for St Martin’s.

The Saints drew first blood on the goal front when Dan Comerford broke through to lay off a pass to Brian Coady, who finished impressively to the net. Conahy responded well to this setback, as points from Phelan, Donal Brennan and the unerring Delaney helped them retake the lead and hold it until the half-time break, at which stage they were two to the good (0-11 to St Martin’s 1-6).

Keen to extend their advantage, Conahy made an ideal start to the second half when James Bergin laid off a pass to Mark Gunner, who had no difficulty finishing to the Martin’s net. The Saints responded with their second goal, Dan Comerford pouncing to whip the sliotar home after Conahy goalkeeper Karl Downey initially made a fine save. Once again, there was little between the sides as they swapped points over the proceeding 10 minutes.

Edmond Delaney was on top form, producing vital scores for Conahy at this time and indeed throughout the game, as he ended his day with 12 points in all from play and frees. Conahy took heart from this and when Tom Phelan broke through to slam the ball to the net for their second goal, it helped them open up a four point lead.

Martin’s responded with two more points from Shane Kinsella (free) and John Mulhall, whose effort could have easily been a goal, but their challenge was eventually killed off when James Bergin capitalised on a breaking ball to find room to score a fine goal.

This was followed by a Edmond Delaney pointed free, which finished the scoring and left Conahy as seven-point winners. Conahy, delighted to get up and running with a win, will face Dunnamaggin in round two on Friday. For St. Martin’s, they must hope to bounce back quickly as they take on Young Irelands (Gowran) at the weekend.