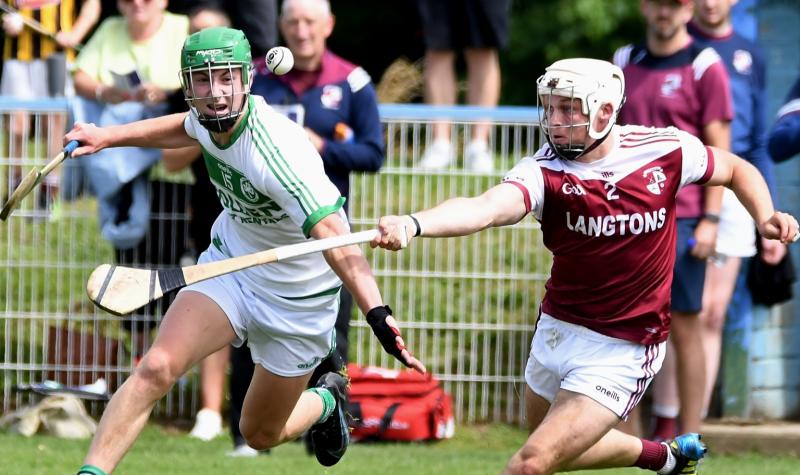 An enthralling clash in front of a packed attendance in sundrenched Thomastown last Sunday saw Clara overturn a seven point deficit entering the final quarter as they emerged victorious in a contest that produced a dramatic finish.

The 4-in-a-row County Champions with County Senior Eoin Cody in exceptional form were the better team for the majority of the match & they were cruising towards victory as they led 1-21 to 1-14.

However, led by the outstanding Liam Ryan, Clara began the comeback.

Three points in succession in a three minute spell between the 45th & 48th minutes narrowed the gap to four points(1-21 to 1-17) as Liam Ryan struck two superb long distance points from play sandwiched in between a Jason Byrne free.

Points from the excellent Ronan Corcoran & Niall Shortall steadied the ship(1-23 to 1-17) but after Eoin Cody squandered a glorious goal chance in the 50th minute, Clara rallied again.

Jack Langton & Jason Byrne restored the advantage to four points(1-23 to 1-19) before Paul Cody crashed home his second goal in the 55th minute to leave just the minimum separating the sides, 1-23 to 2-19.

Eoin Cody pointed a free in the 57th minute to double the lead for Shamrocks but Clara finished strongest with points from Conor O'Shea, Jason Byrne & John Murphy with the winning score to snatch a dramatic victory that appeared most unlikely for the majority of the second half.

Eoin Cody had a chance with the last puck of the game to gain a share of the spoils but his attempt from a '65 went wide of the target.

Conor O'Shea opened the scoring with a point from play after just 15 seconds but Shamrocks took over & by the 11th minute they led 0-7 to 0-2 with points coming from Eoin Cody(0-3 0-1 free), Eoin Reid, Evan Shefflin, Darragh Corcoran & Liam Barron.

Clara replied with four consecutive points between the 13th & 15th minutes from Chris Bolger(2) & Jason Byrne(2 frees )to narrow the deficit to the minimum(0-7 to 0-6) but Shamrocks replied with points in succession from Ronan Corcoran, Adrian Mullen & Eoin Cody to push further clear in the 19th minute, 0-10 to 0-6.

However Shamrocks replied once more with points from Eoin Cody(2 frees) & Eoin Reid before Clara finished an absorbing half hour of hurling with consecutive points from Liam Ryan to trail 0-15 to 1-10 at half-time.

Further points at the start of the second half from Liam Ryan & a long distance free by Jason Byrne brought Clara level(1-12 to 0-15) but Shamrocks came roaring back & they outscored Clara 1-6 to 0-2 between the 33rd & 44th minutes.

The goal that came in the 33rd minute was a brilliant worked movement as a long puckout from Dean Mason found Eoin Cody in space & he stormed forward to pass to the onrunning Niall Shortall who finished expertly.

Cody added to his tally with four further points including two frees & a '65 while Ronan Corcoran was also on target adding a brace to his tally.

However Clara began the comeback from the jaws of defeat in which they displayed admirable strength of character & determination.

As mentioned Liam Ryan led the way, Matthew Kenny did an excellent man marking job on Adrian Mullen while goalkeeper Kevin Nolan produced heroics including a tremendous double save.

The hardworking David Langton, Conor O'Shea & the excellent free taking of Jason Byrne also came to the fore during that fightback.