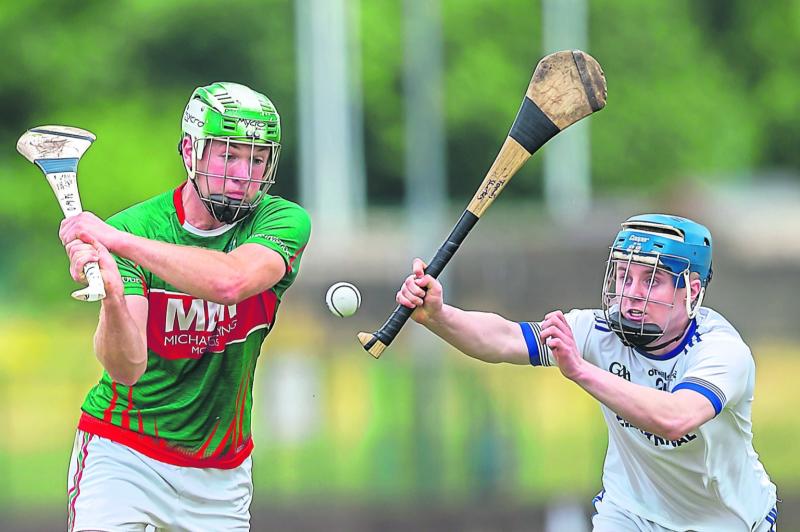 In a very enjoyable end to end contest, the recently relegated Rower Inistioge just had enough to claim the two points at St John’s Park on Sunday afternoon.

Johnstown led all the way through the first half, while a second half goal from Conor Tobin, which put the Fenians five points clear, appeared to set them on the way to victory.

However the Rower, led by Leahy, battled back to score 1-4 without reply in the final few minutes.

The Rower kicked off the scoring with a Kevin Murphy free in the second minute but a scoreless spell soon followed for Thomas Gleeson’s side as Johnstown got the next four points.

A pair of scores from Conor Tobin arrived before Mark Webster and Willie Brennan made it a three point game.

Webster and Murphy then swapped frees before Fenians again took command with Webster and Darragh Tobin getting on the board as they led 0-7 to 0-3.

It was from here that the Rower started a revival of sorts with Kevin Murphy grabbing a brace of points before Sean Bolger reduced the deficit to the minimum.

Webster had the final say of the half after his stoppage time free gave Fenians a two point lead at the break.

The midfielder then knocked over his third free to push the advantage out to three points at the beginning of the second period.

Webster’s accuracy from frees was proving a huge problem for the Rower and Fenians looked well placed when leading 0-10 to 0-7.

Both teams then succeeded in combining to hit a number of wides with the Rower in particular proving very wasteful in front of goal as they hit 16 wides in total.

It would have been a big regret had they not won the game, but they soon found their flow in hitting six points on the bounce.

Points from George Murphy, Eoin O’Brien and sub Jack Walsh levelled up matters before full-back Shane Ryan got forward to hit a pair of inspirational efforts.

Richie Leahy, who had been relatively quiet up to that point, then knocked over a fantastic point from the middle of the field after goalkeeper Paddy Lyng took a very inventive free to find the Kilkenny star in space.

Fenians hadn’t scored for 10 minutes at that stage but they weren’t going to go away quietly. They sprung Kieran Grehan from the bench, the replacement duly scoring three points in the space of five minutes.

Conor Tobin and Mark Webster also scored during that spell as they moved 0-15 to 0-13 ahead.

The Johnstown boys then looked primed for victory when Pa Duggan won a ball inside before offloading to the incoming Conor Tobin who blasted the sliotar into the net.

It felt like another point or two would have sealed Johnstown’s win but they failed to score again over the following 10 minutes.

The Rower took full advantage of this with quickfire points from George Murphy and David Kelly leaving just three between them.

The Rower got a big impact from their bench with sub David Kelly reducing the gap even further in the 56th minute.

Just a minute later and they were back in front when Tom Murphy found Leahy in acres of space and he raced towards goal before shooting past James Dermody in the Fenians goal.

David Kelly then converted a free to push the lead out to two points but even at that Johnstown still had a couple of late chances but the Rower defended well as they held on to secure the win on a 1-17 to 1-15 scoreline.