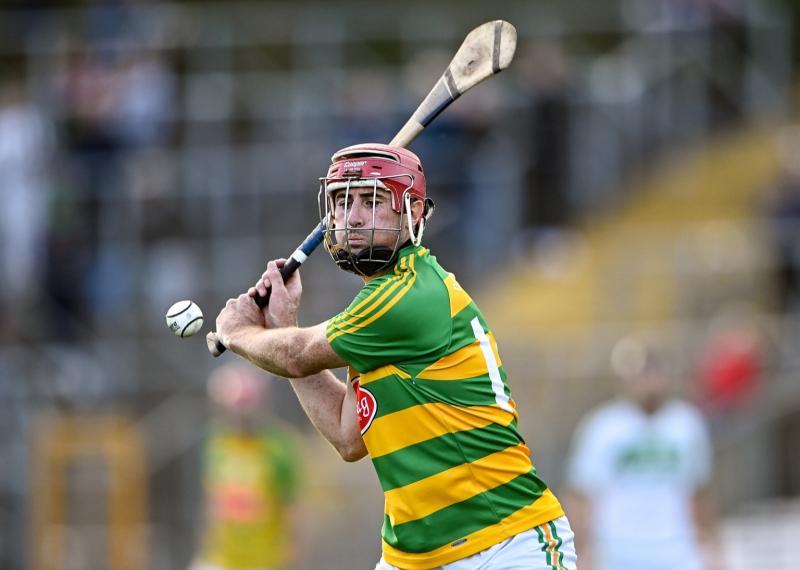 The free-taking accuracy of Nicky Cleere pinpointed Bennettsbridge towards a second consecutive victory against city opposition on a beautiful summers evening in Gowran last Friday night as their greater hunger, work rate and determination proved too good for last year’s county finalists.

Cleere led the way with a tally of 0-13 once again (0-11 frees 0-1’65) as he equalled his own individual tally from the win against Dicksboro the previous weekend while the defensive effort was very strong with Enda Morrissey giving a sterling display at full back.

Around the middle third area, they gained supremacy with Shane Byrne, Kilkenny star David Blanchfield, Kevin Blanchfield and Kevin Brennan along with the roving Ciaran Brennan epitomizing the strong work ethic throughout the Bennettsbridge team.

The O’Loughlins men started the brighter but they squandered numerous chances and throughout the opening quarter they shot seven wides. An Eoin O’Shea goal in the 5th minute gave them a 1-1 to 0-2 lead and after Liam Blanchfield replied with a point, Jack Nolan and Paddy Deegan added points in quick succession to stretch the advantage, 1-3 to 0-3.

Bennettsbridge started to gain supremacy and by the 21st minute they had drawn level(1-4 to 0-7) with Nicky Cleere (2 frees), Ciaran Brennanand Liam Blanchfield all finding the target.

They continued that dominance and outscored the O’Loughlins men 0-6 to 0-2 for the remainder of the half with Nicky Cleere adding four pointed frees while Hugh O’Neill and Kevin Blanchfield also found the range as Bennettsbridge led 0-13 to 1-6 at half-time.

Cleere added two further points from placed balls including a ‘65 as Bennettsbridge maintained their four point advantage by the 38th minute, 0-15 to 1-8

The bridge lads were in control throughout the second half in what overall was a disappointing contest, with often scrappy passages of play along with several frees reducing the quality on show. Bennettsbridge were reduced to 14 in the 47th minute following the dismissal of Liam Blanchfield but it in no way disrupted their flow thanks to their work-rate and ferocity.

Cleere kept the scoreboard ticking over with four further pointed frees from the 39th minute onwards while the lively Sean Morrissey added two great points from play in the 45th and 54th minutes.

Two of O’Loughlins best players Eoin O’Shea and Robbie Buckley(0-3 from play in second half) did their utmost to try and keep the scoreboard ticking over but despite their best attempts along with Paddy Deegan and Conor Heary, they never seriously threatened Bennettsbridge throughout the second half and they will be looking to bounce back against city neighbours Dicksboro on Saturday.

The victory for last year’s League Champions meant that they are the only team in the Senior League with a 100% winning record after two rounds of matches.