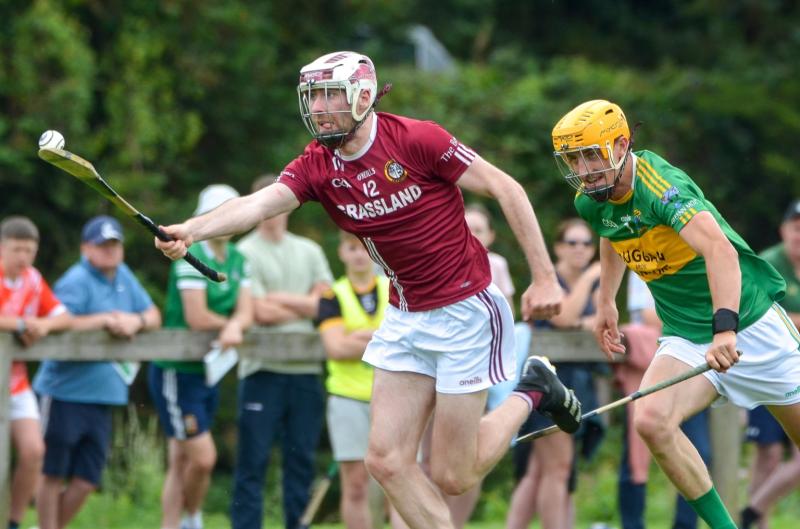 Dicksboro rebounded from their opening league defeat to Bennettsbridge as they swatted aside the challenge of senior newboys Glenmore in Inistioge on Saturday afternoon.

Andy Gaffney, Aidan Nolan and Bill Sheehan all netted goals in a dominat performance as Michael Walsh’s side cruised to an emphatic 21 point victory.

Mark Aylward stood out for Glenmore with three points from play but the 2021 Intermediate champions were well off the pace as the city side claimed their first league win.

Talisman Eoin Murphy had a difficult day at centre back for the defeated side and his day was summed up when he was sent off on two bookable offences near the end of the game.

The 'Boro raced out of the traps and were four points to the good within four minutes.

Thomas Kenny, Cillian Hackett and Aidan Nolan found their range and Glenmore could have been in even bigger bother after Nolan and Bill Sheehan combined to almost find Andy Gaffney but the corner forward was unable to get a touch on the ball when a goal looked on.

Glenmore then got their first point in the 5th minute when Mark Aylward got forward to score and the wing forward added on two further efforts over the next few minutes.

That left Glenmore within three points after Gaffney and Liam Moore opened their account for the Boro (0-6 to 0-3).

Gaffney with a free and Sheehan from play extended the Boro advantage before Sheehan then netted the opening goal of the game when he sprinted clear of a number of defenders before shooting past Mikey Kirwan.

Glenmore were very much rocking at this stage and while Alan Murphy did knock over a 12th minute free, they were unable to stem the rampant mood that Boro were in as the All-County league winners scored another 1-4 without reply.

Points from Gaffney and Thomas Kenny arrived before the second goal came along in the 16th minute when a poor Glenmore clearance from Sean Phelan was spilled by Eoin Murphy and Gaffney pounced to score the first of his two goals .

Cillian Hackett almost got a third goal when Kirwan produced a fine save and you worried for Glenmore at this stage.

Bob Aylward’s team refound themselves towards the end of the half as they themselves notched 1-4 on the spin.

Ger Aylward’s goal arrived on the cusp of stoppage time after Alan Murphy, Shane Murphy and Shane Doherty pointed to reduce the deficit to just seven points at the break.

Glenmore had built up a lot of momentum at that stage and they didn’t really want the half-time whistle to arrive when it did.

They did reduce the gap even further in the opening minute of the second half when Liam Hennessy pointed his opening score of the game.

That would be as close as Glenmore would get though as Dicksboro really piled on the pressure with Andy Gaffney’s second goal in the 32nd minute sealing the result as such.

The contest really suffered afterwards as the winners knocked over points for fun.

Cillian Buckley was excellent throughout for the winners and he too got on the scoresheet as his side went clear on a 3-14 to 1-9 scoreline.

Alan Murphy and Ian Byrne kept Glenmore ticking over but they proved to be their last scores of the game and in reality three second half points was never going to be enough to be able to compete with a side like the 'Boro who will have been delighted to get their campaign back on track.]

The city side scored 1-9 in the final 15 minutes as subs Conor Fitzpatrick, Chris Kavanagh and Aran Murphy all got in on the act before Aidan Nolan got their fourth goal late on.