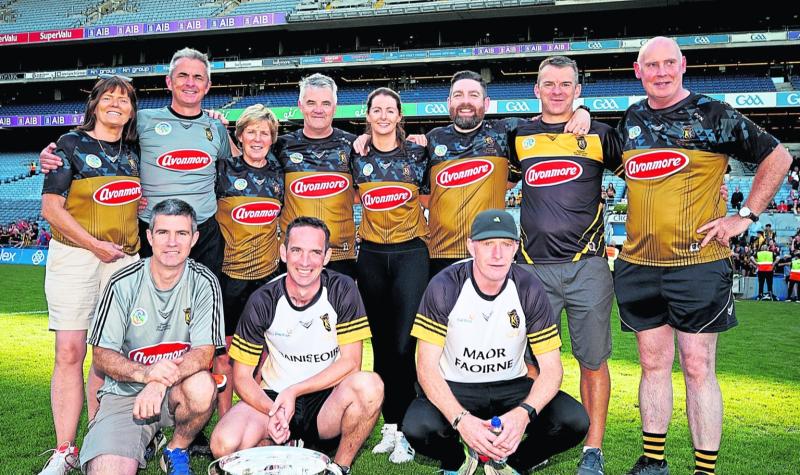 t’s been a very difficult year for Brian Dowling and his Kilkenny management team so it felt like there was a bit of justice done as they walked away from Croke Park on Sunday as All-Ireland champions.

Brian lost his uncle in a house fire earlier in the year and with selector Tommy Shefflin’s brother Paul also passing away, it’s been a trying time for the Kilkenny squad.

Add in retirements and injuries to the likes of Collette Dormer, Davina Tobin, Meighan Farrell, Aoife Doyle and Kellyann Doyle and it’s one hell of an achievement to see the Cats as the best in class at the end of term.

“It was tough, the off the field stuff was very tough,” said Dowling.

“A lot happened in March and April, obviously Tommy’s brother, Paul, passed away. Then my own uncle passed away in a house fire. Aoife (Prendergast)’s grandad passed away.

“Ciara Phelan’s grandad passed away and everything just happened in a couple of weeks and then to have Kellyann Doyle’s and Aoife Doyle’s cruciates on top of that.”

“It just seemed that everything was going wrong,” said Dowling.

“I don’t know, we just sort of galvanised some team spirit within the group and just a never say die attitude, stay going and stay going.

“I said it to the girls before the match, look….we said it on Friday night in the team meeting, look, the amount of things that were thrown at this group this year and here we are, still fighting, still in with a chance of winning an All-Ireland.

“I’m just so proud of them that they were able to get through all of that and whatever went on. We had new girls stepping up there today, the likes of Tiffanie Fitzgerald, went up and scored the first point of the game, she’s a corner-back, 19 years of age.

“That’s just incredible. That sums up the whole thing I suppose.”

Looking back on the game afterwards, the St Kieran’s College School teacher remarked that relief was the big feeling in the dressing room.

“I’m just so happy, just so relieved. Coming up the home stretch it looked like it was going to a replay but in fairness to these girls, they always find a way somehow.

“It’s not good for my heart but they got there in the end and we’re so happy to be All-Ireland champions.

“You have to believe, there’s no point in being out there if you don’t believe. I know the character that’s in these girls, we’ve been saying it all year, the girls are sick of me saying that we’re going to get a bit of luck somewhere along the way and we just have to be there to take it.

“We got it today and we know that. In the past maybe we didn’t but today we got the luck and Cork didn’t and that was the difference in the day.”

Katie Nolan won the player of the match after she scored five points in a dazzling display but possibly under the radar was the performance of Miriam Walsh.

The Tullaroan star scored three points from play and was a constant out ball and it was her who was fouled for Denise Gaule’s match winning free.

As well as Miriam, the Kilkenny boss also singled out the leadership of her cousin Grace, as well as the experienced heads of Denise Gaule and Claire Phelan who have all been on the wrong end of closely-fought finals with Cork over the years.

Dowling confirmed that Grace Walsh spoke to the group in the days leading up to the game and how much of an inspiration it was to them.

“We always want to keep Miriam close to the goal because she’s a goal threat all the time but we felt we had to bring her out.

“I actually said, ‘Look, she might win frees’ and that’s what she did.

“Miriam is in the form of her life this year. She’s been unbelievable, she’s been so consistent for us.

“But they don’t ever step back. If you heard Grace Walsh speaking in the dressing room the last couple of days it just puts the hairs standing on the back of your neck. It’s unbelievable.

“She couldn’t breathe coming in at half-time, she got a belt in her stomach.

“That girl just won’t back down from anything. I’ll just mention them all, there’s just so many characters there. Different ones stepped up at different times. That’s what it’s about.”