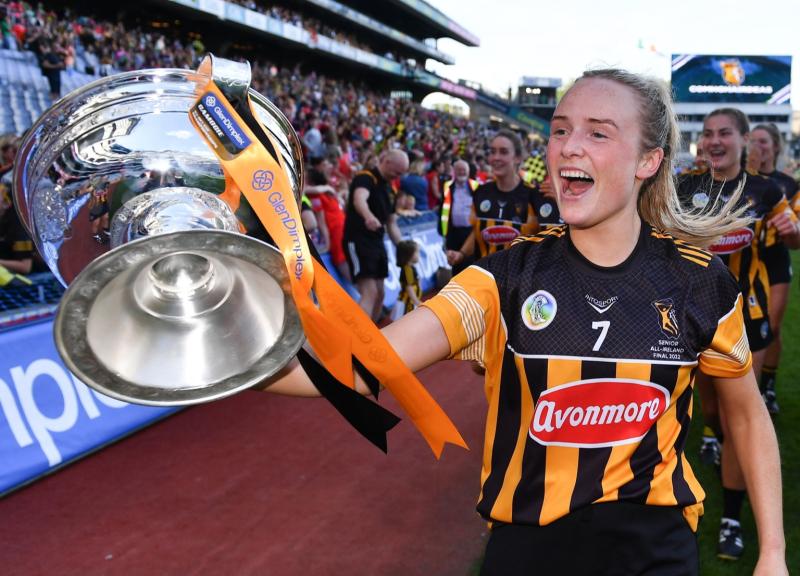 If anyone knows the patience that is required to succeed at the highest level, then it is O’Loughlin Gaels wing back Laura Murphy.

The talented defender was named to start in the 2020 All-Ireland final but she was replaced by the returning from injury Kellyann Doyle.

Fast forward the clock two years and it’s Murphy who has replaced Doyle after the Piltown star picked up another cruciate ligament injury.

So even when losing late on, Murphy knew they had to remain patient.

“It was just like Brian said, ‘Keep the faith’,” she said.

“We have been saying it all year, just keep the faith and if you go down two points, three points, whatever it is, we know that we have the capabilities to pull it back.”

“We always said we’re not a panel of 15 players, we’re a panel of all the players that come on and all the girls that are on the bench.

“And look at Sophie O’Dwyer there against Cork, coming on and getting that goal just when we needed it.”

Murphy has quickly became one of Brian Dowling’s go-to players.

When he needed to mix things up on final day, he handed her the No 7 shirt again but slotted her in at midfield for different stages and like she did when scoring a critical goal against Galway in the semi-final, she stood up to the mark.

Murphy is part of a squad that’s had it’s fair share of despair against Cork so to come out on the right side was satisfying.

Murphy added: “We’ve had a few tough defeats to Cork in particular. It’s heartbreaking when you put in all that work.

“I don’t think anyone outside of the group realises the work that goes into getting this far and actually getting over the line.

“To win by a single point . . . we’ve had a few close defeats by a point so it is that little bit sweeter when the margin is so tight because it could go either way.

“We’re just so grateful that we got that bit of luck.”

Murphy also paid tribute to the match winner Denise Gaule and the leadership she displayed in helping the Cats find a way to win.

Gaule has been on the end of her fair share of defeats so it was appropriate that she was celebrating on this occasion.

Murphy said of her team-mate: “All I can think of with her is hard work and oh my God, did she put that in? She was unbelievable.

“She might have missed a free or two but I think there was one stage over on the right-hand side when she got two or three blocks in a row.

“She just epitomises everything we believe in — hard work and that it’s never over until the final whistle goes. She was up and down the pitch all afternoon, she was brilliant really.”