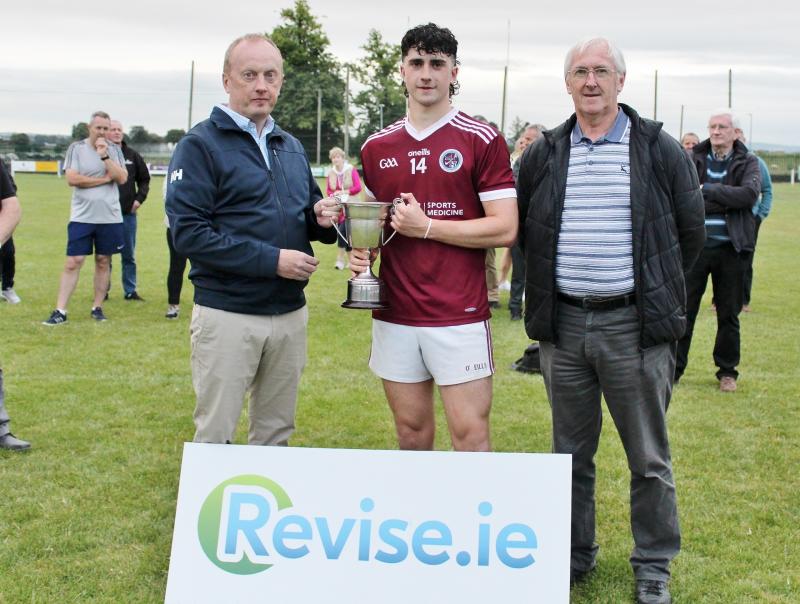 Dicksboro laid the foundations for this Revise.ie under-19 Roinn A County League Final win with a convincing first half showing against Galmoy/Windgap in Danesfort.

The city boys had built up a 10-point lead 2-11 to 0-7 by half-time and, although the combined forces staged a strong second half performance, the gap was always in evidence.

Adam O’Shea pointed from the throw-in following a Killian Enright pass, while Enright was responsible for their second point in the third minute.

In the interim, Nick Doheny had opened the ’Boro account from a free, with Zac McHardy following up, after a good pass from team captain Sean Maher.

Cillian Hackett and Andrew Brennan Smith, from distance, stretched the lead until Billy Power gathered a Sean Purcell delivery and made it 0-4 to 0-3 after seven minutes.

Sean Keenan had been very busy at wing-forward for the winners and he popped over before Doheny added a placed ball.
When Mick Carroll overcarried, Daniel Hanrahan punished his indiscretion, 0-6 to 0-4.

Dicksboro then struck a purple patch which gave them control. Points from Nick Doheny (free) and Sean Keenan made it double scores.

Cillian Hackett and Sean Keenan both spurned good goal chances for Dicksboro before the inevitable goal did actually arrive.

In the 19th minute, a long clearance out of defence by Stephen Darmody hopped in behind the Galmoy/Windgap defenders where Cillian Hackett reacted quickest and shot to the net.

Two minutes later, a good move by the Boro up the left wing ended with busy midfielder James Carroll batting to the net.

These two quickfire goals rattled Galmoy/Windgap and it looked as if Dicksboro were going to take over but they resumed composure and picked off a pair of points per Matt Delaney and Daniel Hanrahan.

The ’Boro finished strongly though, with a Sean Maher point and a pair of Nick Doheny frees to leave a 10-point differential at the break (2-11 to 0-7).

It was Dicksboro who set the early pace in the second half with points from Rory O’Connor, Nick Doheny and Kevin Moore .

Spurred on by Sean Purcell and David Sherman in defence, Galmoy/Windgap put in a storming second half effort.

Daniel Hanrahan started the fightback with a point from 75 metres following a David Sherman pass.

Substitutes James Purcell and Niall Drennan made an immediate impact with a point each, with Sean Purcell pointing a placed ball which he won himself on the left wing.

The strong running Callum Lonergan then weighed in with a point before he also won a free which James Purcell pointed.

Gearóid Phelan was now catching some good ball on the Galmoy/Windgap half back line and he set up Daniel Hanrahan for a another long range point to cut the deficit to six points (2-14 to 0-14) by the 45th minute.

Dicksboro, however steadied their ship and picked off a few late points, six in total, from five different players as their defence tightened up considerably for the final quarter.