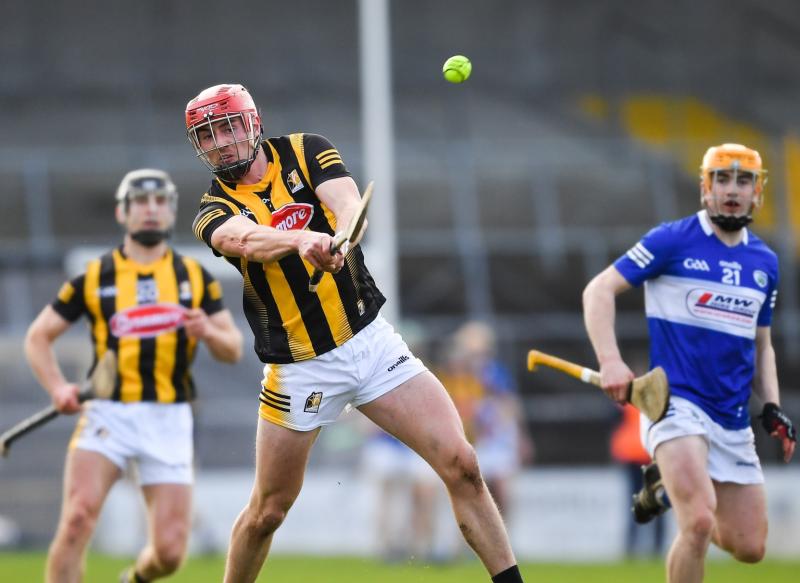 A thundering tie in which the sides couldn’t be split played out in Palmerstown when the Rower-Inistioge and St Lachtain’s collided in the second round of the intermediate league on Saturday evening.

Rower-Inistioge opened brightly and when Jack Walsh collected a long ball in the right corner-forward position he made no mistake firing to the net in the third minute.

With only four minutes on the clock, Rower-Inistioge had registered their second goal when Tom Murphy found Jim Ryan in space behind the defence. He gave Jordan Burke in the St Lachtain’s goal no chance. It was 2-1 to 0-0 after four minutes.

The Freshford men were reeling but James Maher (SL) settled the nerves when he reacted quickest to flick a loose ball in the square to the net, 2-1 to 1-0 after five minutes.

Kevin Murphy (R-I) fired over his second point from play before Cathal O’Leary (SL) landed a free from 70 yards into a stiff breeze.

Kevin Murphy (R-I) pointed a free before Cathal O’Leary picked out Patrick Killeen with a lovely pass and shot over the last score of the half to leave St Lachtain’s trailing on a scoreline of 2-8 to 1-5.

St Lachtain’s got the first score of the second half through the metronomic free-taking of Cathal O’Leary.

Jack Walsh fielded a great high ball and laid off to George Murphy (R-I) who restored the Southerners’ six-point lead after 35 minutes (2-9 to 1-6).

Freshford landed the next two points through a Cathal O’Leary free and James Maher pointed a beauty from 45 yards tight to the sideline, 2-9 to 1-8.

After Freshford missed a goal chance, It looked to be a pivotal moment in the game as Jim Murphy popped up from wing back and fired over a point from 70 yards to extend the Rower lead to six (2-11 to 1-8).

Cathal O’Leary (SL) sent over another unerring free from 50 yards before O’Leary (SL) made the most of a resulting 65 to leave Freshford trailing by four.

Jim Ryan caught a long clearance before pointing from 40 yards to extend the Rower lead.

However, just when the Rower looked like they might pull away, Darren Brennan collected a ball and found space along the end line to fire an unstoppable shot to the far top corner to make it 2-14 to 2-12 after 49 minutes.

Cathal O’Leary got St Lachtain’s back on level terms when he fired over a free from 47 yards. He quickly followed that with a huge point from 80 yards to make it 2-14 apiece after 56 minutes.

A long clearance from Joe Lyng was gathered by Jim Ryan and he raced clear to finish to the top corner of the net from 14 yards to nudge Rower back into a three point lead in the 58th minute.

However, the Rower Inistioge faithful were still celebrating when James Maher gathered the puck out and raced clear before finishing to the net. It was now 3-14 apiece!

And worse was to follow for the Rower-Inistioge men when substitute Ruaidhri Delaney was shown a straight red for a loose pull on James Maher in the build-up to the goal.

Cathal O’Leary edged St Lachtain’s into the lead for the first time in the game in the 59th minute when he pointed a free after the ball was picked off the ground, 3-14 to 3-15.

When Jack Hickey found James Maher who stretched the lead to two in stoppage time, St Lachtain’s looked to have secured the points.

However, we got a finish befitting of the game itself.

Tom Murphy won a ball in the centre forward position and, despite being grounded with a great shoulder from Criomhthann Bergin, he managed to pick out a pass to Pat Lyng who had ghosted up from left half-back. He fired low to the Freshford net to put the Rower Inistioge men one point up two minutes into stoppage time (4-14 to 3-16).

When St Lachtain’s won a difficult free 67 yards out, four minutes into stoppage time, no-one in the large crowd expected anything other than Cathal O’Leary to point. He duly obliged to leave the game ending in a draw.