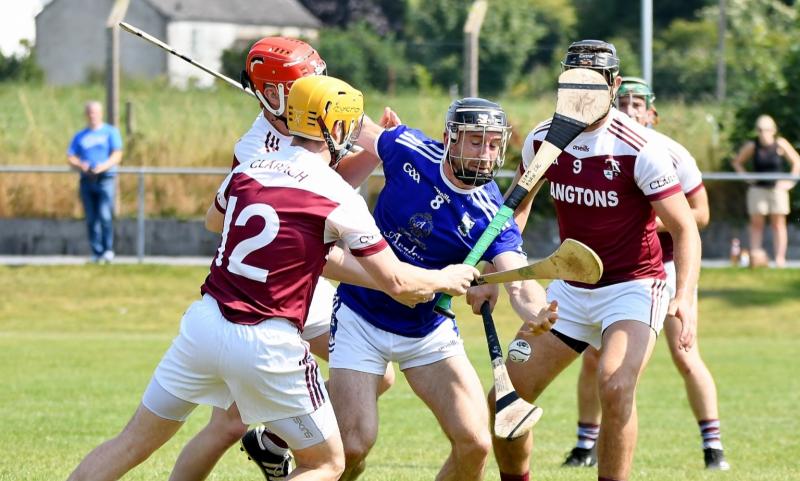 Clara were celebrating on the double over the weekend.

They were awarded a priceless league point from their previous week’s game against Tullaroan when the Kilkenny County Board upheld their appeal that the game had ended in a draw.

On Saturday afternoon at a sweltering hot Muckalee, Clara comfortably saw off the challenge of Erin’s Own with an highly impressive performance to secure another two league points.

Except for a brief period before the interval and sporadic occasions during the second half, the winners dominated this game, showing a superior work ethic to their opponents.

Wing back Shane Staunton, one of many players to impress for the winners edged his side ahead two minutes later from 60 metres.

Jason Byrne (free) and Conor O’Shea added further points as Erin’s Own struggled for scores at the other end of the pitch.

Jack Buggy grabbed a second point from a free on 12 minutes but his side had to wait 18 minutes for their next score.

When Ryan won possession and headed towards the Erin’s Own goal he was looking to lay the ball off to a colleague.

He continued to evade multiple defensive tackles before unleashing a well-struck shot into the Erin’s Own net.

Jason Byrne (free), Shane Staunton, Conor O’Shea and James Nolan added further points for Clara before Jack Buggy scored his and Erin’s Own third point on the 30 minute mark, their first from play.

A long distance free from Conor Delaney for Erin’s Own was followed by a goal for the Comer men when Jack Buggy tapped the ball home after the Clara defence failed to clear.

That goal brought the margin back to eight points, still a sizeable difference but that late scoring burst gave some hope to the Comer side as referee Sean Cleere blew the half-time whistle.

Erin’s Own continued where they left off after the interval with a brace of points from Jack Buggy (free) and Shane Feehan.

But that was as good as it got for Erin’s Own as Clara quickly reasserted their authority with points O’Shea and Bolger.

The game was put beyond the Erins Own reach six minutes later when Chris Bolger rounded his marker to score Clara’s second goal.

They scored a third on 55 minutes from Paul Cody.

Jack Buggy and Shane Feehan were the only Erin’s Own attackers to pose any problems for the winners defence in the second half with both popping over some neat points.

Just as in the first half, Erin’s Own finished the game well with four unanswered points but by that stage Clara had safely secured the two league points.

The winners fielded without injured duo Matt Kenny and John Murphy and they restructured their team to cope with the loss of their two half-backs. Martin O’Connell’s work rate altering between defence and attack was a big factor in the Clara victory.