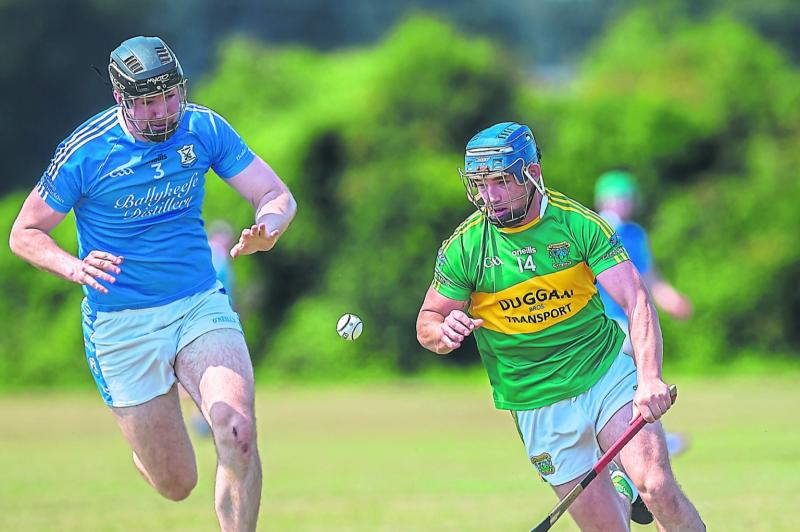 At around 31 degrees, it had to have been one of the hottest days ever for a hurling match to be played & credit to Glenmore & Graigue-Ballycallan for serving up an entertaining & enjoyable contest in the sweltering heat in Thomastown last Saturday afternoon.

The Murphy brothers, Alan 0-9(0-6 frees) Eoin & Shane were to the fore with Shane in particular having an excellent game as he scored three magnificent long range points from play, while All-Ireland U-20 winner with Kilkenny Ian Byrne bagged a brilliant brace of goals in the first-half as he displayed wonderful skill & composure on both occasions.

This victory meant that Glenmore got back to winning ways following a heavy defeat to Dicksboro the previous weekend in Round 2 & also made it two wins from their opening three matches.

The South Kilkenny men were totally dominant throughout the opening quarter & they led 1-6 to 0-1 by the midway point of the first-half with the goal a brilliant individual effort by Ian Byrne in the 9th minute.

Ger Aylward(2) was causing plenty of havoc at full forward while Alan Murphy(2 frees), Colm Roche & Liam Hennessy were also on the scoring sheet as points from Billy & Sean Ryan narrowed the deficit by the first water break, 1-6 to 0-3.

Sean Ryan reduced the margin further with a pointed free before Billy displayed superb skill to score a magnificent goal in the 18th minute.

That goal left them trailing by just two points(1-6 to 1-4) & Graigue-Ballycallan were now motoring.

However Glenmore responded with a purple patch of 1-2 without reply between the 18th & 23rd minute.

Shane Murphy added the first of his long range points followed by a free from his brother Alan before a short puck by Graigue-Ballycallan was capitalized by Glenmore & Ian Byrne raced through to finished superbly with an unstoppable shot from an acute angle, 2-8 to 1-4.

The Graigue-Ballycallan men fought back for the remainder of the half outscoring Glenmore 1-4 to 0-3 to trail 2-11 to 2-8 at half-time.

Billy & Sean Ryan were leading the way with Billy adding a second goal in the 25th minute while in the 29th minute he struck over a superb sideline effort.

Scores were at a bare minimum for the opening 10 minutes of the second half with just pointed frees from Sean Ryan & Alan Murphy adding to the respective tallies, 2-12 to 2-9.

Glenmore outscored their opponents 0-4 to 0-2 heading into the second water break as further points came from Alan Murphy(2 frees), Mark Aylward with a superb effort & Liam Hennessy, 2-16 to 2-11.

Conor Murphy thundered into the game in the final quarter & he added three points from play between the 47th & 50th minutes to narrow the gap(2-17 to 2-14), before Sean Ryan pointed a free in the 51st minute to reduce the arrears further, 2-17 to 2-15.

However Glenmore's greater overall quality in attack proved decisive particularly throughout that closing stretch with Alan Murphy adding three further points including two from play as they managed to close out the game.

A third straight defeat for Graigue-Ballycallan from their three matches but they will be pleased with the effort levels & commitment shown particularly after a very difficult start when they trailed by eight points.

They knuckled down to the task at hand & fought it out to the very end with Sean Ryan, Billy Ryan in the first-half, Conor Murphy & Conor Flynn - who in the second half managed to get to grips with Ger Aylward - doing their utmost.