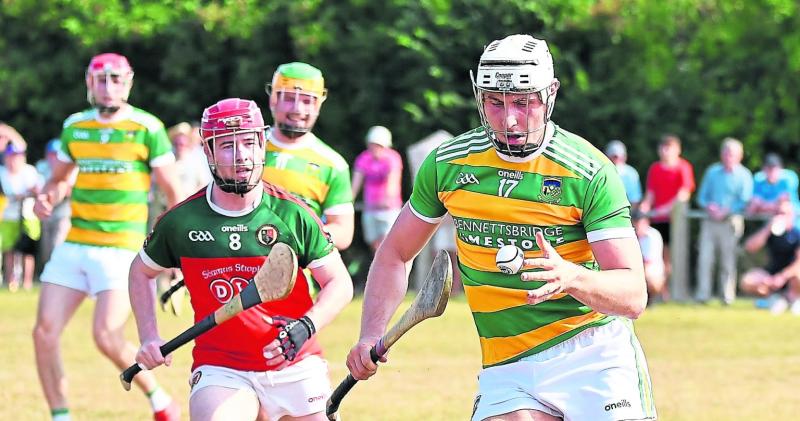 Bennettsbridge made it three wins from three in the senior hurling league as the defending league champions had seven points to spare over James Stephens on Saturday afternoon.

After beating Clara in last year’s league decider, the Bridge practically have one foot in the final again this year after notable wins against the city trio of Dicksboro, O’Loughlin Gaels and James Stephens.

The Willie Maher-coached side are very much the form team in Kilkenny at the minute and, helped by goals from Nicky Cleere and Hugh O’Neill as well as big performances from Sean Morrissey and Liam Blanchfield, they were always in control against the Village.

James Stephens, on the other hand, have a couple of problems to solve, most notably their stuttering attack. They only scored five points from play over the course of the hour, with Eoin Guilfoyle contributing 12 frees.

With games to come against Dicksboro and O’Loughlin’s, the city side will need a win or two if they are to avoid facing a relegation battle.

Guilfoyle knocked over an opening minute free for James Stephens but it proved to be the only time they led in the game after Hugh O’Neill goaled from the next attack for Bennettsbridge.

Sean Morrissey then made it 1-1 to 0-1 before Guilfoyle traded points with Nicky Cleere and Kevin Blanchfield.

Between the 11th and 13th minutes, Guilfoyle scored three points on the bounce to level up matters with the ace free-taker converting two placed balls as well as scoring a lovely flicked point from play.

The ’Bridge followed suit with three more points of their own as O’Neill, Cleere and Harry Murphy all found the target.

Luke Scanlon then became the first player outside of Eoin Guilfoyle to hit the target for the Village as the ’Bridge led 1-6 to 0-7 at the first water break.

Liam Blanchfield really came into his own after the stoppage; not only did he knock over two points from play but he also assisted the ’Bridge’s second goal when he found Ciaran Brennan who then laid off to Nicky Cleere and he made no mistake in shooting past Gavin Costigan.

Scanlon, Guilfoyle and William Spencer replied for the Village but with Nicky Cleere adding on the frees, the ’Bridge had a 2-10 to 0-11 advantage at half-time.

The second half was a duller affair than the first and Bennettsbridge always held their opponents at bay.

Kevin Blanchfield, Daniel Murphy and Nicky Cleere added to the winners’ tally with the Village getting scores from Guilfoyle and Cian Kenny.

Frustration got the better of the beaten side near the end after Tadhg O’Dwyer was sent off. Even though they also won a late penalty, their performance was summed up when Guilfoyle’s shot was well saved by Enda Cleere before the ’Bridge added on further insurance points from Morrissey and Cleere.