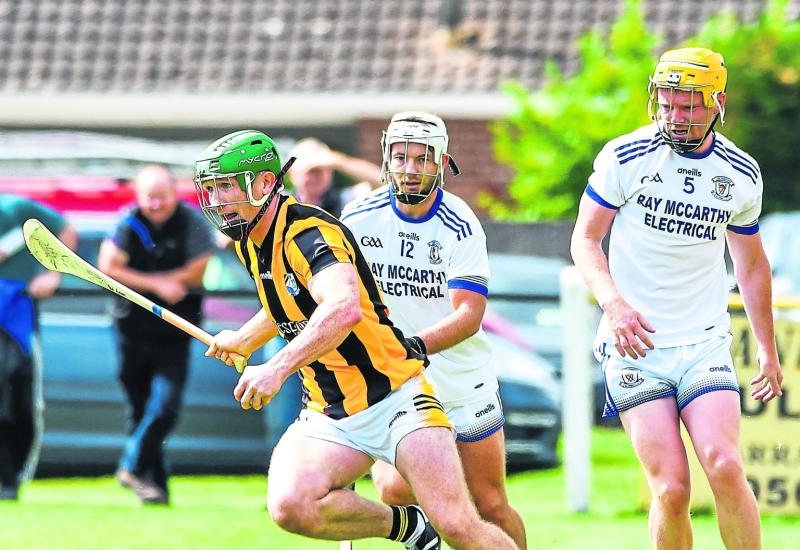 Paul Murphy (Danesfort) gets away from the double challenge of Fenians duo Willie and Sean Brennan. Pic: Billy Culleton

Danesfort made it three wins from three Group B games when they comfortably saw off the challenge of the Fenians (Johnstown) on Saturday.

The winners enjoyed the advantage of the stiff breeze in the opening half in Freshford, but struggled to make the expected impact on the game. It was the Fenians who played the better hurling in spite of being against the elements.

Fenians wing forward Willie Brennan slotted over the first score of the game on four minutes with Paddy Hickey levelling for the winners two minutes later.

Darragh and Conor Tobin, along with Mark Webster, were driving the Fenians forward at every opportunity in that opening quarter with Tobin edging his side ahead on five minutes. The margin would have been greater but for a brilliant Paddy Hogan save from a Fenians attack which started in their defence.

Richie Hogan started on the full-forward line for the winners, but with little ball heading in his direction it was no surprise to see him switched out the field in a roving role. And that move paid rich dividends for Danesfort.

Hogan landed a brace of points (one from a free) towards the end of the first quarter, but more importantly the Kilkenny senior star was now making a telling impact on the game. The winners were also enjoying a lot more possession, but some wayward shooting was not helping.

The Danesfort pressure eventually paid off when a searing run from James Mullally saw the wing-forward shoot low to the Fenians net for the game’s first goal. A point from Richie Hogan one minute later left the winners ahead by five points.

Rory Phelan and Mark Webster both pointed frees for the Johnstown side to keep them in touch. Jack Bruton was coming more into the game for Danesfort with every passing minutes and he pointed when set up by Richie Hogan.

Mark Webster’s free taking was keeping the Fenians in the game, but the Johnstown men had a let-off in first half injury-time when a Danesfort forward was fouled when he appeared to be through on goal. Richie Hogan pointed the resultant free to see his side leading 1-8 to 0-5 at the interval.

The winners dominated the second half although playing against the breeze. In many ways it suited them as the ball was better delivered into their attack. Richie Hogan continued to have a big influence on the game and so too did Jack Bruton until he departed with an injury.

Fenians continued their dependence on Mark Webster for scores and he landed five of their six second half points, all from placed balls. Padraig O’Grady scored the other point in injury time. The result was well decided by the time Robbie Walsh scored Danesfort’s second goal on 47 minutes.

After a sluggish start the winners comfortably controlled the game after the first quarter. The switch of Richie Hogan was key, while his former inter-county colleague Paul Murphy was outstanding in the second half. Jack Bruton’s work rate and pace was also key to the Danesfort win, with Diarmaid Phelan, Des Dunne and Paddy Hickey also to the fore for the winners. Goalie Paddy Hogan made a number of brilliant saves during the game.