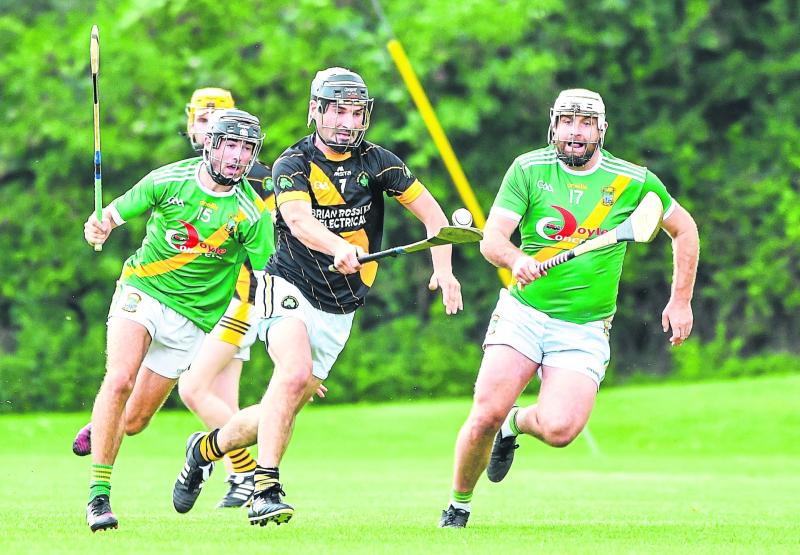 As they trooped off the pitch at Tom Ryall Park, the Conahy Shamrocks players must have had one question swimming about their heads: ‘How did we lose that one?’

Similarly, you wouldn’t have had to wonder too hard what question was going through the heads of the Carrickshock contingent: ‘How did we win that?’

Those were two posers many were left scratching their heads about as the ’Shock stole victory from the jaws of defeat on Saturday.

Seven points down (1-18 to 1-11) with little over five minutes of normal time left, the Southerners were left facing a mountainous task to overhaul a Conahy side who, although not boasting perfect accuracy, looked to have too much left in the tank.

What followed was the stuff of miracles, as the ’Shock plundered 2-3 in the most dramatic of fashions to swipe - no, steal - victory from under their rivals’ noses.

Eoghan O’Neill got the ball rolling when he ended a 14-minute barren spell for Carrickshock from a free, but that was only after Karl Downey had raced from his line to smother O’Neill’s first shot.

O’Neill would go on to add two more frees, but with normal time now up Carrickshock still trailed by five points (1-18 to 1-13).

Rather than go under, they raised their game to another level and got a break when Darragh Brennan rattled the Conahy net two minutes into injury time. Seizing on a booming Dan Blanchfield puck-out which caught the wind, Brennan ghosted in between two Shamrocks backs and squeezed a low drive to the far side of the Shamrocks net.

Conahy were rocked by that score and tried to clear their heads. They had a chance to go three ahead, but a point attempt sailed wide.

It proved to be a costly miss as, with the game in the fifth minute of stoppage time, Carrickshock pounced.

Supporters were heading for the exit when, with one last throw of the dice, John Power (Lismatigue) dropped a hopeful ball in towards the Conahy square at the scoreboard end. With the Shamrocks trying and failing to clear their lines, Shane Power swooped in to pull the loose sliotar home. Cue elation for one team, deflation for the other…

It was a nightmare finish for a Conahy side who didn’t have the best of starts either. The game was barely seconds old when Carrickshock roared ahead after Jamie Power crashed the sliotar to the net after Eoghan O’Neill skilfully broke John Power’s long ball into his path. Shamrocks were a little shaken by that strike and were thankful to Karl Downey for not conceding another soon after, the goalkeeper making the first of many fine saves to deny O’Neill from adding a second goal inside eight minutes.

Conahy struggled to find their rhythm in the early stages - they had nine wides inside the opening 20 minutes - but they maintained their composure to ensure they remained in contention.

Helped by the accuracy of Eddie Delaney (he got their first three points via frees) they began to get to grips with the game. Once Mark Gunner got their first score from play in the 17th minute they shook off that spate of wides and began to hurl with fluidity. With county panelist James Bergin adding two points they were level by the 22nd minute (0-6 to 1-3) and stayed there thanks to another Downey save, his point-blank stop denying Eoghan O’Neill again.

With Downey’s heroics inspiring his team-mates, confidence spread in the Shamrocks ranks. Sub Tom Rice gave them their first lead with a 27th minute point from an acute angle before Bergin cemented that advantage, profiting from Gunner’s good work to plunder a goal 60 seconds later (1-8 to 1-4).

The game was in full flow now, but still Carrickshock showed they had a real goal threat. Twice in a matter of seconds they threatened to have the green flag flying - first Ciaran Rice got back to hook Eoghan O’Neill’s lofted shot off the line, before Downey stayed big to stop Sean Grace’s effort.

With stoppages and injuries leading to several minutes of additional time, Shamrocks found another gear and surged into a commanding lead. James Bergin batted a point from close range before Eoin Cahill picked off the resulting puck-out and sent it back over the bar.

Even when Carrickshock threatened, it seemed to strengthen Conahy’s resolve. Downey made a fine stop to deny Darragh Brennan, then raced out to start a counter-attack that finished with Cahill adding another point. Although Eoghan O’Neill did convert a late free, at half-time the Shamrocks were brimming with confidence with a six-point lead to their name (1-12 to 1-6).

Sensing they needed a big performance Carrickshock were quick out of the blocks after the restart. With Eoghan O’Neill (0-3) leading the way they set about cutting the gap to three points by the 41st minute (1-13 to 1-10), but all of a sudden the scores dried up as Conahy went back on the offensive.

Karl Downey started the scoring run with a pointed free from his own half of the pitch, before Darren Cuddihy cut out a Carrickshock clearance and fired it back over the bar.

Working hard to shut their opponents down at every turn, Conahy continued to force the pace. Tom Rice and Mark Gunner were next to score, before Tom Phelan’s fine score from distance left them with an eight-point cushion (1-18 to 1-10) with eight minutes of normal time left.

A match-winning lead? Not as far as Carrickshock were concerned. One dramatic comeback later, the points were theirs.