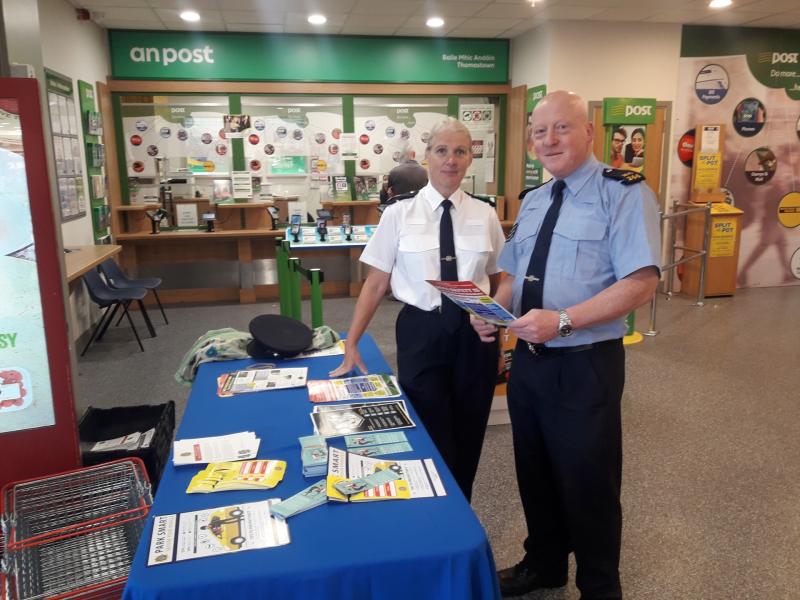 The Kilkenny Carlow Division of An Garda Síochána – together with An Post - launch a series of crime prevention initiatives to enhance the feeling of safety throughout communities across the counties of Kilkenny and Carlow.

Chief Superintendent, Dominic Hayes, along with An Post Head of Security Services Brendan Cloonan are announcing a number of crime prevention initiatives that will make people feel safer in their homes.

A new Text Alert scheme involving An Post’s network of local postal delivery staff forms an integral part of the new initiative being launched today. It is anticipated that this joint venture between An Garda Síochána and An Post will further demonstrate both organisations’ commitment to the rural communities of Kilkenny and Carlow. The text alert will be used to inform local postmen and postwomen of any suspicious or criminal activity in their postal area once it is reported to Gardaí. It will also advise on any other policing matters relevant to a particular area.

"Just over 100 Postmen and Postwomen in Kilkenny & Carlow have signed up to support this new text alert initiative,” said Chief Superintendent Dominic Hayes. "This is bound to have a very positive effect on disseminating advices and warnings in relation to crimes that have been reported to the Gardaí''.

It is an extension of the current Community text alert system which is running successfully in the Kilkenny Carlow division. Chief Superintendent Hayes sees Text Alert as a huge part of creating awareness among communities in relation to crime prevention. It is considered an important factor in reduction of crime in the division. Reported burglaries in the division have reduced by 65% from 2013 -2019, a period which coincides with the growth of Text Alert.

"Text Alert is a huge tool in creating awareness and warning of criminal and suspicious activity,” said Chief Superintendent Hayes. "There is no doubt that text alert has contributed significantly to the prevention and reduction of crime in our Garda Division of Kilkenny-Carlow.”

Another element of this initiative is the delivery by post of a cohesive crime prevention message to all homes across the division. The information will reinforce the ‘Keeping People Safe’ mission that forms the basis of this campaign.

The final part of this initiative will see crime prevention stands popping up in Post Offices throughout the two counties. These stands will be manned by Garda members who will distribute crime prevention advice to the general public while also increasing the visibility of Gardaí in the community.
Brendan Cloonan, An Post Head of Security Services said that An Post is pleased to be working with An Garda Síochána on this local initiative in counties Carlow and Kilkenny.''Working together we’ll do all we can everything possible to support our communities”.
The initiative is based on An Garda Síochána Policing Plan in which Commissioner Drew Harris outlined the mission of An Garda Síochána for the next three years; "It is as important as it is simple: ‘Keeping people safe.’ As guardians of the peace keeping people safe and safeguarding human rights is central to what we do. Keeping people safe will be the guiding principle upon which we will base strategic and operational decisions.”