National: 'It was like a tsunami' - Massive sinkhole opens up in Irish housing estate 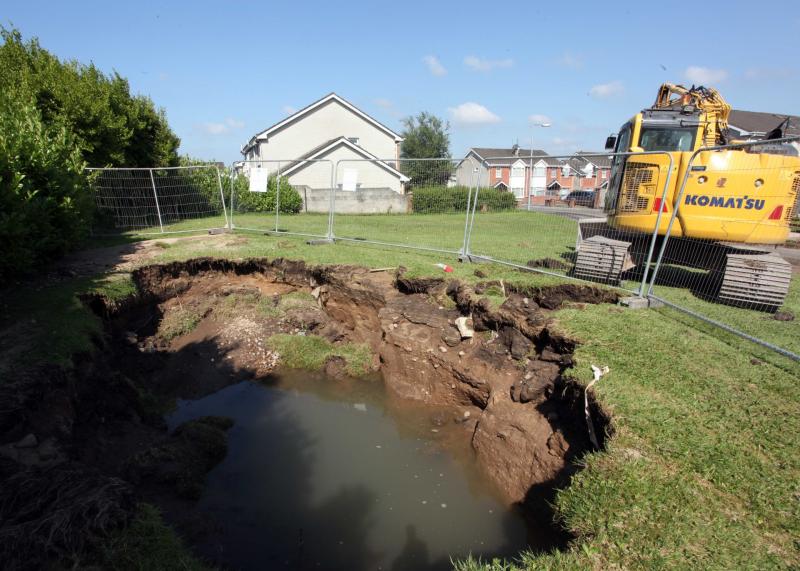 The huge sinkhole which opened up in Rhebogue Picture:Brendan Gleeson

A water pipe which ruptured at around 3am on Saturday morning is suspected to have led to the major collapse.

Local residents have described the “carnage” that unfolded in Rhebogue Meadows off Dublin Road in the early hours of the morning, likening it to “a tsunami” outside their front doors.

“The water came surging through the estate. It surged through houses, it actually turned direction due to the walls and broke some walls down. It’s just carnage,” explained Sarah Beasley, chairperson of Rhebogue District Residents Association.

“The sink hole is huge, it looks like the two incidents must be connected. I’d say the hole is nine foot deep. It just collapsed in. They have put barriers around it.

“There are houses ruined, cars are being taken away. The Daughters of Charity house is damaged. The residents were terrified. We were expecting this thunderstorm and that’s what we thought it was. The pipe burst in Rhebogue Meadows. They said it was like a tsunami at three o’clock this morning,” she continued.

“The smell is shocking. The smell is in the kitchens and bedrooms - these residents are of all ages. People are being told not to drive their cars because the electrics may have been ruined so there are cars being lifted and taken to garages for assessment.”

According to Ms Beasley of the Aontu party there are between 10 and 15 houses affected to different degrees. Three units of Limerick Fire Service spent two hours at the scene during the night. Personnel from Irish Water and the local authority also responded after the alarm was raised at around 3am.

“The fire brigade were there at 3am, the council officials are there. I have to say all the services who attended were amazing. There has been a fantastic response from everyone. All the residents are down there helping. I would say the residents affected will have to find alternative accommodation."

Local councillor Frankie Daly, NP, has called for proper investment to ensure a similar incident does not happen.

“There has been a significant break. This pipe has burst in the past and there have been issues there. It’s an asbestos pipe. It’s the same pipes that are breaking the whole time. They are not fit for purpose,” said Cllr Daly who is liaising with residents.

In a statement issued this Saturday lunchtime a spokesperson for Irish Water said: “Irish Water and Limerick City and County Council are working to repair a burst water main in Rhebogue serving Corbally, Moyross and surrounding areas. The burst water main in Rhebogue Meadows has caused water damage to a number of properties and a car in the estate.

“Irish Water and Limerick City and County Council Operations staff are currently on site and working with the affected families. Irish Water apologises to the residents for the distress caused by this unplanned burst.”

Impacted customers may experience lower than normal water pressure and in some instances, intermittent water outages.

“Crews are working to repair the burst as quickly and as safely as possible to restore normal water supply to homes and businesses in the affected areas. Works are expected to be completed by 10pm tonight. We recommend that you allow 2 to 3 hours after the estimated restoration time for your water supply to fully return,” continued the spokesperson.

Traffic management, including diversions, will be in place while the works are being carried out.

“In the meantime, it is important that people in surrounding areas continue to conserve water in order to reduce the pressure on local supplies which will be depleted as a result of this burst. Tips on conservation can be found at www.water.ie/conservation.

“Irish Water understands the inconvenience when a burst occurs and thanks customers for their patience while we work to repair the burst and restore normal supply to impacted customers. Our customer care helpline is open 24/7 on 1800 278 278 and customers can also contact us on Twitter @IWCare with any queries. For updates please see the water and supply services section of our website.

"Irish Water is working at this time, with our Local Authority partners, contractors and others to safeguard the health and well-being of both staff and the public and to ensure the continuity of critical drinking water and wastewater services. Irish Water would like to remind people to follow the HSE Covid-19 advice and ensure frequent handwashing."