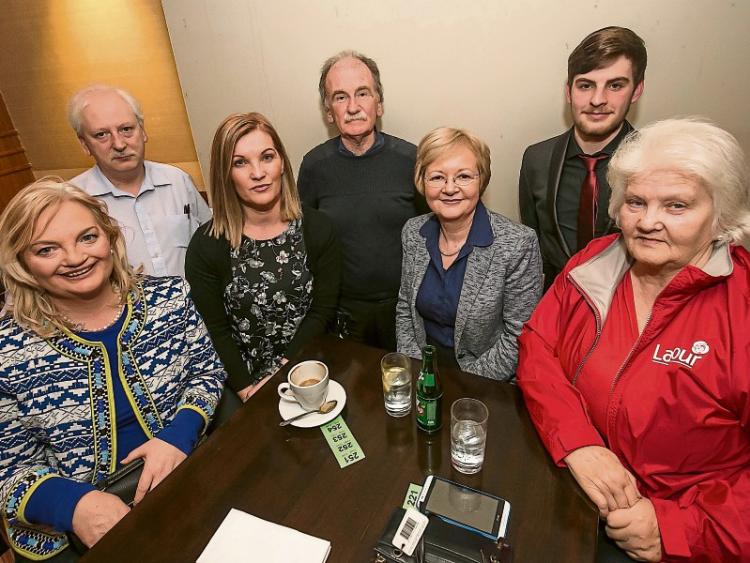 Although he was not present, the campaign launch for Labour party candidate in Carlow-Kilkenny for the upcoming general election, Minister for Rural Affairs, Ann Phelan, was dominated by former TD and Ceann Comhairle, Seamus Pattison.

It was the first launch he has missed for health reasons but all those present spoke of his impeccable political reputation and his great service to the people of Kilkenny.

“Seamus has been an incredible support to me ever since I entered politics in 2004,” Minister Phelan explained.

“ He has always played an influential role in my life, as he has in the life of a lot of people throughout this constituency. He is certainly one of the most honourable people to ever enter Daíl Eireann, who worked hard and tirelessly for this constituency.

“I have aimed to carry on that tradition and work ethic. I feel very honoured and privileged to have represented Carlow and Kilkenny for the last five years.

She claimed to have delivered more than any other Minister of State for the constituency in housing, education, elderly care and disabilities.

“I was delighted to have been in a position to make a positive difference in the lives of so many here for the last number of years and I am now respectfully asking the people of Carlow and Kilkenny to put their trust in my again and return me to Daíl Eireann for a second term,” she asked.

“A considerable amount has been done in the last number of years and our economy is on the cusp of recovery. But, it is delicate and we are at a very critical juncture, we cannot afford to risk our recovery. Now is not the time for change.

“It is going to be a tough fight but we are ready for the challenge. A lot has been done but there is more to do and my priority over the coming years is to ensure that each of our towns and villages here Kilkenny, feels that recovery.

She singled out her mother-in-law, Mrs Essie Phelan, who’s family, the Doherty’s, were the stalwarts of the Labour Party in Graig for generations and of course, my own Mam who unfortunately due to ill health couldn’t be with us here tonight.

“Mam has been my number of one supporter and even still, if she sees a tough interview or thinks I’m getting a “raw deal” in the media, her maternal instincts kick in, and she gets into protective mode,” she said.