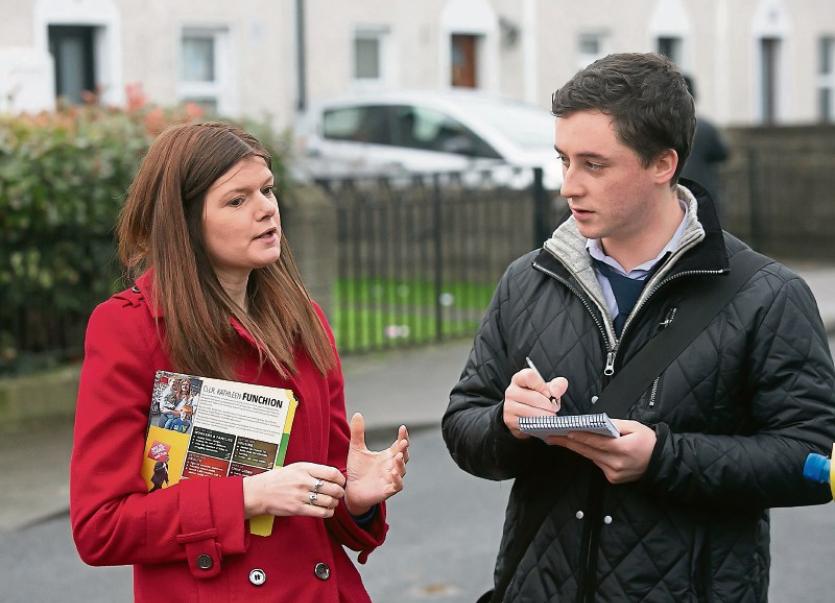 First elected to Kilkenny Borough Council in 2009, the Callan woman is seeking to become the first Sinn Fein TD here since WT Cosgrave in 1923. She has never had a better chance.

With her party poised to win its highest-ever number of Dail Eireann seats, the Kilkenny City West councillor knows she's in with a shot. She also knows it's probably now or never.

“I think it's the best chance we've had in the constituency,” she says, as myself and Pat Moore join her on a Friday afternoon. Along with Kathleen, an eight-person team is canvassing the Butts in Kilkenny City.

She is also happily joined by local resident Anthony Dawson Doyle. Not necessarily a dyed-in-the-wool Sinn Fein voter, he says himself and his friends support Kathleen more for herself rather than the national party.

“Also, with all the help Kathleen gave during the [Marriage Equality] Referendum, I wanted to return the support,” he says.

Naturally, Anthony knows everyone, but Cllr Funchion is on first name terms with people at virtually every door as well. She knows the area well.

At the first door, Sandra Hoban has some concerns over the TV3 debate the previous evening. She's worried about a 48% tax rate, but is reassured when Kathleen assures her it's for those earning over €100,000 only.

Housing is the big issue, no doubt about that. One young man we meet tells us of his long wait for a house – he is currently sleeping in his sister's house. He says the council have told him to go to the Good Shepherd.

Water charges are still a hot topic, too, says Kathleen, but some of the talk has changed in the last 10 months.

“Some of it is the same, but there are definitely two issues that are coming up a lot more now than they did in the by-election – disability and domicilary care,” she says.

“That, and a lack of things for young people to do.”

Her campaign is split, she says, 50-50 between Carlow and Kilkenny.

“We plan to open an office in both,” says Kathleen, who has taken unpaid leave from her job to focus her energies on the campaign.

Another door knocked on, another promise of a vote. The reaction has been generally positive, but things are always bound to get a bit nervy as polling day looms.

“It's really hard to call it,” she says.

“People can get very sentimental when they get into the ballot box – 'oh God, I was always Labour' or whatever. But we had two women in Piltown who are Fine Gael, and they said they were considering Sinn Fein this time around.”

That's the kind of thing the party will like to hear. Every vote counts on February 26.