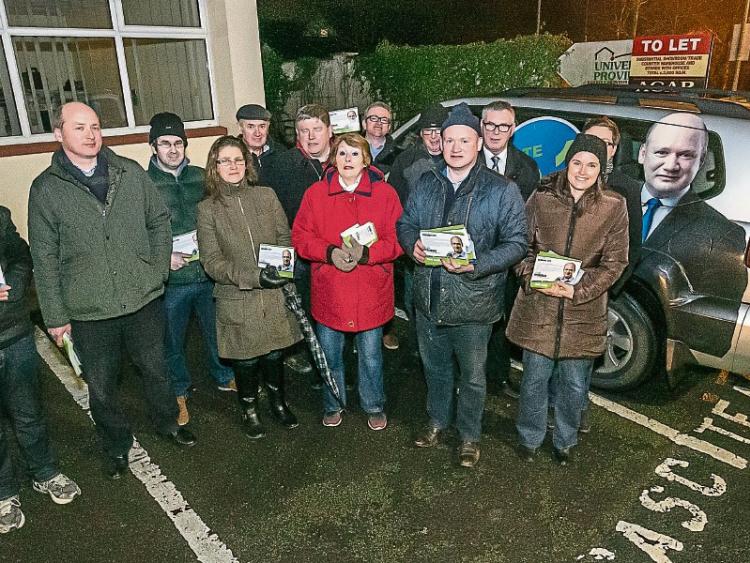 Going on the campaign trail with Fine Gael hopeful, David Fitzgerald on Friday night was something of a fitness workout .

With a long, quick stride, he left his canvassers in his wake as he walked from outside the Teagasc office on the Kells to The Paddocks housing estate. It was like an episode out of Operation Transformation.

He really is fired up for the contest and he was very impressive on the door step, listening first and then answering any questions or complaints.

It was mainly plain sailing and where the health service was mentioned, he acknowledged the inadequacies and highlighted the plans to address the shortfalls if Fine Gael is re-elected.

He had an impressive showing in the by-election last May, coming a close second to Bobby Aylward.

“That was the dress rehearsal, this is the real thing,” he said of the general election on Friday, February 26.

His key message was that city residents only had one TD in the whole of north Kilkenny, John McGuinness.

“We need more representation in the city and north of the county.

“At present people have only one person to fight for them in this area,” he said.

“If this is not addressed, you will have no one on the government benches who is going to be there to represent you,” he said.

He advised canvassers to say on the doorstep that the USC is to be abolished and that it is already being reduced.

“Explain that 75% of the Christmas bonus for social welfare recipients, was given back in the last Budget.

“We have created 135,000 jobs, spent €23 million on St Luke's Hospital and that there are now 500 troops stationed in the army barracks in the city.

“We have the Medieval Mile and a large number of new road projects in the city and in the north of the county,” he said.

“This Government has been incredibly good for Kilkenny. We want to make sure we have a Fine Gael TD here in the city to continue the fight for funding for Kilkenny. He is confident about his chances in the five seater.

“Reaction is very positive. Name recognition is stronger and people know me on a personal level and they have a sense of what I believe in and what I want to do for them.

“I have a desire to make things happen and to work hard,” he said.