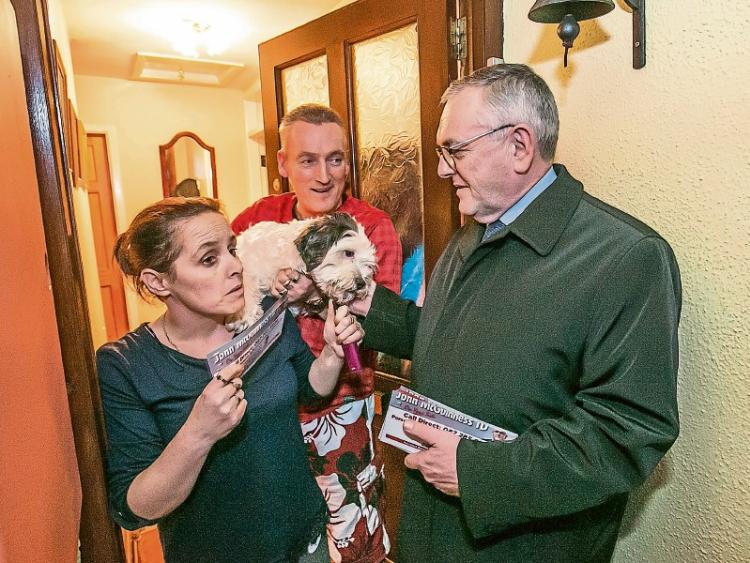 Canvassing with Fianna Fail's John McGuinness was like playing an important Gaelic football or hurling match.

The canvassers were like a team, receiving last minute instructions before going out on the field before facing the opposition.

Before hitting St John's parish, the supporters gathered in his O'Loughlin Road office where they got their instructions and the three canvas teams were announced.

They were ready for the fry. People like Mary Kealy, one of the stalwarts behind the Kilkenny Gospel Choir, who has canvassed for three generations of the McGuinness family.

Her devotion to the cause gives you a sense of how much people believe in the power of John McGuinness.

Mary's mother was an Egan from Threecastles and she was friendly with Deputy McGuinness's late mother, Ita, one of the Murphy family and a friendship-loyalty was born.

There is a good mix of youth and experience in the canvas teams led by members of the McGuinness family, with seasoned canvassers like Noel Deevy, Sean Breatnach and his wife Mary Ita, with a bit of glamour provided by Ann Marie Fitzpatrick (sister of Cllr Pat Fitzpatrick).

And after a heavy day In Dublin, John McGuinness goes door to door in the O'Loughlin Gaels area of the city, specifically, Newpark.

And even where there is a sign on the front door of a house which says “No Canvassers” he get's a real, warm welcome from Trish Kelly.

At the previous house, the woman at the front door thanks him for the attic insulation put in the by the local authority but wants the walls improved because they are damp and caused the wooden flooring to bend.

He takes a note of the house and when we get back to base he dictates a letter to the housing section of the council.

It's little wonder that John McGuinness is so good at his job, he pays attention to detail and at a house where the Polish woman explains she has no vote, even though she is there ten years, he organises for her to call to O'Louglin Road to get registered for the next general election.

Another supporter, Richard Grant from Mullinavat says he is behind John McGuinness since before 1997. Why? “Because I like him and believe in him and he gets things down for people and they know they can trust him,” he said.

Deputy McGuinness explained that the county gets canvassed every day from lunchtime onwards and surprisingly its the same reaction in rural areas as urban areas with the same problems surfacing.

He reacts to people who say his seat is safe by pointing out that no one has a God given right to a seat: “You have to earn it. Therefore every candidate starts out on an equal footing and has to gain their own vote.

“If you hear it being pedaled that I am safe, by the other side, stop them in their tracks,” he said.

The canvassers are told to highlight the inadequacy of the old age pension; the poor state of the health service and how the business people of the city and county have been reneged upon by the Government.

The third house we got to (the first two are empty), he gets a great response and even the pet dog, Casper takes a shine to him.

He highlights another huge issue as we walk along in the dark;

“People are afraid to open their doors at night because there is real fear and they keep their front doors locked. “Crime is a huge issue and again, the government isn't doing enough. We will if he back in Government,” he said.