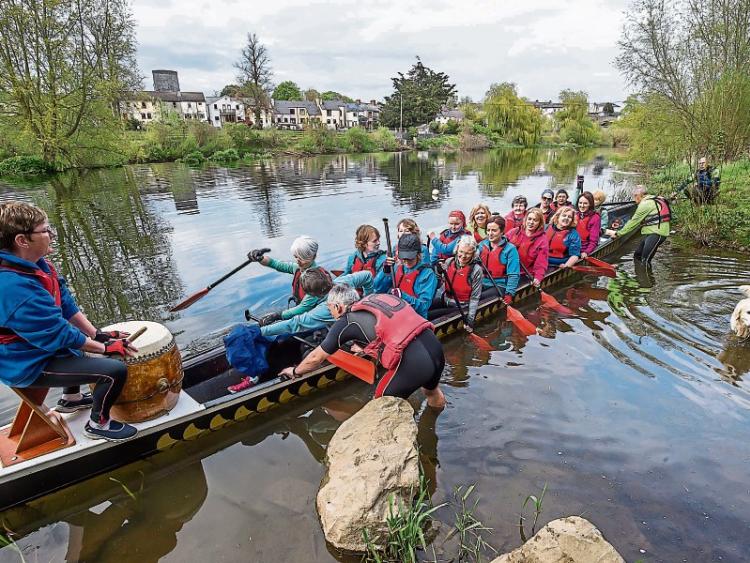 Paula Fleming, Mary Treacy, Anne Smart and Fiona Wallace have become part of a worldwide movement along with their mentor, specialist cancer physiotherapist, Joanne Brennan who has been central in the project.

They are Dragon Boat racers and have formed the Nore Dragon Paddlers and they are looking for other women to join them as they glide through the water, improving their physical health and also providing them with a sort of collective counselling which comes from going on the water and harnessing their strength for one purpose.

It all started when the four went to Clonmel in January to meet up with the Suir Dragon Paddlers after seeing a segment about them on RTE television's Nationwide with Mary Kennedy.

Paula and the rest of the Dragon Paddlers are indebted to Mr Jim Croke for selling them on the fabulous looking boat for a nominal fee and to Roger McClure and the members of Kilkenny Aqua Canoe Club for allowing them to store the equipment at their premises on the Canal Walk.

Paula explained that consultant surgeon Dr Tino Castineira came up with the idea of dragon boat racing when he saw how beneficial both physically and socially it is for breast cancer survivors.

Dragon boat paddling for breast cancer survivors came about following a study by Dr Don McKenzie, a sports medicine physician in Canada who wanted to see if repetitive upper body exercise in those treated for breast cancer caused a condition known as lymphoedema, a chronic swelling of the arm. An initial group was closely monitored as it followed a special exercise and dragon boat training programme and it was found that no new cases of lymphoedema occurred and no existing cases worsened.

If you would like to become part of this fantastic, inclusive movement just contact Paula at 0872363298 and she will be delighted to enlist you as a Dragon Paddler.