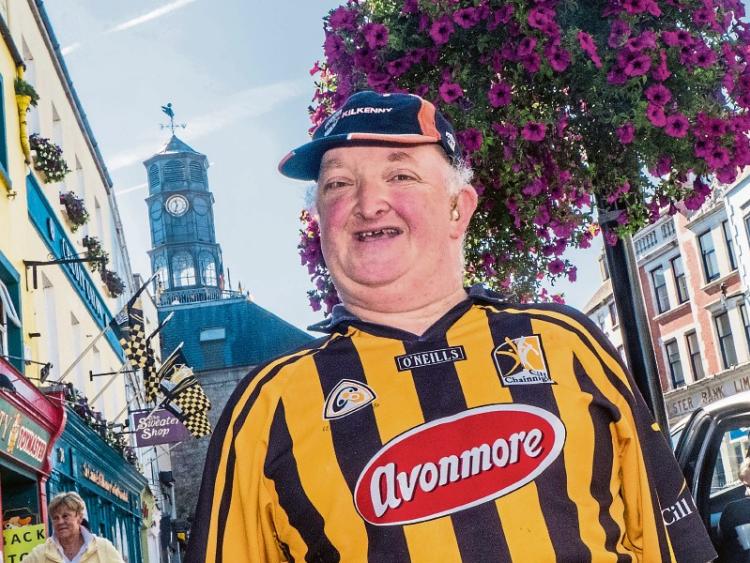 Jim Rowan, one of Kilkenny's proudest hurling fans, is eagerly awaiting this year's Titan clash between Kilkenny and Tipperary.

The 44-year-old has been going to matches since he was a youngster which is hardly surprising when one discovers he comes from strong hurling stock.

His father, Patrick hurled for Carrickshock and his brothers Niall, Martin, Padraig and Michael all played for their local club. His sisters Niamh and Mairead also played camogie while Mum, Maura and sister Eilis are avid supporters.

Jim is well known locally and has worked at the Super Valu supermarket in the Market Cross Shopping Centre for 21 years.

“I love the hurling - it is a bit of fun and there is a great atmosphere in the supermarket coming up to All-Ireland final time. The banter that goes on is unreal.I think it will be a tight match and that Kilkenny will win by a single point.”

Jim cites himself as 'one of Kilkenny's biggest fans' and adds that the best player that ever played for the Cats is undoubtedly Carrickshock man, Pat Dwyer. He also names Richie Power senior and junior as two hurling greats.

“I have been going to matches all my life. I am still trying to get a ticket but I am hopeful. If Kilkenny win or lose I will stay in Citiwest.

“We are in with a great chance - they have to win it for Michael Fennelly. I feel sorry for him - after all he has put in during the year and he ends up on the injury list and not playing,” he said.

Jim is also a massive fan of Brian Cody describing him as 'a great man'.

“ It is not an easy job for him and the selectors to pick a team. At the end of the day everyone has great respect for Brian Cody. Everyone wants a manager like Brian Cody. Kilkenny are in a league of their own.”