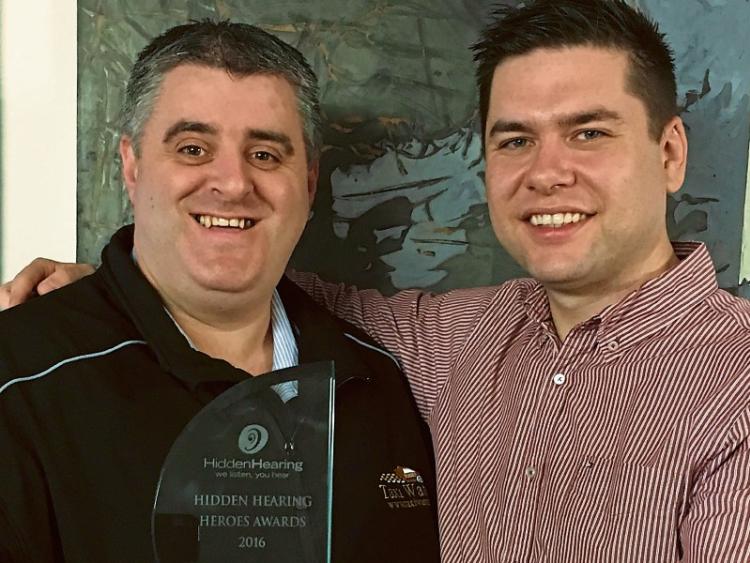 Local man Derek Devoy was recently presented with a ‘Hidden Hearing Heroe Award’ in Dublin on Monday following numerous nominations from local people. Derek is well known for establishing Taxi Watch Kilkenny, a group of taxi drivers who have been trained up to identify, communicate with and assist passengers that may be suicidal or suffering from depression.

Derek himself openly speaks about his battle with depression and actively campaigns for better services and a greater understanding of the issue.

Taxi Watch Kilkenny has already saved lives by helping people in distress that drivers have come across during their nightly routine.

The Hidden Hearing Heroes Awards were established in 2011 to honour those who have made a significant contribution to Irish society, their community, workplace, family or through sporting excellence. The awards ceremony took place in the DoubleTree by Hilton, Burlington

Road, Dublin, on Monday and was hosted RTE’s Mary Kennedy who gave great praise to Derek and his Taxi Watch initiative. Derek was nominated locally by Michelle Whelan and Cllr. Andrew McGuinness.

"Derek has been an inspiration. He has created something very special here in Kilkenny and as a result many people have been given the help that they need. I hope other counties will now follow Kilkennys lead.

Derek truly deserves this award and I'm sure it will encourage him to continue his great work," said Cllr. McGuinness.

Speaking at the ceremony, Derek thanked all those who nominated him and encouraged people to take care of one another.

"I'm absolutely delighted to receive the award not just for myself but for all the men and women of Taxiwatch.ie who volunteer there time to look out for others who may need help. It's great to get recognition for what we do. I hope we will continue to grow and that we can save many many more lives," said Derek.