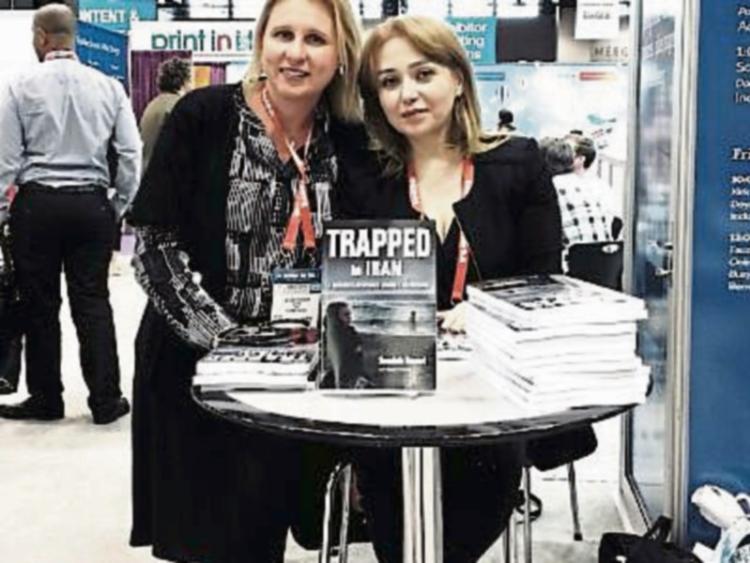 A Kilkenny-based writer has co-penned her first non-fiction book, Trapped in Iran.

This gripping book tells the story of Irish citizen, Samieh Hezari, who spent five years trying to get her young daughter out of Iran and back to her birthplace of Ireland.

Kaylene Petersen, who worked for over 20 years in editing and publishing in Sydney, London and Dublin, moved to Kilkenny in 2008 and worked with the Kilkenny People until 2010.

The Australian native returned to college and graduated with a BSc (Hons) Counselling & Psychotherapy earlier this year. She has recently set up a private practice on Patrick Street, Kilkenny, with two other counsellors.

Kaylene and Samieh first met in Dublin in 2005 at a charity ball. Together they wrote the book which was published earlier this year and has garnered positive reaction both at home and abroad.

“We ended up sitting next to each other and got talking. I had never met anyone from Iran and I found it fascinating to hear about her life, which was so different to mine. By the end of the night we had swapped numbers and had arranged to meet again for coffee. Samieh was warm and genuine, there was an instant bond there,” said Kaylene.

In 2009, Samieh, a mother-of-two, flew to her native Iran to introduce her younger daughter, Rojha (who was 14 months old at the time) to the child's father. The father then refused to allow Rojha to leave Iran, forcing Samieh to stay in Iran for five years until she managed to escape illegally with Rojha.

“During that period, Samieh would return to Ireland (without Rojha, whose father had taken her passport and alerted authorities she was not to leave unless he was with her making it impossible for her to leave) to see if the Government authorities could help her. I was always happy to see Samieh, but those visits were always tinged with sadness because I could see her pain that Rojha was not with her.”

As time passed the urgency to get Rojha out of Iran intensified as Rojha’s father would be entitled to sole custody once she reached the age of seven. The child’s father also placed a false allegation of adultery against Samieh - an offence that is punishable by stoning in Iran.

“I was very concerned about them both as time was running out. Then, in November 2014 I received a txt message from Samieh saying she and Rojha had made it across the border into Iraq and to pray for them and she would be in touch.

“A week later, I was standing at Dublin airport waiting for their flight to land. It was very surreal. I hadn't seen Rojha since she was a 14-month-old baby and now she was a six-year-old girl.”

In December 2014, Samieh decided to write her story to make people aware of what had happened. Together the friends managed to secure a publishing deal with Indiana University Press.

“Trapped in Iran was chosen as one of only three non-fiction titles to be presented on the author stages at Book Expo America in Chicago – the biggest book expo in America - which was held in May this year. It was very exciting and a great project to be involved in. I always knew Sami's story was extraordinary and would have wide appeal,” added Kaylene.

Trapped in Iran is available in Dubray Books in the Market Cross Shopping Centre and other book stores.