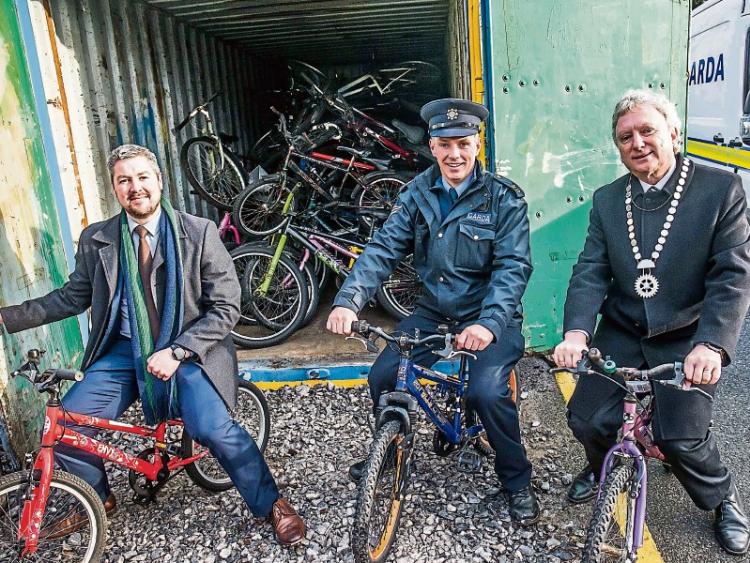 Sgt Paul Donohoe bring bikes to the Dunmore recycling centre for the ‘Bikes for Africa’ appeal and is pictured with Jimmy Connolly, President and Jason Dempsey, Rotary PICTURE: PAT MOORE

A campaign to bring the unused and unwanted bicycles of Kilkenny to Africa, where they can transform lives, is a huge success.

Just three weeks after the launch of the Kilkenny Rotary appeal more than 150 bikes have been donated.

The overwhelmingly positive response has delighted all those involved in the campaign as they prepare to start the process of shipping them to Africa.

“We are amazed, the public have really come forward,” Jason Dempsey of the local Rotary chapter told the Kilkenny People. “Three weeks in and the container is almost full!”

But don't let that deter you from donating the unused bikes in your house, especially if Santa Claus was nice enough to bring shiny new bikes this Christmas.

Members of the Irish Defence Forces in Kilkenny with Capt. Larry Scallan, have come on-board to help out and in January they will be transporting the first lot of bikes destined for Africa - meaning there will be lots more space in the container for bicycles.

The army transport will take the donated bikes to Loughan House Open Prison where the inmates refurbish the bikes before they are transported to Africa.

This project could not have taken off without the support of Kilkenny County Council; the staff of Dunmore Recycling Centre who are hosting the container; and the staff at CDS Architectural Metalwork who prepared the container.

Local gardaí have also come on board to help and just before Christmas Sgt Paul Donohoe arrive with a van-load of bicycles to add to the container.

These bicycles were unclaimed bicycles from the Carlow-Kilkenny garda district that had been held by the gardaí for a few years and were destined to be disposed of until they found this new home.

School Bikes for Africa aims to collect unwanted bikes in Kilkenny and forward them to people in Africa for who this simple mode of transport can transform their daily lives.

Children in Africa often have to travel 10km or more to get to school and back in a day. Walking in the extreme heat can be difficult, leaves the students tired and unable to perform to the best of their abilities.

For us in Ireland a bike is a fun thing, but in Africa it makes a huge difference to someone’s education.

In Africa owning a bike sees school attendance rise by 28%, and a massive 59% improvement in grades.

Entrepreneurs also avail of these bikes - they can carry five times more products than when walking and travel four times the distance.

“The opportunity is great, the impact immediate,” the launch of the scheme heard.

Healthcare workers are another group that receive the bikes and this allows them to get to more patients.

You can donate your bikes at Dunmore Recycling Centre.

The bikes must have a minimum 12” wheel, have mountain bike tyres only and must be sturdy bikes that can withstand rough terrain.