Brian Cody honoured for his ‘furtherance of a better world’ 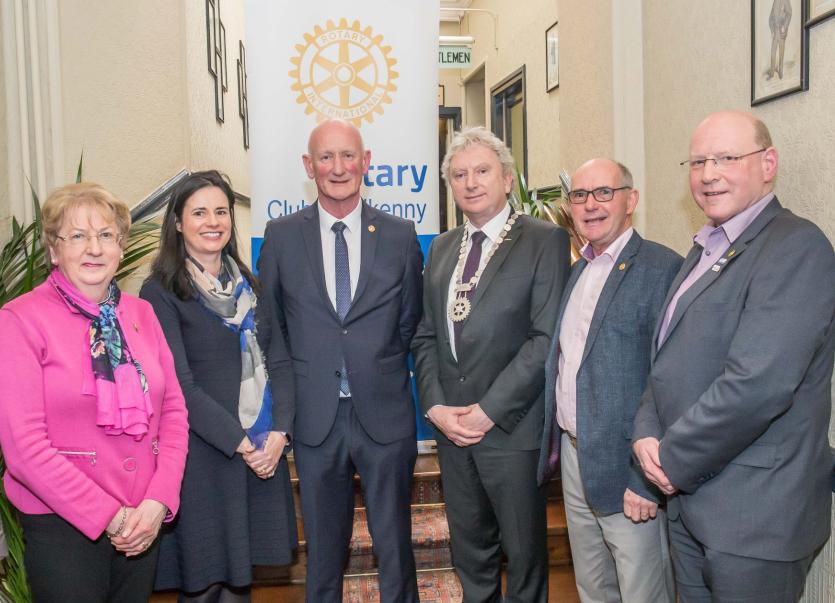 As part of the celebrations for the Kilkenny Rotary Club’s 40th anniversary, the members met this week to grant honorary membership of the club on Brian Cody, manager of the Kilkenny senior hurling team.

At the same time, the club awarded Brian the highest honour Rotary International has to bestow – the Paul Harris Fellowship.
Recipients of the Paul Harris award may not necessarily be Rotarians, but they are members of our community who have distinguished themselves by meritorious service and who by their example, embody Rotary’s ideals of high ethical standards, the advancement of understanding and goodwill, and service above self.

President Jimmy Connolly, in his address to the Club, said: “Regarded by many as the country’s greatest manager in the history of Gaelic games, Brian’s achievements are unsurpassed.

“Since becoming senior hurling manager in 1998, he has led Kilkenny through a period of unprecedented provincial and national dominance, winning 42 major honours. These include 11 All-Ireland Senior Hurling Championships, including a record-equaling four-in-a-row between 2006 and 2009, 15 Leinster Championships in 18 seasons, nine National Leagues, including five League and Championship doubles, and seven Walsh Cups.

“These two awards not only acknowledge this unique achievement, but aim to highlight how, through this legacy, Brian has made a hugely significant contribution to advance excellence in leadership, character building and improvement of health, while inspiring and promoting Gaelic games in Kilkenny and nationally.

“Brian’s leadership qualities were evident since his early days at St Kieran’s College, both on and off the field of play, in academia, and in leading college and county to success, at every level.

“His admirable ethos and vision have been inspirational both within and outside sport.”

President Jimmy read the two citations, and presented the accompanying Rotary pins to Brian Cody.
“Rotary International hereby name Brian Cody a Paul Harris Fellow, in appreciation of tangible and significant assistance given for the furtherance of a better world”.
“May it be known that Brian Cody is hereby proclaimed an honorary member of the Rotary Club of Kilkenny and is thus accorded the fellowship and privileges of such membership.”

Brian Cody, accepting both awards, said that he was indeed delighted to become a part of the Rotary movement, and that he had great respect for the work which is done, both locally and internationally, by its members.
He attended the Rotary National Conference in the Lyrath Estate Hotel last November as a keynote speaker, and was impressed by the breadth of influence of Rotary International.