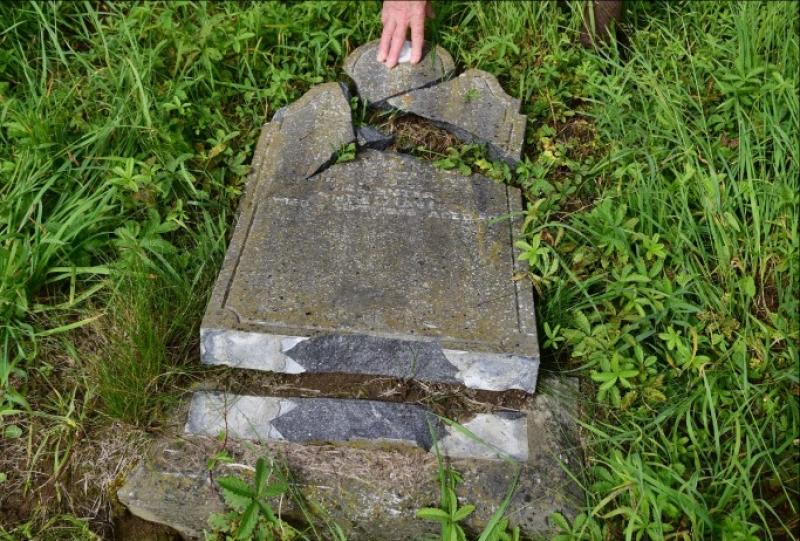 One of the broken headstones in St Mary's Abbey graveyard, Callan

There has been a call for CCTV to be installed at one of Kilkenny’s most historic sites after “significant and serious vandalism” has caused the front gates to be locked.

A number of gravestones were pushed over and smashed, more have been made unstable and could still fall over.
St Mary’s Abbey and graveyard in Callan was targeted in recent weeks, after Kilkenny County Council had arranged to open the gates to visitors, following many requests to open the site.

At last Friday’s meeting of Callan Thomastown Municipal District Committee councillors were told that has had to be discontinued.

The vandalism was described as “shocking and very disappointing” by County Council Director of Services Mary Mulholland, who gave the news to the meeting.

Ms Mulholland said seven gravestones had been pushed over and were left badly damaged and broken. Other gravestones are now unstable and could fall over.

The Director said the vandalism had surprised them but they had to take the decision to close the gates again, in the wake of the damage.

Ms Mulholland said visitors can still access the OPW historic site, in the centre of Callan town, by requesting the key to the gate. A notice has been put on the gate informing people where to do this.

The County Council will engage with the National Monuments Service, the Town Team and the gardai about future access, she said.

Families of those whose gravestones were damaged will also need to be contacted, if possible.
The graveyard will have to remain closed while repairs are carried out, to protect the dignity of those buried there, Ms Mulholland added.

In the Callan Town Improvement Plan, which was officially launched last week and presented to the area councillors at the same meeting, there are proposals for access and improvements to the St Mary’s Abbey site.

Cllr Matt Doran, who last year lead calls for the historic site to be permanently open to the public, described the vandalism as “hugely regrettable.”
He asked that CCTV be considered for the site now. “Surely the OPW can protect such a significant monument.”
Cllr Doran said this was unfortunate to happen at a time when visitor numbers were rising across OPW sites.

Cllr Joe Lyons said gravestones had been damaged in the church grounds a few times in the past. He said he thinks the damage was caused at night, not during the day.
Cllr Lyons suggested the people who open and close the town’s public toilets also be tasked with opening and closing the gates of St Mary's every day too.

The graveyard was opened at the start of this summer following many requests to make the graveyard more accessible. It is a national monument.