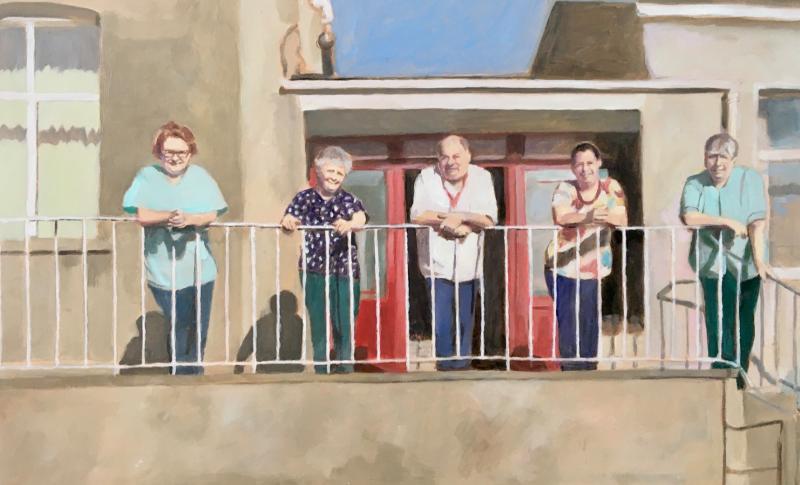 Staff at St. Columba’s Hospital in Thomastown, Co. Kilkenny are the subject of one of the latest pieces painted for and posted to social media as part of the #portraitsforHSEheroes series – which is a movement of Irish artists supporting health workers during the Covid 10 pandemic.

Sinéad Lucey’s painting also features as one of the creative pieces being shared online by the Thomastown Creative Arts Festival, following their postponement (in line with health and safety guidelines) of the actual 10 day event due in August. The festival was founded in 2009 to introduce the best of art, craft, music and film being produced in Thomastown and further afield to audiences that are local, national and international.

Born in Cork, 1968, Sinéad Lucey studied Law in UCC and History and Sociology in Trinity College Dublin before moving to Paris in 1991 – where she completed undergraduate studies in Fine Art (Painting) at the Ecole des Beaux-Arts de Paris. After living and working in Paris for 25 years, Sinéad moved to Co. Kilkenny in 2016. In January 2019, Sinéad received an MA in Fine Art from the Crawford College of Art and Design, Cork. Sinéad Lucey’s work, largely painting and drawing with some moving image, focuses on the human experience of space and movement, both real and represented. Sinéad has participated in numerous exhibitions in France and has taught Drawing and Painting in several 3rd level institutions.

Responding to their inclusion in the #portraitsforHSEheroes series and promotion by the Thomastown Creative Arts Festival, Director of Nursing at St. Columba’s Hospital Georgina Bassett said:

“Over decades, St. Columba’s Hospital has enjoyed an outstanding reputation as a residential care centre for older persons. The welfare of residents/patients in the hospital is a priority for staff and management. At a time when visiting has been restricted – and a challenging time for everyone – we are deeply appreciative of the support the facility receives from families and the wider community in Co. Kilkenny. This beautiful work by Sinéad Lucy and the context in which she and our friends in the Thomastown Creative Arts Festival are promoting it is a boost to everyone here in the determined efforts to stay safe and see our way through to better days ahead.”