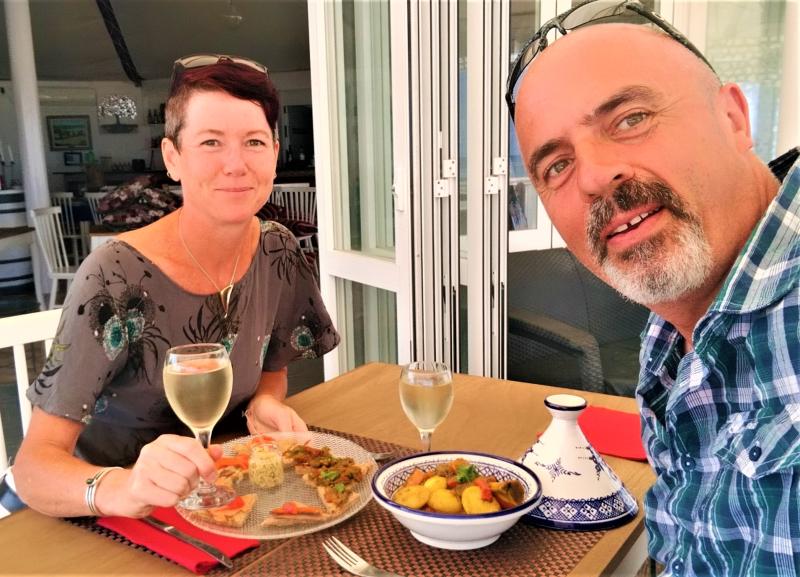 Cathy and Alan dining out

Two weeks ago we welcomed the second loosening of restrictions when we progressed from Phase Zero (Preparation) to Phase One (Initial).
There was utter confusion and frustration ahead of May 11 as details were leaked over the preceding weekend. These then had to be disseminated and translated into English for the sites online that we receive our information from.
I don’t trust my level of Spanish for official documents when the consequences of misinterpretation are huge fines. Areas within Spain have been divided into Health regions within the geographical regions so it all became extremely complicated.

In the end we deduced that we were allowed to travel in a vehicle together to visit in groups of up to 10 within our region. We jumped in the van and drove away from home first thing Monday morning. It meant so much to be allowed to visit friends again, like British-born Martin and his family, who Alan has known for the five years he has lived here. Messaging and scheduled video or phone-calls are a poor substitute for sitting around a table chatting over coffee.
CLOSE SHAVE WITH THE LAW
Afterwards Martin asked for a lift into town to collect his newly repaired car. We all donned our masks and drove the 10 kilometres. Just as we approached our destination we were stopped at a police checkpoint – the first any of us had encountered in the two months of this strict lockdown. As there was more than one person seated in the front of the van we were quizzed as to whether we were working. When we replied that we had been visiting friends we were asked what our relationship to each other was. Alan and I live together so it was fine that we were sharing the row of seats but we were breaking rules by sitting next to someone who didn’t live with us.
After a nerve-wrecking five minutes we were given a warning and told that we risked a €600 fine if we were caught again. We had a lucky escape and a valuable lesson was learned.
Once we had dropped Martin at the garage we visited a Serbian friend, Sasha, who is minding a fishing holiday camp instead of welcoming guests and organising trips on the Ebro river. Two fellow Serbs dropped in – they had arrived two months earlier for a fishing holiday and got stuck in lockdown.
The impromptu barbecue that ensued became their leaving party before the pair finally got to return home to another town in the same region. They were replaced by a Polish neighbour who was collecting Sasha for their first chance in two months to visit the local pub. Bars and restaurants are open to customers if they can offer outdoor seating at 50% capacity. Thankfully summer just arrived.
THE RAIN IN SPAIN
Every second week during spring was weirdly wintery – rain for a few hours a day and temperatures in the teens. But summer is here so, with temperatures now in the 30s we spend as much time as possible outdoors, planting herbs and vegetables, pruning trees or picking almonds. When work is done I love to take my book down the field and let the chickens roam free while I sit under a giant olive tree hen-sitting. They spend their time scratching for ants and giant worms, taking their daily dust bath and having a siesta under my reading chair.
Back home life returned to normal for the rest of that week, which means we spent the wet days on our computers planning for when we can return to any of our regular jobs of running an Airbnb and motorbike tours and setting up a European courier service.
We didn’t use any of our returned freedom until the Friday when a trip to town was required; I became dizzy with choice once again.
I was still searching for a novel in English but these rural towns don’t have any and the second hand shop, where I had hoped that expats dropped theirs into, was still closed for lockdown. I also wanted to buy a few other bits but the long queues are extremely off-putting.
A few weeks into lockdown I asked myself what was the first thing I would do when the restrictions were lifted. I soon realised that it wasn’t any of the big trips that I needed most, like the cancelled April family reunion back in Ireland or even a cultural outing to Barcelona or Tarragona. I just wanted to travel 40 minutes to the coast to enjoy lunch at one of our favourite cafés, Casablanca.
WORTH THE WAIT
And last Saturday, 10 weeks into lockdown, I got my wish. The Moroccan owner, Jamal, cooked his authentic dishes and, more importantly, sat and chatted with us and all of his customers whenever he could.
Jamal and his wife had just opened the taperia and bar in February, days before a major storm wrecked much of the coastline and flooded his new premises. The following weekend he reopened armed with his usual positivity: ‘Nobody got hurt so we must continue to enjoy life.’
A fortnight later, lockdown would close down the business for the next nine weeks. But last weekend he was the same upbeat Jamal: “We didn’t get sick, we can still talk and laugh and love so we are lucky to be here today to enjoy life.”
It’s no wonder that his place was full of new regulars, locals as well as expats from around the world. I told Jamal that, now that Casablanca was open once more, we could expect a plague of locusts. Our region enters Phase Two this week, and we will hopefully be out of lockdown by the end of June. But with weekly escapes such as this, I feel in no hurry to enter the New Normal.