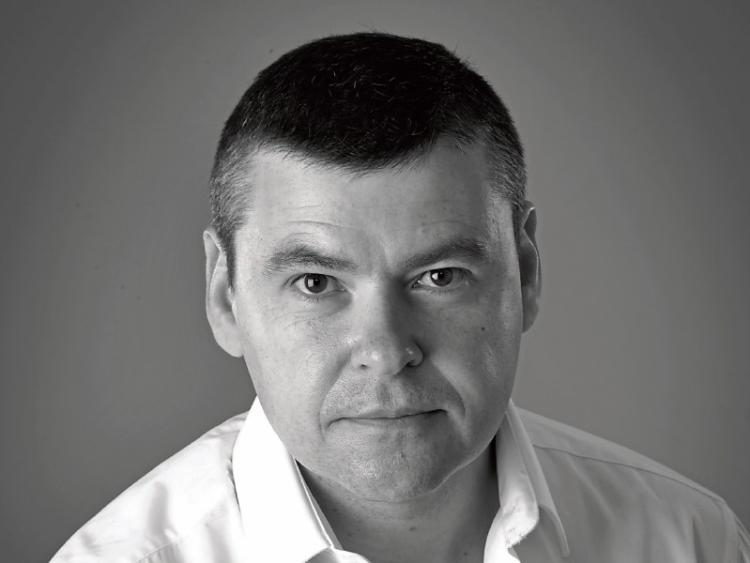 Darren Donohue is an award-winning Irish playwright and poet living in Goresbridge. His plays have been produced in Dublin, London, Edinburgh, Barcelona, Milan, Prague, Baltimore, Washington DC and New York.
Darren has written several plays and readings for the Abbey Theatre and for Theatre Festivals all around the world. He won the Bread and Roses Playwriting Award, 2019 and the Radius Playwriting Competition, 2020 in association with Finborough Theatre. This month he was awarded the prestigious Dennis O’Driscoll Literary Award, 2020.
His monologue ‘The Bird Trap’ won a seed commission with Popelei Theatre Company and was broadcast this month as part of their #WomenInLockdown project.
Darren is currently artist-in-residence with the Science Gallery, Trinity College supported by the Provost’s Academic Development Fund and developing a new play with Druid Theatre Company.
Originally from Kildare, Darren lives in Goresbridge with wife Margaret and daughter Emily. He is also the younger brother to one of RTE’s most loved broadcaster Brenda Donohue.
His plays are published by the Irish Theatre Institute, Stagescripts UK and New Island Drama. For the Kilkenny People this week, he will share his newest creation - a poem inspired by Black Lives Matter.

Darren, congratulations on your recent win of the Dennis O’Driscoll Literary Award. What does this mean to you on a professional and personal level?
I’m a long-time admirer of Dennis O’Driscoll’s poetry, so to receive an award named in his honour is very special. The award is primarily a bursary given to a writer by Kildare County Council. With regards to my writing, this bursary will support the development of new work.
With the arts at a standstill, 2020 has ironically been a prolific year for you so far.
We’re wading through uncertain waters and the theatre industry is currently paralysed by the pandemic.
My play, I and the Village - following the lives of three African women living in Direct Provision - was due to open in London this October. But like everything else in the industry, this production is postponed.
Right now, everyone in theatre is searching for new ways to tell their stories. I recently had a monologue titled, The Brid Trap, broadcast online by Popelei Theatre Company as part of their #WomenInLockdown project, it was interesting to see my script adapted for an online platform. Performed by the brilliant Julie Root, this piece is available to view online at popelei.com/commission
What else are you working on?
I’m currently enjoying a residency at the Science Gallery, Trinity College, supported by Provost’s Academic Development Fund. The Science Gallery matches people from the Arts with the Sciences. The play I’m researching explores how technology supports people with chronic illness.
Today, Alexa/Siri and talking Mabu robots provide one-to-one support while relaying information to doctors. The Mabu robot, with its small yellow body and friendly expression, serves, literally, as the face of the care management.
The software incorporates expertise in psychology, artificial intelligence, and medical treatment plans to help patients manage their chronic conditions. The result is a sophisticated robot companion that uses daily conversations to give patients tips, medication reminders, and information on their condition while relaying relevant data to care providers.
With the aid of specialists in the fields of robotics and AI (Artificial Intelligence) at Trinity, I’m investigating these innovations to create a new play that shines a light on this area. I’m also currently developing plays with Druid and the Finborough Theatre in London.
Are you mining any personal experience for the play you are developing with the Science Gallery?
In 2010, I was diagnosed with Crohn’s disease. Since then, there are periods where I’m forced to work from home. The play I’m developing with the Science Gallery will look at the positive and negative effects of this enforced isolation, and the role AI and the internet plays in the lives of people in a similar position.
What other issues grab you as themes for your plays?
I’m drawn to themes of citizenship, spirituality, identity and forgiveness. Ireland has a rich history of immigration plays but I’m interested in people who are arriving from around the world to settle here. My latest play trilogy explores the challenges and possible conflicts which arise when different cultures meet.
Cultures and borders mixing are definitely hot topics at the moment.
Brexit highlights how the freedom of movement across borders is now one of the biggest challenges facing societies. How we successfully integrate one culture into another is something the western world is struggling to understand. How do we promote inclusion and value difference, while making sure every voice is heard and no one is feeling left behind? These are the kinds of questions the theatre is well equipped to explore.
Your poetry is widely published and you were nominated for a Hennessy Literary Award on four occasions and recently, as well as being shortlisted for the Strokestown International Poetry Prize. I am looking forward to hearing your newest poem inspired by the Black Lives Matter movement.

Woke
It was as though I woke up inside a riot – smoke, gunshots, screams. I couldn’t see the sky or tell if it was night or day.
*
It was as though we were swept off our feet by outrage and blown down frantic streets. Missiles flew trailing sequins like destroying stars and, for an instant, our darkness gleamed.
*
It was as though the city trembled, afraid to know itself. Artificial lakes forgot their purpose, tower blocks threw down their shadows, surprised statues buckled at the knee or clung to their marble plinths.
*
It was as though we were the sickness and the cure, a purging righteousness slicing through brick, glass and steel to find the city’s naked heart. It was as though time crumbled while circling its walls, waiting for the killing to stop.

That is incredible Darren, thank you for sharing it with our readers.
What advice do you have for anyone with writer’s block?
The first thing to remember is that all writers suffer from it at some point. And essentially, writer’s block is the time you take to find your subject matter, an idea that will inspire you to pick up your pen or flip open your laptop and Begin (with a capital B).
To find your subject matter, an idea that will sustain you through the writing of a play or novel, you must be patient. The artist and film director David Lynch describes it as being like fishing, waiting for the big fish to come along and swallow the hook. But, while you wait, you must keep your creativity alive by reading, writing poetry or short stories or jotting down ideas, so when the big fish swims over and takes the hook, you’re ready to reel it in.
Darren’s plays and readings for the Abbey Theatre include Home Game, The Barkhausen Effect, Home-from-Home. Other plays include, Dayshift (Tramedautore Theatre Festival – Milan, Festival on the Crisis PIIGS - Barcelona), Voices in the Rubble (Rapid Lemon Productions, Baltimore), Tuesday Evening (following the news) (Fishamble), A Bucket Full of Fire (Sheer Tantrum/Pandora), The Bird Trap (Three Streets Theatre Company), Keep the Home Fires Burning (Comedians Theatre Company) Revelations, Propelled Upright (Dublin Fringe Festival) Waitin 4 Johno (Crooked House), Bedlam (Dublin Theatre Festival). Dual Cats with One Crayfish, Irish Repertory Theatre (NYC).
Darren’s poetry is widely published and he was nominated for a Hennessy Literary Award in 2012, 2014, 2016, and 2020. He was also shortlisted for the Strokestown International Poetry Prize, 2020.