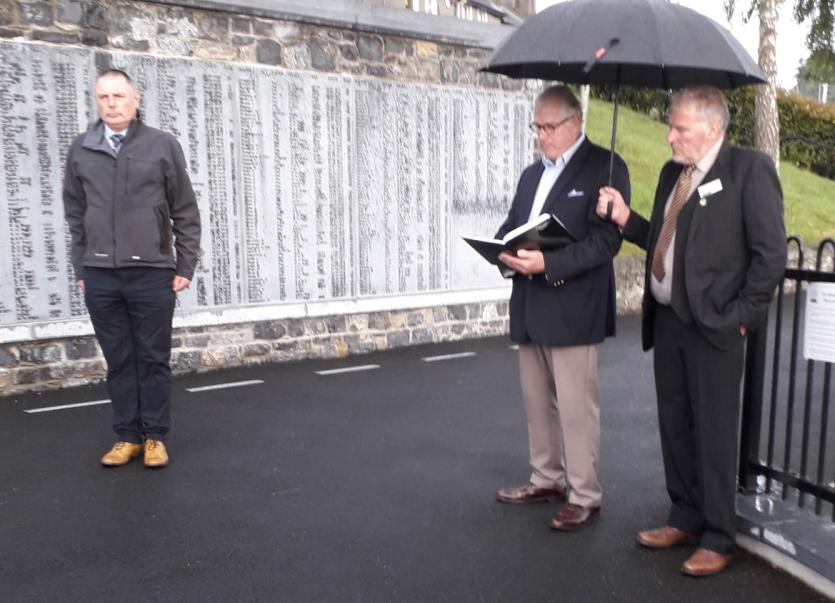 A small but poignant ceremony took place in the Peace Park Kilkenny    to remember the 126 Kilkenny men who died in the battle of the Somme from July 1 to November 18 November in 1916.
Captain Larry Scallan, Military historian and serving member of the Defense Forces based in James Stephens Barracks arranged the event with the Kilkenny Great War Memorial Committee.
Thanks to the support of Kilkenny County Council who placed the ceremonial flagpole in place ,the National Flag was flown for the day at the memorial as a mark of respect to those soldiers named on the memorial who died in the Somme battlefield.
Following a minutes silence the National flag was raised to full mast.
Mr Charlie Parsons on the bugle played the Last Post which reverberated over the River Nore and could be heard from all around the city.
Ironically as it was played the sound of thunder could be heard in the distant and resembling the sound of shells falling in the Somme. Mr Donal Croghan, chairman of the Kilkenny Great War Memorial Committee laid a large simple laurel wreath which was draped with a tricolour flag. Reville was then played by Charlie Parsons followed by the poem To My Daughter Betty, The Gift of God by T.M.Kettle War poet 1880 1916 read by Mr John Joe Cullen. Tom Kettle like a lot of the other Kilkenny men who died in the battle of the Somme are remembered on the Thiepval Memorial, Authuille, France.
The ceremony finished with Captain Scallan telling the socially distanced group of the great number of men who died on the Somme with seven Kilkenny men dying on the first day July 1.
One of those men was 13084 Private Luke Coughlin who served in the Machine Gun Corps, he left a wife called Kate and three children James, Mary and Margaret. Luke's army pension was paid until his youngest child reached 16 years old in 1930.
Seventy two Kilkenny men of the battle of the Somme have no known grave and are commemorated on the Thiepval Memorial.