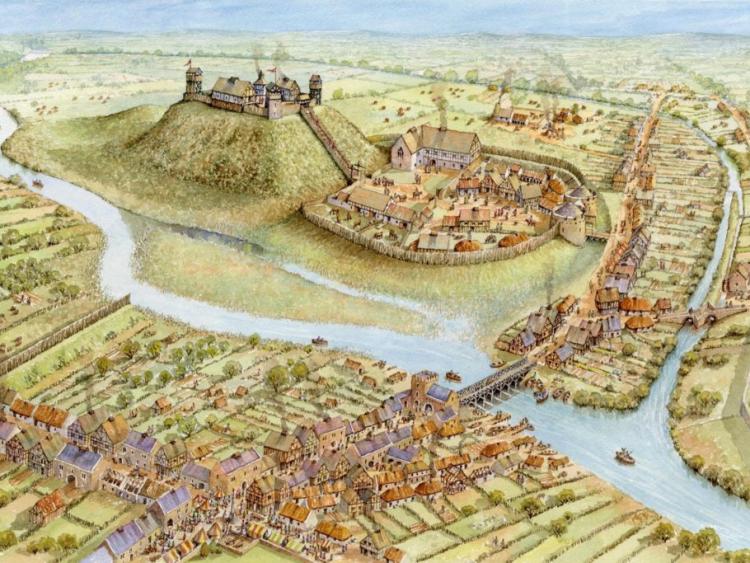 A field that once encompassed a magical castle on a hill is set become a stunning new Town Park.
Callan Motte, known locally as the “Moat”, was built by the Norman invaders in about 1217. It was a wooden castle situated on top of an artificially created mound of earth. It had a wooden palisade and tower. Historical documents refer to it having wooden chambers, a state of the art kitchen (for those days) and a hall covered with wooden shingles.
The Moat field is located in the centre of Callan, west of Upper Bridge Street. The castle served the Normans well as a military post due to its strategic location on the North Bank of the Kings’ River. 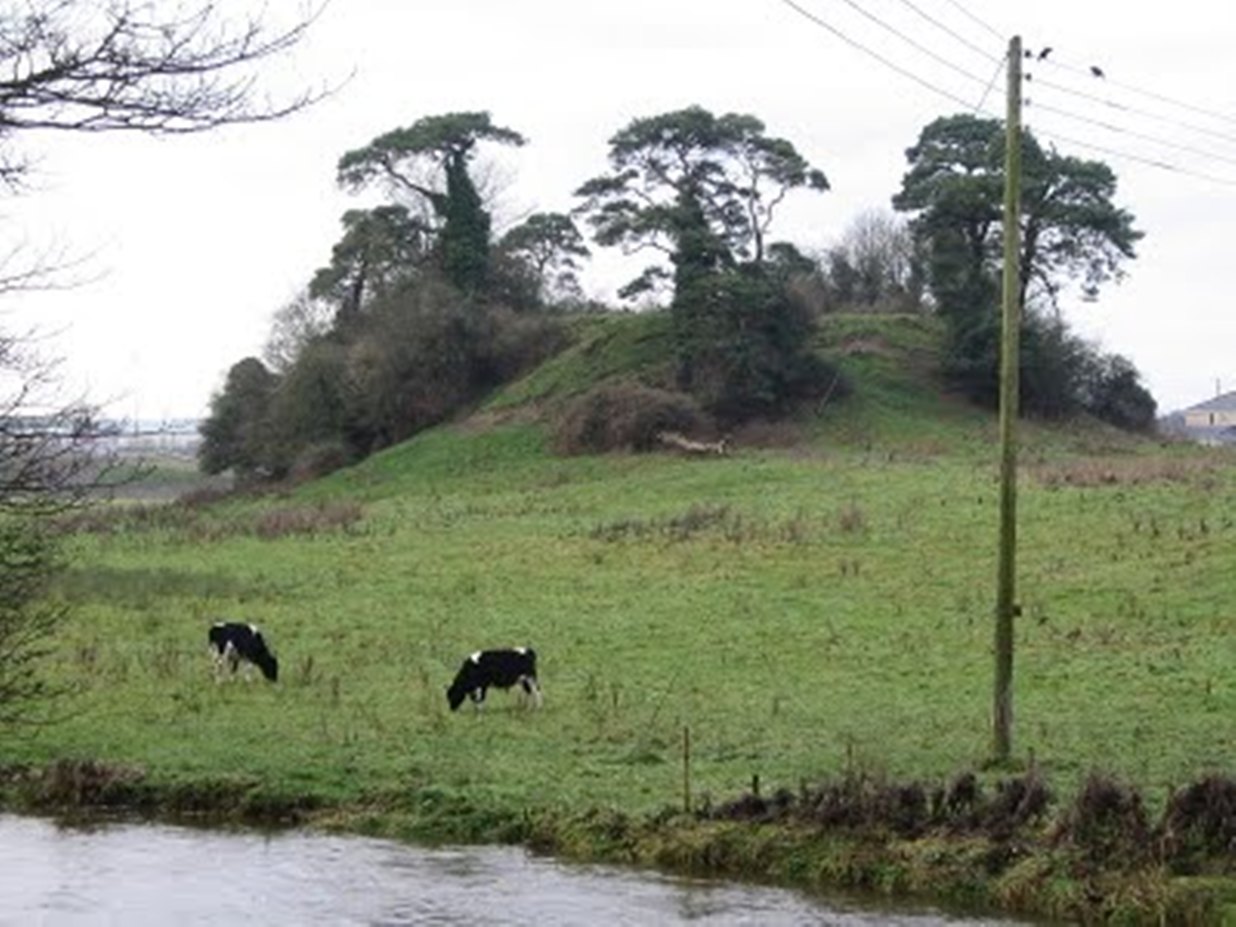 In its heyday, the Castle on the Hill was occupied by the powerful lords of the manor, their families, slaves, and knights at arms. It retained its lofty status until it was abandoned as a lordly residence in the 14th century.
Townspeople looked with awe to the Moat Castle. It was a symbol of power and authority, and reminded them who was in charge. Any breaches of the law were dealt with ferociously by the conquerors, who also, to their credit encouraged free enterprise and helped to transform Callan into a thriving market town.
On a lighter note, tradition has it that three professional jesters were employed to keep the lords and ladies in the castle amused. Each jester entertained with his repertoire of gags, with one big one, the Joke of the Day. The jester who told the least funny joke was tossed off the hillside to tumble down into the briars and nettles beneath. Competition to find comedy material was fierce among the jesters and many a joke ended in tears.
Today, the castle is long gone but the hill upon which it proudly stood remains. It is a recognised national monument and a much-loved local landmark.
For centuries after the departure of its lordly residents from the hilltop, the Moat field functioned as just another stretch of land, with cattle and sheep grazing it. But a little of its former glory was to return when the field hosted the great carnivals of 1959, ‘62, and ‘63.
Carnival organisers decided the Moat hilltop would be ideal for a large marquee to host ballroom and jitterbug dancing. Sporting activities and a funfair could be held in the field that contained the relic of Norman Conquest.
Each night, hundreds of dancers ascended the thirty-nine steps of a makeshift stairway to the summit and entered the huge marquee. They bought their tickets from a woman perched on a stool in a mobile wooden booth that stood close to the bottom step. 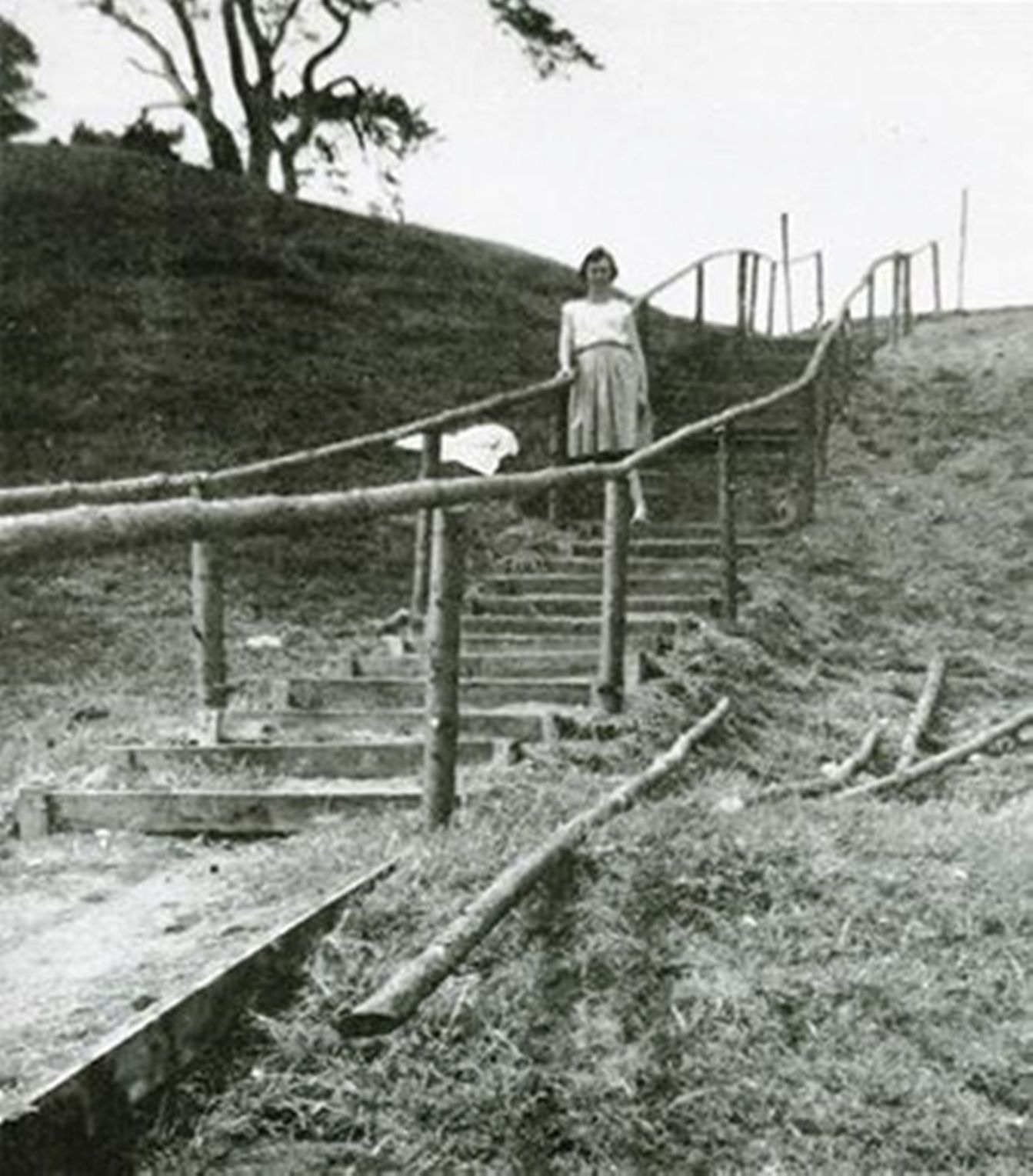 Veronica Butler on the 39 steps

There was no alcohol on sale at the Moat. You had to “tank up” in the pubs before heading for the dance. There was, however, a shebeen on Moat Lane, reserved for a select few, mainly the carnival organisers and their friends Inside the marquee, the best bands in Ireland played and sang the latest musical hits. The couples danced their way starry-eyed around the wooden platform. Love was in the air.
Feast for the eyes
Anyone walking or driving through Callan during a Moat carnival was treated to an unforgettable feast for the eyes: From the Big Bridge, you could see the sparking fairy lights, spread like a carpet across the tops of the Seven Sisters, as the Scotch Pine trees on the Moat hill were called. The kaleidoscopic effect was magical.
As with every function of this kind, there were always a handful of troublemakers and a few highly inebriated dancers who drew the wrath of couples who were still sober or perhaps more conservative in their attitudes.
At the first sign of trouble the stewards would elbow through the throng of dancers, grab the offenders, and throw them out of the marquee. They could be seen rolling down the hill after midnight, through bushes and briars, after being ejected, like ill-fated jesters of old.
But the rough justice meted out to the “rowdies”, as they were called, failed to dampen the spirits of those men and women of all ages who jived, waltzed, shuffled, or quick-stepped in Callan’s hill-top Ballroom of Romance, among them the renowned dancing boxer Jimmy Walsh of Mill Street.
The daylight activities also drew crowds. The whole Moat field was transformed into an amusement arcade and outdoor sporting arena. It resembled a little village, with its smattering of tents, stalls, jugglers, and three-card tricksters.
Wheels of Fortune spun and pillow fights frightened the Callan trout as poles placed across the King’s River accommodated dozens of hardy fellows, and a few sturdy women, who struggled to avoid being knocked into the shallow waters.
Two popular highlights of the week were the Street Leagues, which pitted teams representing Callan’s streets against each other in hurling or football games; and the crowning of the Carnival Queen. Chrissie Carroll and Brenda Phelan were conferred with the title-the first “Royalty” on the Moat to be honoured and curtsied to since the Norman Lords and Ladies packed up and left the Castle seven centuries before.
The Carnival Queen competition was to Callan what the Rose of Tralee event was to Kerry in later decades. Local man Sean Holden as MC had the adoring throng of spectators and admirers in the palm of his hand when he paid homage to the natural grace, beauty and glamour of the comely maidens on the hill.
Though commending such qualities as cuteness, charm, seductive looks, curvaceousness, rosy complexions, and cherry lips, Sean reminded his audience that it was their “personalities” that appealed most to the adjudicating committee. And the audience believed it.
In 1963, Radio Eireann’s whiz-kid broadcaster Larry Gogan came to Callan to crown the Carnival Queen. Chrissie Carroll took the honours that year. The Moat was a “revelation” to him, Larry said afterwards.
The Street League matches embodied the great sporting traditions for which Callan is renowned.
The teams were made up of different age groups, ranging from 12 to 25. They trained for several weeks prior to the big showdowns. Every street in town was represented in the weeklong series of game
After the 1963 carnival the Moat fell silent again...until now. Thanks to Kilkenny County Council, the Moat field is set to become a Heritage Park, with walkways extending all around the vast stretch. Panels will be erected along the scenic route offering information on the fascinating history of the Moat, as well as the multi-faceted flora and fauna.
Those who opt to take a stroll around the Moat will be able to admire the historical vignettes on the panels and enjoy the clean country air. They might also reflect on past glories: The dancing on the hilltop, the street league games, the tumbling jesters, or the comings and goings of royalty back in the mists of time. For in Callan, the Moat will always be our “field of dreams.”