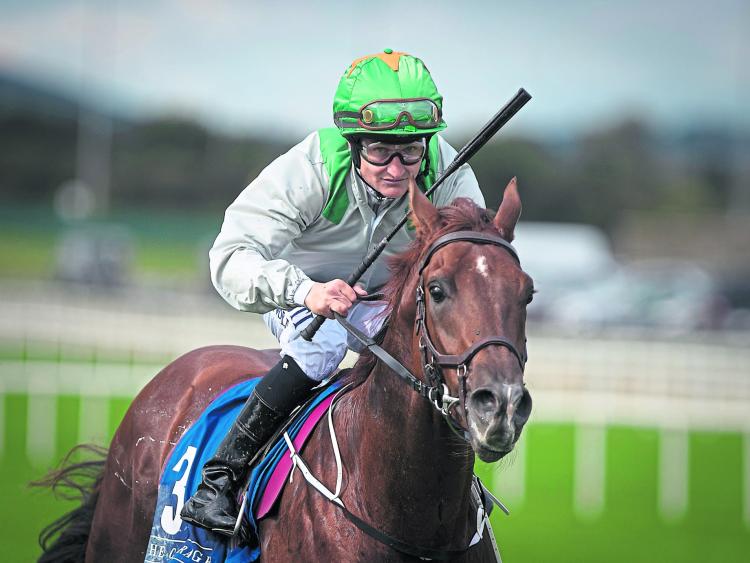 Kieran Cotter gave Shane Foley the first of 3 winners at Navan on Wednesday where Inflection Point won the 5f handicap in more than convincing fashion.

The 4 year old scored from the Mick Mulvany-trained Silver Service at odds of 5/1.

Foley followed up on the Jessica Harrington trained Laelaps in the 8f maiden and on Ger O’Leary’s Newgirlintown in the concluding 10f handicap to bring his season’s tally to seventy five winners, level on the day with Colin Keane in the jockeys championship race and it's set for a hotly contested ending to the season over the next few weeks.

The Donegal apprentice made virtually every yard of the running on the 15/2 chance and held off the late surge of Stormy Belle by a neck.

Browne McMonagle rode his first winner on the same card a year ago and his tally stood at twenty eight winners at the close of play on Wednesday.

Joseph O’Brien added to his success on the Flat at Navan with a winner over hurdles at Galway on Wednesday.

He sent out the Blackrock Racing Syndicate’s Arthurian Fame to win the rated novice hurdle, the 4/1 shot scoring from the Philip Rothwell-trained Behind The Curtain under JJ Slevin.

Shane Foley was a winner again when he shared a first-race success with Jessica Harrington at Thurles on Thursday.

He partnered Sacred Rhyme to an easy success in the fillies’ maiden, the 4/1 chance racing to a 3 and a quarter-length success over the Joseph O'Brien-trained Emphatic Answer in the colours of Ballylinch Stud.

The 6 year old got the better of market leaders The Abbey and Knot On Time to win at odds of 5/1.

Jim Bolger and Kevin Manning maintained their good run of form when Allagar scored by a length and a quarter in the 7f fillies’ maiden at Dundalk on Friday evening.

The 8/1 chance made much of the running to win at the eleventh attempt.

He saddled the John Turner-owned Heaven Help Us to win the mares’ beginners chase, the 3/1 chance impressing with a 5 and a half-length success over the Gordon Elliott-trained Surin.

The Grand National winning jockey followed up straight away on Court Maid in the novice chase.

The Rory Larkin-owned 15/8 favourite led at the final fence and raced clear to score by an easy 9 lengths from the Jessica Harrington-trained Rapid Response.

It was a big day for the Mullins family and it ended on a high as Tom’s sixteen year old son Charlie notched up his first winner, with little help from the stewards.

He was beaten a short-head on the family’s It Could Be You by the Harry Swan-ridden Mind Your Money but got the race in the stewards’ room after he was carried to his left across the track.

Danny Sheehy teamed up with Navan trainer Pat Martin to win the 7f handicap at Limerick on Saturday with the Raymond Moore-trained Indiana Grey.

The 9/1 chance got the better of Count Of Carabass by a neck to give Sheehy his twelfth winner of the season.

Emmet Mullins was among the big winners at the Curragh on Sunday where the Margaret O’Rourke-owned Cape Gentleman scored a 2 length success in the Irish Cesarewitch which was the feature race over 2 miles.

The six-year-old was sent off a 1/3 favourite and only had to be pushed out to beat Damalisque by two and a half lengths.

The 2/5 favourite coasted to a ten length victory over her own stable companion, the David Mullins-ridden 4/1 chance Shanning.

Shark Hanlon is getting a great tune out of Balinaboola Steel and the8 year old was a winner again in the 3m handicap hurdle.

Ridden by Bryan Cooper, the 15/2 shot scored by 2 and a quarter lengths from Ask Heather, trained by Terrence O’Brien.

Joseph O'Brien rounded off the week when taking the concluding beginners’ chase with the JJ Slevin-ridden Home By The Lee who was owned by Sean O’Driscoll.