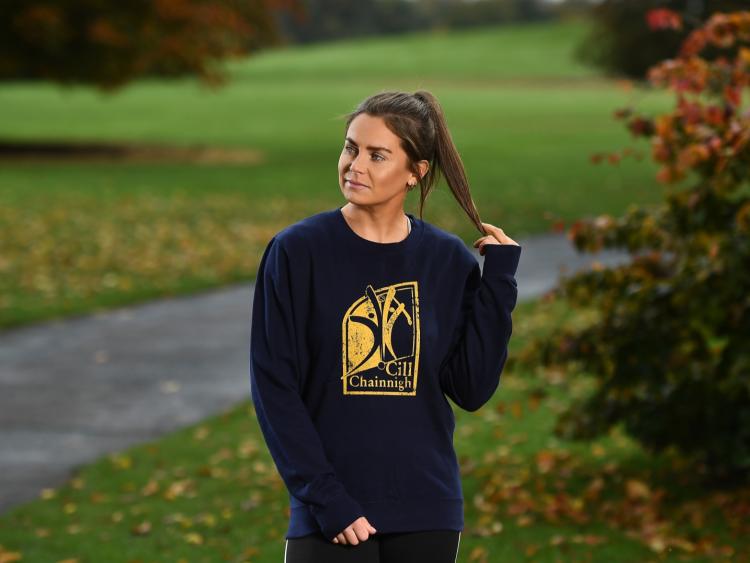 Most people around Ireland are counting down the days until the conclusion of 2020 to eject any memories of this Covid-19 year from their minds.

Kilkenny camogie star Katie Power is one of those people, but her reasons aren’t even related to the coronavirus.
The 29-year-old has endured a nightmare year with three serious injuries curtailing her appearances on the field.

The Piltown player broke her finger twice in the early part of 2020. Then, just when she looked set for a championship return, disaster struck once more when she fractured her kneecap in a freak accident at training.

Power, who has won four All-Star awards and a senior All-Ireland senior camogie title with Kilkenny, has stood up and true to form she tried to put a positive spin on an injury that has ended her season.

“I’m nearly wishing time away and I just don’t know what I did to anybody this year as it’s been a bit of a crappy time,” said Power, who was on hand to launch a landmark partnership between the GAA and Dublin based company, The Marketing Hub.

“I’m trying to look at the positives and there are people in worse situations than myself like business owners,” she added. “It’s obviously raw and disappointing at the moment, but I think with time I’ll get over the injury and move forward from there.

“In January I had the first operation on my hand when they took a bone from there to put into my finger to try and reconstruct it. From there it was going to take three or four months to recover, so I was aiming to be back for May time. Then, as things unfolded with Covid coming into March we didn’t really know if we’d have any games at all.

“I was making good progress and I was almost back, but while lifting light weights in rehab it went again so I had to get another operation and that set me back.

“I was never told I wouldn’t hurl this year and I got back a lot sooner than expected. Then, literally just six days before championship, while playing in a training match I broke my kneecap.

“It’s the second one I broke,” she said. “I broke the other one six or seven years ago now so it’s just very disappointing. As I said it’s just raw at the moment, but with time I’ll get over it.”

The injury was a huge blow for Power, who had started to get back into action with her club Piltown in the last weeks of their season.

“I just caught the very end of the club season,” she said.

“I got two full games when I thought I wasn’t going to get any. After that I was back in training with Kilkenny maybe a week or two afterwards.

“In full I probably had a good five or six weeks with the county and I was feeling great to be honest, nearly as good as I’ve felt in a good few years but the nature of it (the injury) was extremely unlucky I suppose.”

Power is currently unsure when she can prepare for a return to action but is optimistic an operation won’t be needed in her rehabilitation over the next few months.

“I got the first scan 24 hours after the injury so it was hard to get a full diagnosis then as there was still a huge bit of swelling,” she explained. “I’m going back down there this week to basically see where I go as there has been no plan made.

“I’ve been in a brace for the last 10 days and we’ll know more then and a plan will be better known as a result I suppose.
“I’m hoping I won’t need an operation as when I broke the other kneecap it was detached from the slap of the hurl whereas from what the doctor could see it was a freak accident this time around and he’d never seen it happen before without a collision,” she said.

“He’s fairly hopeful that I won’t need surgery and that would be something to be positive about so I’m holding out hope for that over the next few days.”

Despite missing out for the rest of the season, Power has been in attendance at Kilkenny’s opening two games in the Liberty Insurance All-Ireland Senior Camogie Championship against Waterford and Westmeath.

She is pleased with the way her teammates have performed thus far and, despite finding it tough to watch on during these strange times, the forward is just happy to see the sport back.

“I wouldn’t be the best at watching games while injured,” she said. “It obviously was very tough and it’s even strange not travelling on a bus down with the girls and you’re only seeing them going into the dressing room when they pop on their tops,” she said.

“There’s not a huge amount of communication there as in previous years because there is no hanging around and there are no meetings or anything. It was extremely difficult to watch on but unfortunately I have to get used to it for the rest of the year.

While camogie is the pastime and passion for the Kilkenny star, the day job is in a car dealership as well as being a fitness instructor in TJ Reid Health and Fitness. The closure of gyms around the country for the next few weeks has come as a big blow.

“I know you can call it biased as I work in a gym but I think even for people’s heads going in for an hour, three or four days a week is good,” she said. “I don’t see any problem with going in there and no clusters have come from gyms so when you look at it like that they are a very safe environment.

“It’s different than the last lockdown because the weather is not as good and the evenings aren’t as long and it’s harder for people to get out and do something for themselves.

“I don’t see the harm in letting people blow off a bit of steam or clear the head and it is going to affect people unfortunately but it is what it is and we will just have to roll with it.

“Mental health in the last couple of years has become very prevalent,” she added. “I know six weeks is short, and hopefully it does go quick for us, but it could be making someone’s day just getting out of the house as a lot of people will be working from home so they are literally going to be stuck inside for 24 hours if the weather is bad whereas if they had a gym to go to for a 45-minute slot it would get them out of the house and would help take their mind off things.

It is very disappointing though.”

Over the last few weekends camogie has got huge promotion with a series of games being streamed by championship sponsors Liberty Insurance. With no spectators permitted to attend the sport is shining to a completely new audience.
RTÉ Sport will take over once the competition reaches the knockout stages but for now the spectators are being very much entertained.

“Last weekend there was a whole host of games streamed by Liberty Insurance and KCLR had live commentary on the Westmeath game so it’s definitely a positive step for camogie,” said Power. “The more people that see us play the more they’ll see how good we are as camogie players, hurlers and athletes.

“We’ve seen a big problem over the last few years where if they don’t see you they won’t know how good you are so it’s fantastic going forward especially as people can’t attend games at the moment. Hopefully it will continue for the rest of the season. I’m sure it will.”

The increased coverage of Women’s Sport has came as a result of the 20x20 campaign which runs with the slogan “Can’t See, Can’t Be”. While that came to an end last week the drive among participants like Power will ensure Camogie and other sports will be fully on view.

“The 20x20 campaign has been great for camogie,” she said.

“Attendances, media coverage and everything like that has definitely improved a huge amount and it’s very unfortunate the way the campaign ended this year with everything that is going on and they couldn’t have planned for that.

“Over the last few years things have steadily improved though and I think that’s all we can ask for and keep it going that way,” Power added.

“Even though the campaign is over we have to drive things on and there was definitely a huge amount of positives to it and hopefully that will continue to grow over the next couple of years.

“I think people have seen how good women in sport are, whether it’s the Irish hockey team, athlete Ciara Mageean breaking records for fun or the ladies football and camogie breaking attendance records there has been more female athletes on TV screens which is great.

“It’s a big positive which will hopefully continue into the future. I don’t see why it won’t either as RTE and Liberty Insurance are getting behind the camogie and TG4 are doing the same with the ladies football so there’s been a huge amount of effort put in.”

One thing for sure is while she may be down Katie Power is still fighting and while she can’t help with her skill and ability on the field there is no doubting that the Piltown woman will continue to be Kilkenny’s biggest fan from the stands.

Here’s hoping it’s not too long though until she’s back in the black and amber.