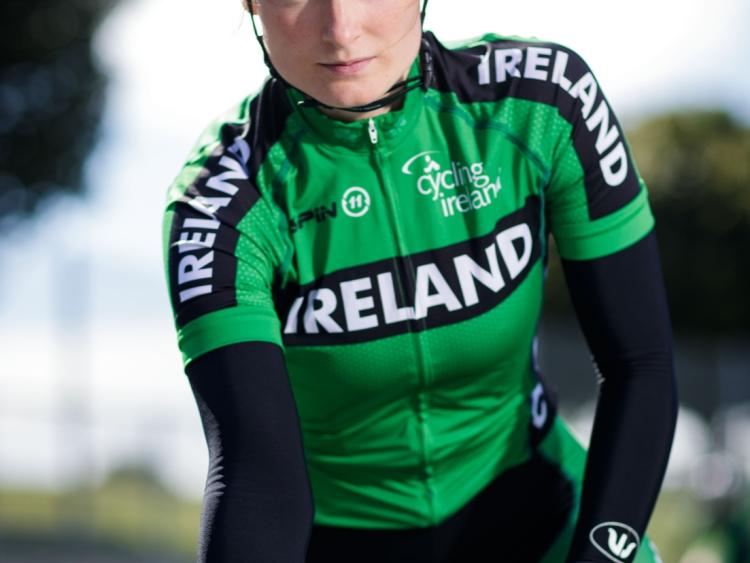 It’s been quite the year for Glenmore’s cycling supremo Mia Griffin.

The 21-year-old’s success showed no sign of stopping when she scooped a bronze medal in the individual pursuit at the European Under-23 Championships in Furezuola Italy recently.

Taking the underage scene by storm, just a few days before her podium finish in Italy she competed in the Cycling Ireland National Road Championship in Limerick which garnered her a fourth placed position while representing the ILLI-Bikes Cycling Team.

Add all that to helping the Irish women’s pursuit cycling team set a new national record at the Track Cycling World Championships in Berlin a couple of months ago and you can see the potential that Griffin has at her disposal.

The Kilkenny woman has deservedly earned a few weeks off but, true to form, she is already looking ahead from her training base in Switzerland.

“Things are good in Switzerland at present - it’s not as bad as Ireland with regards to Covid-19 cases so I’ll be staying here for a while to get my training done. It’s a pretty good place to be at the moment.

“My boyfriend lives over here so it’s fine being away from home,” she added. “I’m used to being apart from my family.

As we don’t have a velodrome in Ireland I have to go to Mallorca to train a lot of the time. Obviously it’s ideal to have your family around but for Irish cyclists it’s just something we can’t have.”

Despite adhering to a rigorous training schedule Griffin did get time to return to her native Kilkenny over the recent months in between lockdown restrictions.

Rather than rest on her laurels though, she got through plenty of work on home soil ahead of a busy period of domestic action on the roads.

“I was training at home in Ireland before I went to the European Championships,”  she recalled.

“I competed at the Nationals and loads of races at home. It was great because all the cycling races went ahead.

The season is now over so we got a decent campaign in Ireland while staying in Kilkenny for a couple of weeks.”

Despite all her success it was the recent European Under-23 Championships that really brought Griffin to prominence when she finished third in the Individual Pursuit in Italy.

Representing Ireland, she surprised a lot of people with the way she performed in the race.

From a personal point of view it was a big achievement, especially as she hadn’t know whether she’d be able to compete or not.

“I was happy with how the European Under-23 Individual Pursuit went as it wasn’t until a week before that we knew we were going to be able to go,” she said.

“We hadn’t done a lot of trap training, so I just took the opportunity,” she admitted.

“I was delighted to be back racing on the track and it was outdoor too so it suited me as in Ireland the road racing builds up the strength in the legs.

“What we raced on was very different to what you’d get indoors as you are dealing with the elements such as wind and it’s not as fast.”

Speaking at length about the whole weekend the Irish athlete detailed what went right and wrong.

From competing well in the qualifiers to arguably overachieving in the finals it was a very successful few days for Griffin.

“Basically I did my first ride in the Individual Pursuit  and I qualified in fourth position,” she said.

“I gauged my ride effort wise pretty well and I did a good warm up and then gave it everything over the 3km. After that I went back to the hotel and had a nap and prepared to go again in the finals.

“I went off against an Italian girl who had been World Champion in the Junior ranks,” she added.

“I thought to myself that I had nothing to lose really and I’ll just go out and give it a lash.

“I was sitting beside her before the race and I was thinking she looked nervous, so I knew it was going to be a good race then. I felt better than I ever did before.

“I was delighted really,” she added.

“I wasn’t expecting to win a medal in the first event  because I’ve had so many disappointing days. It was just great to get a result that I was working towards.”

Griffin’s rise over the last few seasons is even more remarkable when you think where she came from.

Hailing from a hurling stronghold in Glenmore, rather predictably camogie was the first love but after getting into cycling by chance three years ago there has been no stopping Griffin ever since - her progress is consistently on the up.

“Not coming from a background in cycling means the progression has been hard for me,” she explained.

“As I played camogie before concentrating on cycling I’ve only really been doing it for three and a half years, but to get a medal at the Europeans was a surprise for me. I’ve worked hard and the coaches have really pushed me so I’m really happy.

“It’s mad the progress I’ve made in such little time and in a way I’ve squashed all my experience into that small period,” she added.

“Even saying that in the three years I have had some great experiences with the Irish team.

“One of the advantages of being in a smaller team is that I get opportunities all the time to ride in big races. Normally young people my age wouldn’t get that chance as they are up against older and more experienced riders but I’ve been lucky to compete in World Championships at senior level before.

That’s why I wasn’t that nervous in the European Under-23 Championship - I’ve been through worse.”

There is a lot of action scheduled for the upcoming weeks on the global stage for Griffin.

Despite there being a few changes to the calendar as a result of the coronavirus pandemic there is still much to look forward to.

“We were meant to go to the European Championships in Bulgaria but the way it is now with track cycling they have changed the season around to the Summer time whereas it is usually on in the winter,” she said.

“The  Championships are on in the next few weeks, but there are also the Europeans in three months which may not happen so because of lockdown I won’t be going to the one that’s in a few weeks as I wouldn’t be sufficiently prepared as it would stand now,”  said Griffin.

“The track as it stands is still a Covid Hospital so the risk is too great in travelling somewhere like that.

“Hopefully in a few months we’ll get to go to the Europeans,” she added.

“They will be held in Appledorn in the Netherlands but it’s still uncertain whether we’ll be able to go there.

“At the moment all of us are taking a break and then we are going to do some base training. We’ll then see if we can travel to Mallorca to do track preparation for the championships.

“At the moment I’m racing a bit of track in Switzerland as well as training,” she continued.

“If the Euros go ahead I will be well prepared. Hopefully we get to meet back as a team before then too. We have been doing zoom calls but it’s not the same as training together or being together in real life.”

Looking past the next few weeks and months the Irish cyclist’s main ambition is to qualify for the Olympic Games in 2024 but there is a lot of water to pass under the bridge before she reaches that stage.

In the short term there are a number of Major Championships to get excited about over the next two years for Griffin and her teammates.

“It’s hard to know what my ambitions would be with the season that’s in it,” she said.

“For the Europeans a medal in the team pursuit would be amazing and I think it’s something we would be capable of if we are able to prepare properly.

“I’ll also be doing the individual pursuit where I’ll be hoping to put down a good time indoors at the Senior Europeans so that I have a baseline time indoor - the outdoor is very different.

"I hope I can transfer the power I have on an outdoor track into an indoor track and even that in general would be pretty cool".

“Other than that my road team has turned UCI which means they can compete in World Tour and Professional races, so I’m looking forward to doing some big road races next year as well.

“Otherwise I will be focussing on the track events like the Nations Cups and the European and World Championships.

“Team Pursuit will be a big focus but I also want to try some more bunch racing as I got a taste for it the European Under 23s,” she finished.

“It’s something I’d like to give a good go over the next few months.”

All in all Griffin  is a hugely talented cyclist who has achieved a huge amount in a relatively short space of time over the last few years.

While a lot has been done the sky is the limit for much more success over the next while.