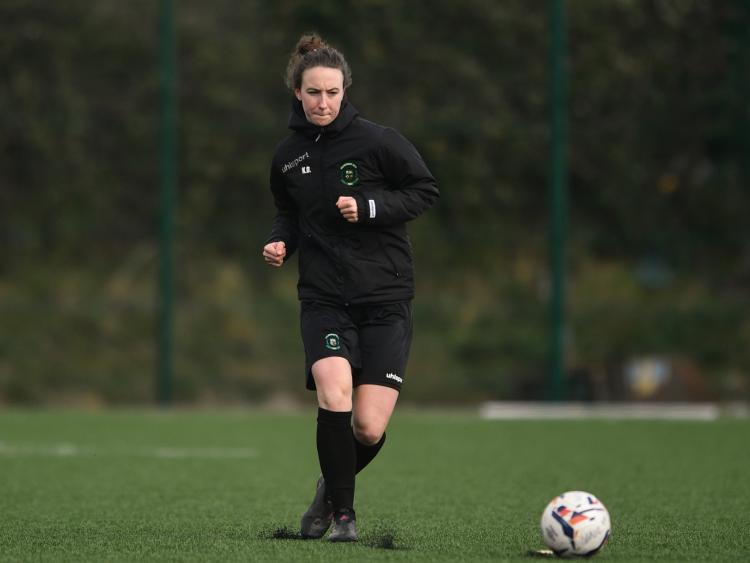 Peamount United are a step away from Europe’s big stage, but Karen Duggan and her team-mates are ready for action.

United are facing into a big challenge as they get ready to take on Glasgow City in the qualification round of the Champions League this evening (Wednesday).

After winning the last 13 Scottish League titles and reaching the Quarter-Finals of last year’s Champions League it really is a big step up for the Irish champions.

However, Duggan is one of the stars in the Peamount ranks.

She knows exactly what lies ahead for her team.

“Preparations are going well,” the Piltown native said. “We are coming into the game off the back of a couple of good results in the League so confidence is high enough.

“Obviously we got the toughest draw in the qualifying round of the Champions League and it’s a different format than usual, so we don’t have the same opportunity to finish as a best runners up but we will go over there full of confidence after our recent performances,” she added. “We’ll be looking do ourselves and the Women’s National League proud.

“We’ve got a really strong squad this year and there is a lot of competition for places,” Duggan said of the Peamount side.

“A lot of the girls have represented Ireland at underage and senior levels. Obviously Glasgow are also stacked with internationals. They have won their league for the last 13 years in a row and they’ve plenty of Champions League experience.

"Maybe we are coming in a bit raw as not too many of us were involved when we were there seven years ago.

“All we can do is go and try play our own game but obviously be respectful as they are such a good side and they had a great run in the Champions League last year.

"They will be hot favourites but we’ll plan for that and go over and do our best".

“The competition for places has been a massive part of our training this year,” she continued. “It’s really upped the intensity so it’s been a really good week and we’ll go in there ready to give it our best shot.”

There is a fair bit of familiarity between both clubs with numerous Irish internationals on show.

Peamount have a host of Irish stars at their disposal including Aine O’Gorman, Stephanie Roche, Niamh Farrelly, Claire Walsh and Niamh Reid-Burke and they will come face-to-face with Clare Shine  and Tyler Toland on the Glasgow side in a hugely appealing tie.

“It’s brilliant that there is such a large Irish representation scattered throughout the Champions League,” said Duggan. “It shows how far football in this country has come.

We’ll obviously be looking forward to going over and seeing the girls and experiencing the level they play at and testing ourselves at that level.

“It will be great to see them,” she said of the Irish contingent in Scotland, “but we’ll definitely be looking to get one over on them.”

The Glasgow test is a huge one for Peamount. Luck hasn’t been on the side of the current Women’s National League leaders with a one-off tie bringing them to Scotland.

“There’s no hiding from the fact that Glasgow were the top ranked seed in the qualification,” said Duggan.

“The format of this year’s competition has worked against us a little given our geographic location as well as seedings and one off playoffs.

“We know we are lucky to be able to compete in these competitions and to be able to continue playing in the Women’s National League as we are considered an elite sport so there was a fear that we wouldn’t even get the chance to play Champions League football this year.

“It’s a bonus that we get to go over and play and test ourselves against quality opposition like Glasgow.”

Going away from home has meant Duggan and her team-mates have had to be ultra cautious on their movements as they undergo a series of tests with regards Covid-19 and the responsibility that is on their shoulders.

“We’ve undergone a few rounds of testing and we got a chartered flight so there’s all the additional precautions,” she said. “We’ve been very conscious that we can’t spend time in dressing rooms together or anything like that.

"All the girls are very good arriving for training with their masks on. Every time there is a break in training our equipment manager Barbara Anne Doyle is over with the hand sanitiser".

“We’ve taken every possible precaution that we could to protect each other and our families so we can go over with a strong squad and be fully representative of the Peamount club.”

Women’s football has never been more popular than it currently is in Ireland.

After big numbers tuned in for the recent Republic Of Ireland and Ukraine European Championship Qualifier there is again the chance to throw the sport into the spotlight with BBC Scotland showing live coverage of the glamour fixture.

“They’ve been really good to showcase what the Glasgow girls have been doing so we are lucky in that respect and we can piggy-back off their success.

“It’s great to be shown on a national TV station like that. Hopefully our family can see us at that level.

We’ll be hoping to showcase ourselves at that level and hopefully represent the Women’s National League with pride.”