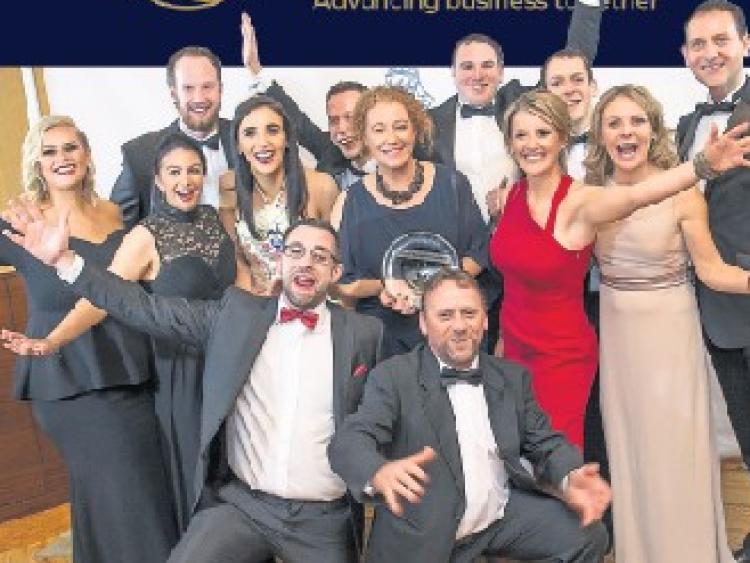 The cover of the supplement in this week's Kilkenny People

Kilkenny Chamber has just announced the winners of the President and Lifetime Achievement awards for 2020.

President of the Chamber Colin Ahern continued the tradition of naming the two winners - despite the Awards ceremony not going ahead this year due to Covid 19 restrictions.

Mr Ahern congratulated both winners, remarking on their resilience and spirit which will be an inspiration to all in business in Kilkenny as we come to grips with the pandemic, and its aftermath.

See write ups below on both winners

Bobby Kerr is a proud Kilkennyman who has always maintained strong links with his native city.
He grew up on the ’Comer Road and learned about hospitality from his father, also Bobby, who had led the consortium that built the landmark Newpark Hotel, Kilkenny’s first Grade A hotel.
Bobby went to school in the local CBS, followed by a five-year stint as a boarder in Castleknock College in Dublin and went on to study catering at DIT Cathal Brugha Street Dublin. His first catering jobs took him to work on Scottish oil rigs and then to Canada, before he returned to Jury’s Hotel Ballsbridge and on to Campbell Catering where he was responsible for growing the Bewley’s Brand in Europe as well as running the brand’s Irish Café, Bakery and franchise operation.
Bobby’s interest in coffee forms a strong thread though his career. He next grew Perk Coffee Shops from one shop to a 1.5 million turnover before selling at a substantial profit to what became the Insomnia Coffee group which he subsequently reinvested in. 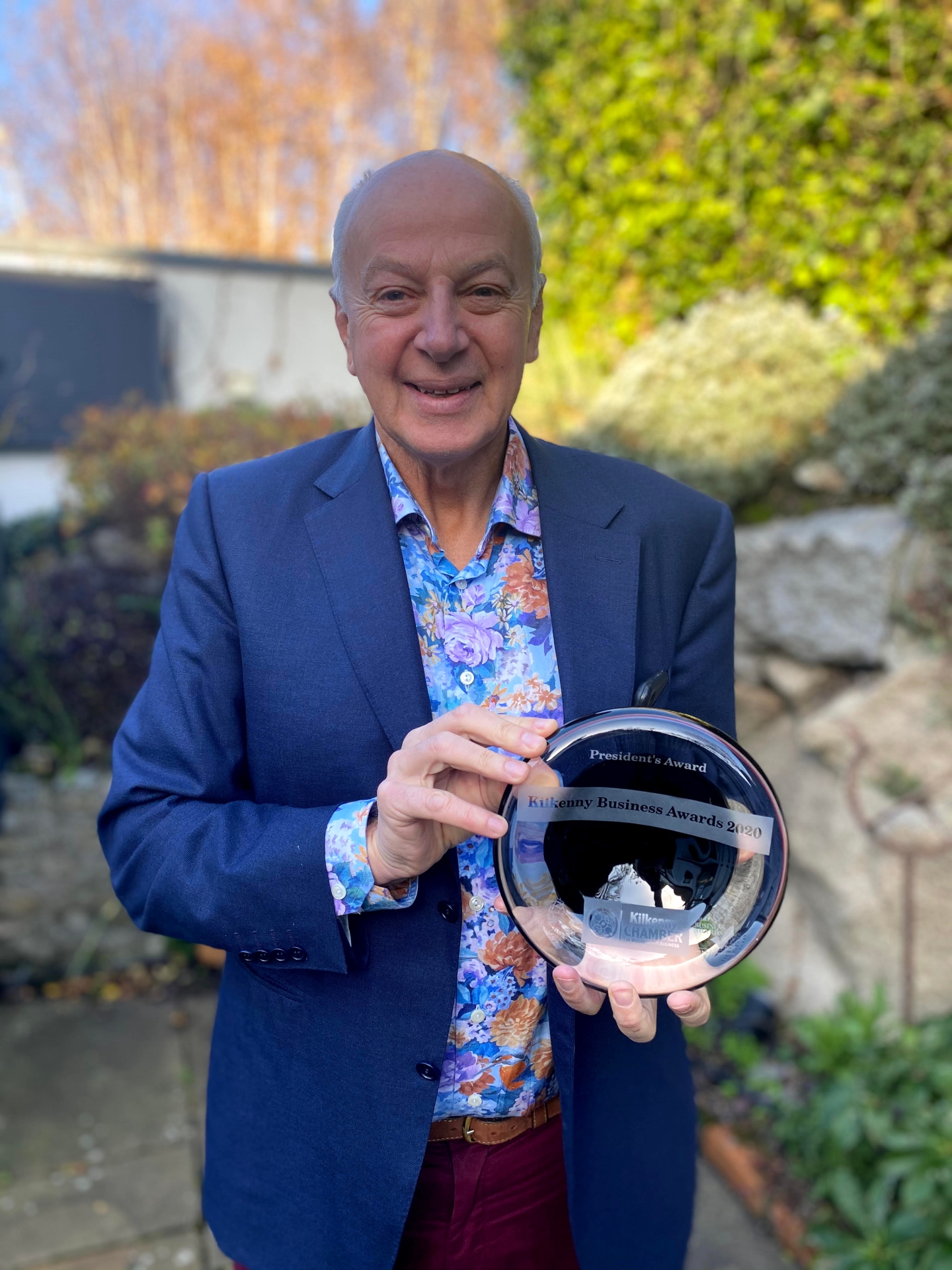 Bobby Kerr with his award

With the passing of his father in 2001 Bobby became chairman and co-owner of the hotel that his father had built and he himself grew up beside - Kilkenny’s Newpark hotel. After significantly developing the hotel in 2007 he oversaw the sale of the hotel to the current owners, the Flynn family
Bobby is passionate about small business. He sat on the board of Microfinance Ireland for three years. MFI is a ‘not for profit’ lender that provides loans to small businesses of less than 10 employees with a turnover of less than €2 million. This organisation has €90 million in funds to lend to small business over a 10-year period. Bobby was also a member of the Small Business Advice Programme – a targeted programme set up to provide free advice and support to SMEs. He is also a popular public speaker, business mentor and motivational speaker.
Bobby also chaired the business development group for An Post, a group set up by the Minister of Communications in 2015 to decide the future of the Post Office in both urban and rural Ireland. He is the author of “The Kerr Report” which maps out a blueprint for the future of the Irish Post Office network.
He is also chairman of The Great Lighthouses of Ireland and is also chairman of the Board of the Cliffs of Moher Limited as part of his maritime interests. Bobby has been a keen yachtsman for the last 25 years, having started sailing when he worked in Cork. He has his own yacht and races competitively in Dun Laoghaire every Thursday evening and Saturday afternoon in the Summer.
The hallmark of Bobby’s career is variety. He enjoys the challenges of business, building success and change.
Bang Cafe on Merrion Street is a good example. As part of a consortium he and two partners bought Bang Café from a liquidator in 2010 and built it to its current Michelin recommendation standard. In 2018 Bobby sold his interest to his business partner.
These days Bobby is most best known for his roles in Insomnia and Newstalk. His media career began as a Dragon on Dragons Den, where he participated in the first four series. He still retains an interest in eight businesses that he backed on the show.
His maritime TV documentary eight-part series “Along Home Shores” was filmed and aired in 2016. This saw Bobby circumnavigate Ireland looking at life, history, sport and business with water being the common theme.
For a decade now he has been one of Newstalk’s best known voices on shows dealing with all aspects of business and has become one of our most respected broadcasters.
From 2004 to 2010 as chief executive and co-owner Bobby grew the Insomnia turnover from €3 million to €25 million, making it Ireland’s largest independent coffee chain. He became chairman and a major shareholder from 2010 to 2018. When he exited in 2018 to take the role of chairman it had 140 shops, including two in Kilkenny, and over 500 forecourt and convenience store outlets. Insomnia employed over 500 people and sold over 14 million cups of coffee a year.
Bobby has been an active fundraiser for the Blackrock Hospice for many years and in 2011 raised over €40,000 or Habitat for Humanity by taking part in a building trip in Zambia. He has been involved in the Shine a Light campaign against homelessness for Focus Ireland for many years and in 2019 was part of a team of climbers who climbed the 14,000 feet Pointe Burnaby, the fourth highest peak in the Alps to raise over €100,000 for The Caroline Foundation.
When the Kilkenny-Waterford boundary story broke Bobby was quick to don the Kilkenny jersey with an insightful article in the Sunday Independent making the Kilkenny case.
Bobby lives near the sea in Sandycove with his wife Mary. They have four daughters, Meghan, Emily, Rebecca and Michaela. He describes himself as “blessed among women”.

The Lifetime Achievement Award is one of the highlights of the annual Kilkenny Business Awards.
It is chosen by the President, currently Colin Ahern, to recognise someone who has made an exceptional contribution to the business dynamic of Kilkenny over their career, somebody who has helped put Kilkenny on the map as a great place to live and do business.
Kitty Donohoe is undoubtedly an ideal recipient.
Kitty was the driving force behind the family business, Goresbridge Horse Sales, which was started in 1968 by her husband, Ned. His untimely death in 1978 placed her, a non-horsey 42-year-old mother of nine children with another baby on the way, at the helm of what has become Europe’s largest auctioneer of sport horses. At the time she very much appreciated the help of Ned’s brothers, Michael and Paddy. 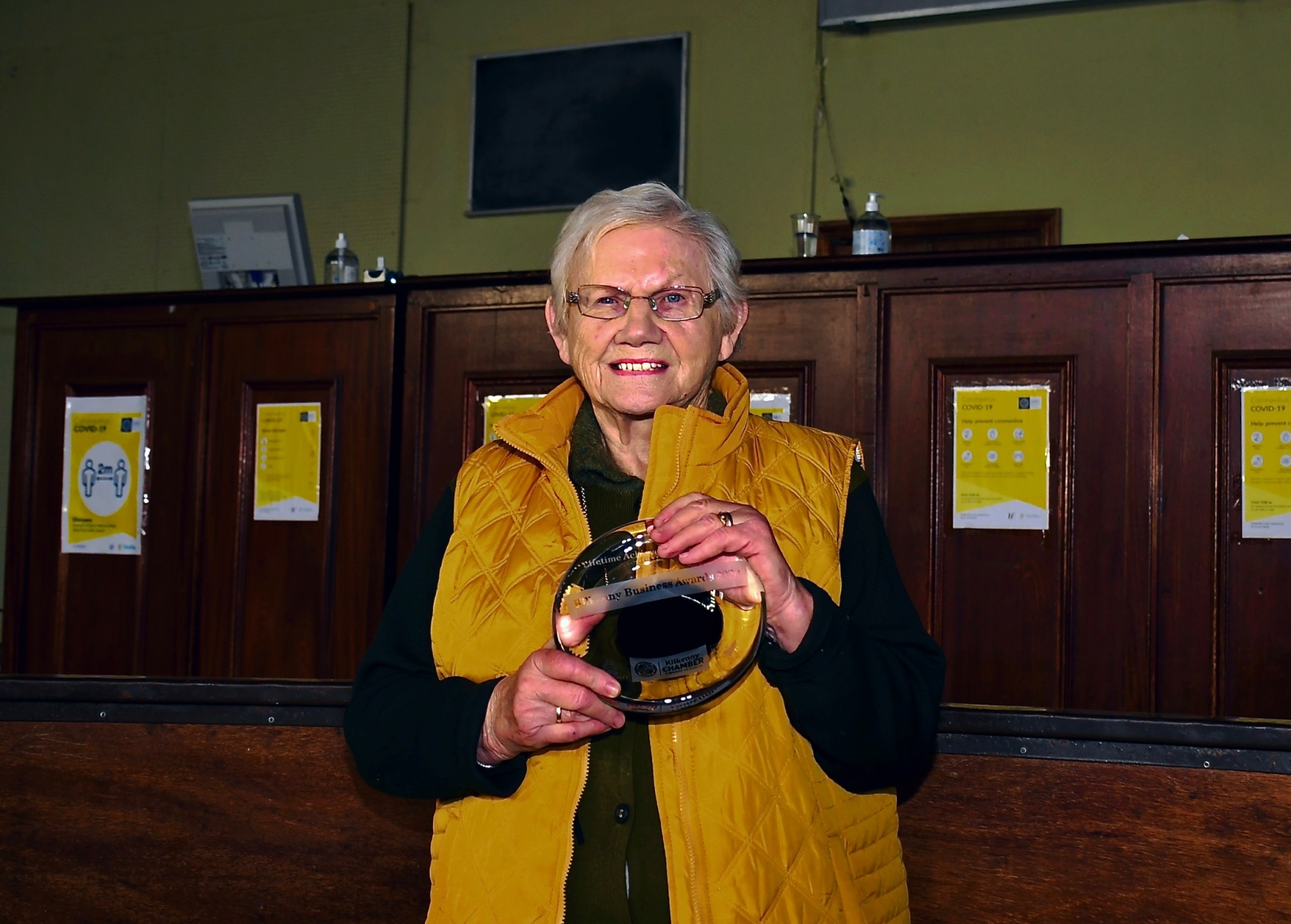 Kitty Donohoe with her award

Goresbridge is the established marketplace for experienced riding horses and school master ponies, as well as unbroken young stock and potential show jumping stars. It is a formal sale, complete with auctioneers and traditional sales ring and has a well-deserved reputation for its friendly, businesslike and thoroughly modern atmosphere.
It is now run by Kitty’s eldest son, Martin, with his mother always available for support and advice when needed.
Following Ned’s death Kitty faced further challenges. Less than two years later her 10-year-old son Jack succumbed to measles, a deadly disease in those days. She never missed a day visiting him in hospital in Dublin.
She was later to spend five months herself in hospital after a very serious car crash. Her children recall her determination to get back to full activity and her attitude “sure the scars will make me more interesting!”
Kitty is a woman ahead of her time. Not for her any concerns about glass ceilings and equality. Kitty was the first woman appointed to the Irish Horse Board. She drove the business forward, while raising her young family, displaying a model of can-do attitude to all who did business with her. It was well summed up at Kitty’s 80th birthday by one of her daughters, Mag Kirwan of Goatsbridge Trout Farm, who recalled the quote from Eleanor Roosevelt - “A woman is like a tea bag. You never know how strong she is until she gets in hot water”.
Kitty has always been a model of perseverance, strength and courage and the lessons have been well learned by her children who successfully contribute to all aspects of Irish life in the South-East.
Kitty remains fully involved in Goresbridge life. She is a member of the local Scrabble group and a great supporter of Active Retirement in Borris, but likes to remain behind the scenes in her support for causes. She is proud of the work done by her sister, Sr Rita Carey, a Brigidine nun working in South Africa.
For President, Colin Ahern, Kitty was an obvious choice for the award.
“I am filled with admiration for what Kitty has achieved and the manner in which she did it,” he said. “Her contribution to business in Kilkenny is enormous. In all aspects of life she sets high standards. Everyone in business could learn a lot from her.”