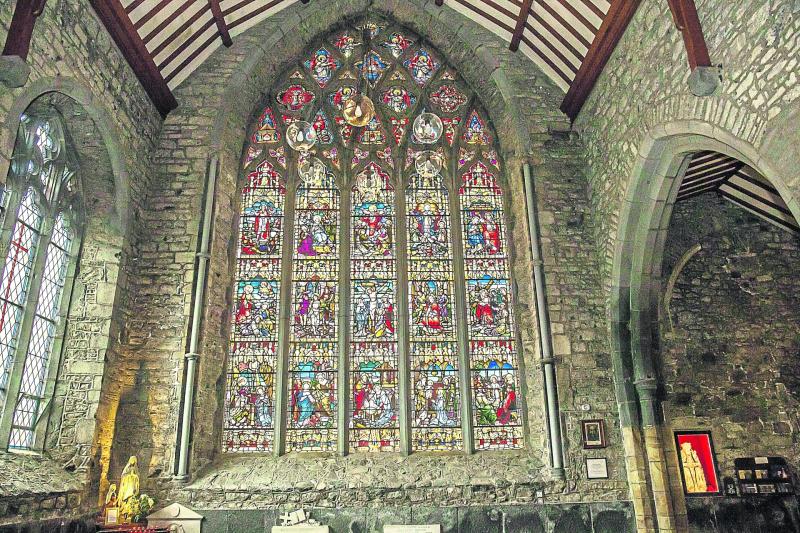 Good God would we be locked out of Mass? Had we to break our tradition of 30 years? And so it came to pass that, with a degree of fear and trepidation, I phoned the Black Abbey

Well, well, well - did I ever think I’d see the day? The day you’d need a ticket to get into church!
The day you’d need a ticket to hear Mass! The day you’d see ‘Booked Out’ posted on a church door! Booked out for, not one, but two masses! Christmas Eve masses.
The following featured on Facebook regarding Christmas Eve masses in St Mary’s Cathedral: ‘Please note the 6pm Mass on Christmas Eve is access by ticket only.’
And did I have a ticket? I did not. And you know what? It serves me right. I wouldn’t go to Mass when it was ‘free’ or rather ‘ticketless’. When you could walk in and sit yourself down in the best pew in the church. When you could get up close and personal, almost, with the priest and hang on his every word. What’s this they say – ‘you’ll never miss the water till the well runs dry.’
Well, the ‘well’ damn near ran dry this Christmas Eve. Christmas Eve, my second favourite day of the year (after Christmas Day). Christmas Eve, when our family goes to Mass in the Black Abbey to celebrate the birth of Christ, something we’ve been doing for nigh on 30 years now.
And this year our family was hosting a special guest – Constanza, from Argentina, my son’s girlfriend, who has a Catholic background, and upbringing, like ourselves and who would, we knew, appreciate the ceremony and ritual; a ceremony, and ritual, that are part and parcel of our family, and hers, from early childhood. If not earlier.

And so the panic set in. The ticketed St Mary’s Mass and the ‘Booked Out’ Friary Masses were not on our agenda, so to speak, the Black Abbey was but would we get in? Did we need tickets? FIVE tickets!
And I’m thinking of All-Ireland hurling finals now and the lunacy of looking for, or daring to ask for, five tickets! Five tickets together!
Madness. Good God would we be locked out? Locked out in Lockdown! Had we to break our tradition of 30 years? And so it came to pass that, with a degree of fear and trepidation, I phoned the Black Abbey.
First off I checked with the friendly voice at the other end of the phone if masses were going ahead. ‘Yes, my child, they are.’
That’s not what the voice actually said; that’s what I almost expected to hear from years of gentle, one-to-one, whispered dialogue in the confessional when, with genuine fear and trepidation, you bared your soul and confessed your sins. Yes, masses were going ahead. ‘Do I need to book, Father? Do I need to acquire a ticket?’ I didn’t, thank God. ‘Come along and if there’s room go in.’

MUSIC TO MY EARS

Those words were music to my ears. My lapsed, collapsed, whatever, Catholic ears.
Our Christmas Eve tradition of mass in the Black Abbey (where I served as an altar boy for several years) would not be broken. I hoped. But I was not prepared to rely on hope.
For the first, and I would say only, time in my life I, along with our family and Constanza, of course, arrived in church a full 45 minutes before Mass was to begin. A record for sure for one who has a habit of leaving things to the last minute. Last second even.
We were met in the Black Abbey by a most genial gentleman, an usher, who had little ushering to do with us as the church was empty. We had the pick of the pews and settled for where we always sat, or as near as, throughout the years.

And yes, we missed the choir, a bit iffy some years (part of your charm), but by God we missed you terribly this year; missed the procession to the crib and the accompanying innocent, cherub-like children; missed the smell of incense wafting around those hallowed walls; missed the faces of friends and neighbours we used always meet.
But we were grateful, glad to be there. Without a ticket! Without booking!
And what I took away from this year’s Christmas Eve mass in the Black Abbey were the words of the celebrant Fr John Bulman (a Cork name his fellow Dominican informed me) who, in his succinct homily, reminded us that regardless of Covid, regardless of all that is different now: ‘Christmas can never be different.’
It wasn’t. And it never will be.