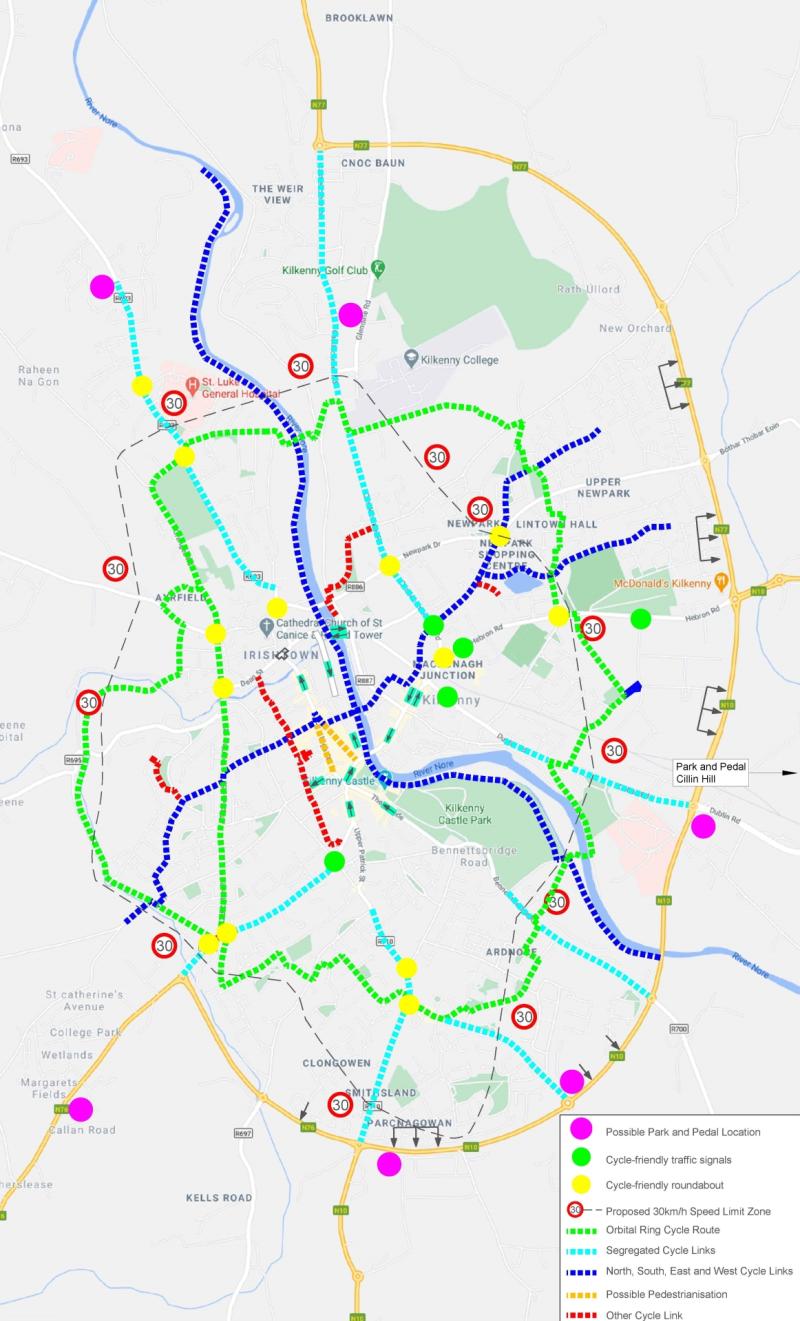 Some of the proposals contained in the presentation

A city-based study on cycle routes in and around Kilkenny was presented at a recent meeting of the Kilkenny City Municipal District.
Chartered engineer, Dermot Donovan made the presentation, which was commissioned by Kilkenny LEADER partnership in conjunction with Kilkenny County Council.
The study proposes cycleways from cardinal points​ including the River Nore crossings​ at Mount Brilliant​ and Lacken​ and the development of an Inner Ring Cycleway​.
The plan also includes for the provision of Park and Pedal​ facilities and the introduction of lower speed limits in certain areas along with ​junction upgrades​.
“The number of people who enter Kilkenny City is three times more than the amount of people who leave during the day,” said Mr Donovan, who explained that this creates a need for Park and Cycle facilities which will allow people to park on the outskirts of the city and pedal into the centre. Mr Donovan also told members that if speed limits in certain areas were reduced to 30 kilometres an hour this would make cyclists feel safer.
“The core city streets are narrow and there are relatively high levels of traffic.” he said and spoke about the possibility of pedestrianising High Street and possibly Parliament Street which would reduce vehicular traffic in the city. He also spoke about removing ‘cross city traffic’ from John’s Bridge and improving access to city carparks.
The plans also outline improved signage and expanded cycle parking​.
Mayor of Kilkenny, John Coonan described the proposed plans as ‘very exciting’ while Cllr Joe Malone said that the presentation was ‘absolutely fantastic’ and welcomed the possibility of a Park and Cycle scheme which would provide ‘cheaper parking on the outskirts of the city’.
Cathaoirleach Andrew McGuinness thanked Mr Donovan and his team for the presentation which he described as ‘very positive’ and added that the proposed crossings at the Lacken and Mount Brilliant are ‘fantastic’.
Cllr Andrew McGuinness highlighted the need to carry out improvement works at the boardwalk on the Lacken Walk if it is to be included in any future cycling plan for the city.
“It has become obvious during the pandemic that the boardwalk at the Lacken Walk is far too narrow. It is impossible to pass if someone is on a bike and someone has a buggy. We need to look at widening the boardwalk in future. We also need to up the ante in terms of campaigning to get the Ring Road completed and we also need to get more parking facilities for bikes,” he added.
Cllr Eugene McGuinness said that it is ‘absolutely vital that there is more parking on the outskirts of the city and that we encourage people to use bikes and walk and use the bus service.”
Cllr Maria Dollard commended the ‘whole vision for how the city can look and how we can futureproof it’. Cllr Martin Brett told the meeting that ‘the generation that will come after us will enjoy a better way of living’ and added that ‘the pandemic has got a lot more people walking and cycling’.
Cllr David Fitzgerald said that the presentation showed a proposal that would require ‘a major policy shift in the future planning and design of the city’.
“I would like to put this forward and that it is adopted as policy in the County Development Plan,” he said and also told members that he is promoting and proposing the possibility of a North/South Greenway in the county.
Mr Donovan told members that ‘a broad-based initiative has benefits for us all’.
Director of Services with Kilkenny County Council, tim Butler said he would look into whether the presentation can be included into the Court Development Plan while City Engineer, Ian Gardner remarked to members that it is ‘a complex process’ to come up with a traffic management plan for the city.