Mullins signing in the rain at Punchestown 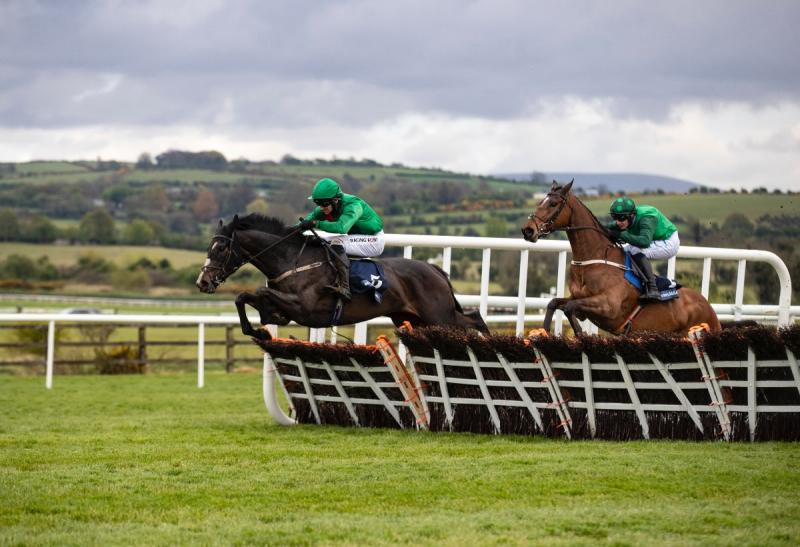 The Champion Hurdle could be in the stars for Echoes In Rain and her connections in 2022 as she scored in the first Grade 1 of the Punchestown Festival, the eCOMM Merchant Solutions Champion Novice Hurdle.

In the process, Patrick Mullins landed the first blow in the battle for the Qualified Riders’ championship, and prevented Paul Townend doing likewise in the quest for professional honours.

The winner went off the 8/13 favourite despite Townend opting for Willie Mullins stablemate Blue Lord on his first ride back since injuring his foot in a fall at Fairyhouse on April 4.

The 30-year-old made the running on his charge but was sending out the distress signals turning for home, with Mullins Jnr swooping by to take it up before the last and racing away to win by three and a quarter lengths.

Colonel Mustard ran on past Blue Lord to take second for trainer Lorna Fowler at 40/1.

“That’s a great way to start the week,” enthused Patrick Mullins, who moves one ahead of Jamie Codd to lead 46-45 in the defence of his title. “It’s going to be nip and tuck all week to be sure.”

“Rachel Boyle rides her at home and did a fantastic job to get her to settle. She’s fantastic to lep.

“I was trying to keep in tight around the bend and once I got out she picked up again.

“The team here at Punchestown deserve huge credit. The weather has been so dry, this is perfect racing ground.”

His father did not rule out lofty targets for the five-year-old filly, who has matured since disappointing at this venue last January and was recording a third consecutive triumph.

“She is a filly that’s improving as she learns about racing. She just made one mistake and Patrick blamed himself because he didn’t want to let her jump it as well as she was setting herself up to jump it because she was going to land there too soon and he let her fiddle it. Everything else was good.

“She’s a filly that’s now after winning at top class and hopefully that’s where she’ll say for the next couple of years.

“She’s improving every day and she looks like she’s setting herself up to have a chance at going for a Champion Hurdle.”