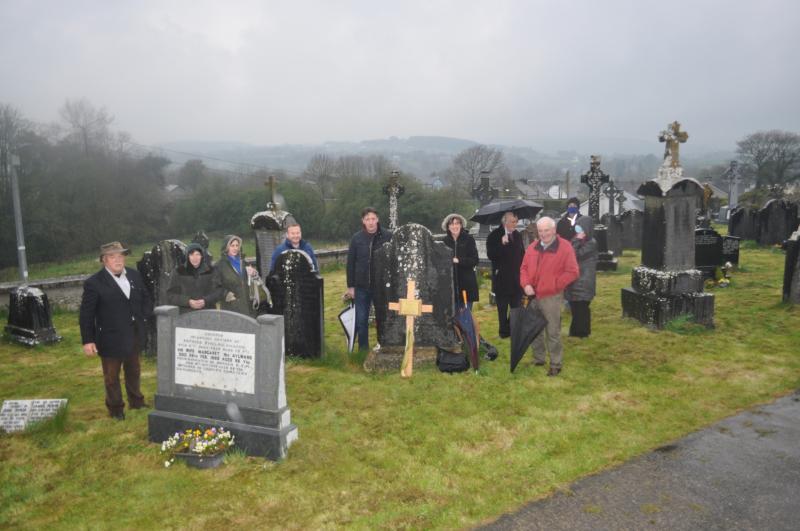 The group who attended the ceremony at St Beacon’s Cemetery

St Beacon’s Cemetery in Mullinavat was the venue for a special ceremony to mark the tragic death of a Kilkennyman during the War of Independence.

Family members were among the small group who marked the centenary of the passing of 23-year-old James Hoban, who was gunned down in Mullinavat on April 19, 1921.

Hoban, a farmer’s son who hailed from Glendonnel, Mullinavat, was selling pigs at the Fair of Mullinavat, with his elderly uncle James Walsh, when the tragedy occurred.

The records show that James Hoban was hit by many bullets which were discharged from a machine gun mounted on the top of a Rolls Royce armoured car. The soldier concerned hit Hoban in both legs from about 100 yards. 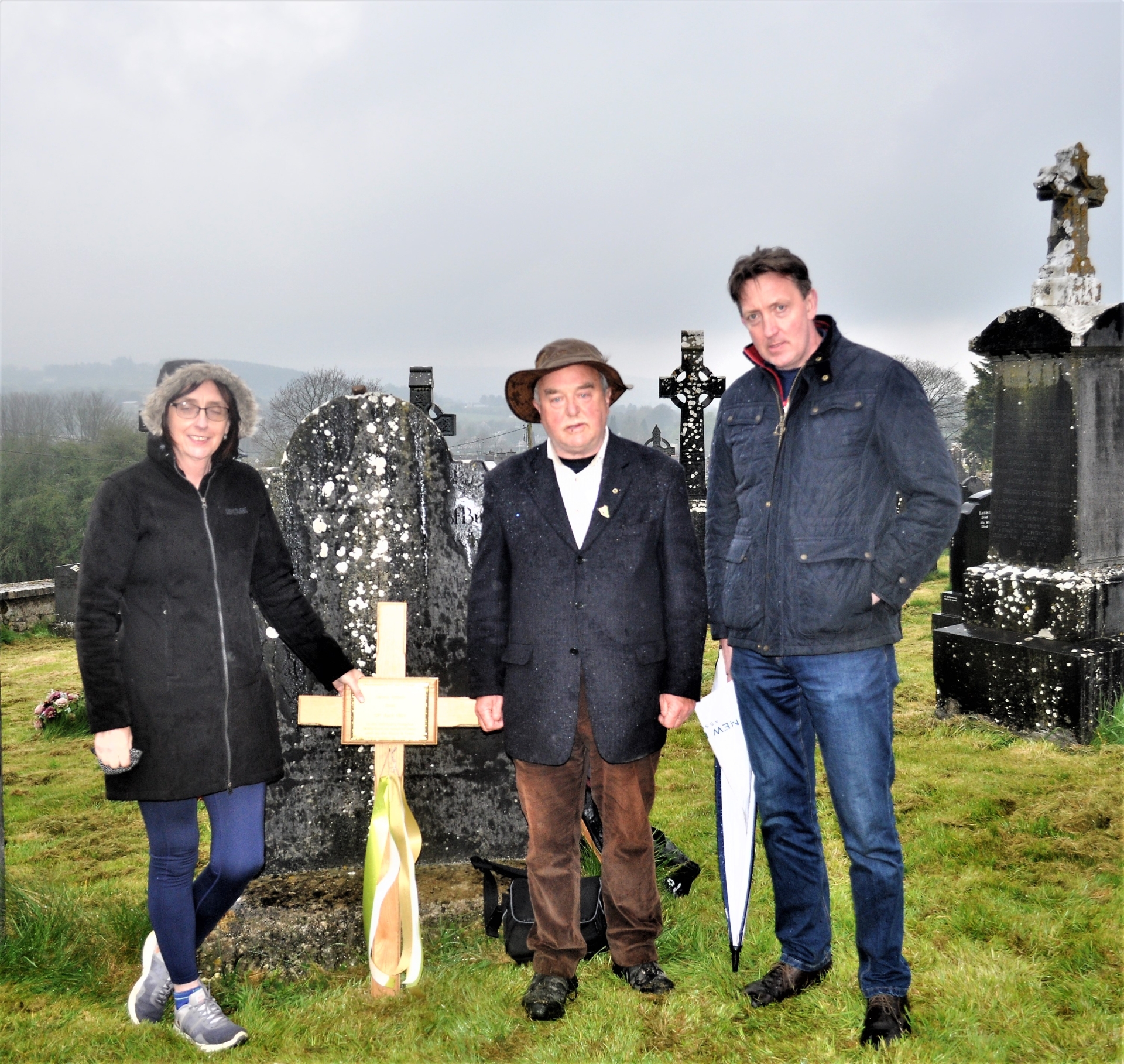 Noreen and Pat Hoban, descendants of James Hoban, with Sean Maher at the grave in Mullinavat. Maher gave an oration at the graveside as part of the ceremony to mark the centenary

Hoban’s wounds were dressed in Costello’s Shop (later Brogan’s) before he was taken to Waterford. He died in the county and city Infirmary Hospital at 7pm that evening.

In keeping with gatherings under Covid measures allowed, Sean Maher welcomed a group from Mullinavat to mark the event 100 years to the date and time that James Hoban died from his wounds inflicted by machine gun fire.

As the evening’s weather conditions delivered a heavy mist, Mr Maher welcomed relatives of James Hoban to the event, which was staged by kind permission of Fr Liam Barron at the grave of James Hoban in Mullinavat. Present also was a representative of the quartermaster general of the Old IRA of the South Kilkenny command, Richard Kenneally.

A beautiful song recalling the event, which was written by a local man, was sung with gusto by Tom McEvoy gave a lovely rendering of his composition to these present. A cross was placed on the grave by the Hoban relatives, while Liam Kenneally, the eldest son of Richard Kenneally, placed a tricolour garland on it.

The cross was kindly donated by Martin Power of the undertaking family in Ferrybank. His great-grandfather Tom Power and his wife Catherine O’Neill buried James Hoban in 1921, in James’ mother’s people’s grave 100 years ago.

A small group was present at the commemorative ceremony and sang a beautiful hymn which led by Michael Aylward, who was present also as a Peace Commissioner.

Sean Maher, thanks to information supplied by author and historian Eoin Walsh (writer of Kilkenny in times of Revolution 1900-1923), gave a brief description of the event of that fateful day.

Events began when James Hoban went to sell pigs with his uncle on the day. The pig fair in Mullinavat was an important event for farmers and buyers from Waterford and other places.
The street would have been pretty full, with cart loads of pigs to be sold and bought. The pig buyers of Waterford would have come early in the day.

The British Soldiers, with a compliment of Black and Tans and RIC personnel, had come from Dublin that morning and had mounted a large military gathering in Mullinavat.

The soldier concerned in the shooting was found not guilty, for reason that the ‘fuse was too light’ on the machine gun, and was described in the enquiry that followed ‘as an accidental killing’.

The shooting and the subsequent death of an innocent by standard by personnel of the British Forces was heard with great disbelief and a lot of anger.

The Kilkenny People from April 23, 1921 carried the following about the incident:
SHOOTING SENSATION AT MULLINAVAT
FARMER’S SON DIES FROM WOUNDS

James Hoban, Glendonnel, near Mullinavat, was wounded by machine gun fire accidentally discharged from a military lorry passing through Mullinavat on Tuesday morning about 11.30 o’clock.

He was engaged selling pigs at the time of the unfortunate occurrence, which created a painful sensation in the district.
He was conveyed to Waterford military hospital, where he succumbed to his injuries at about 7 o’clock the same evening. Deceased was a farmer’s son, aged about 23 years.

In conclusion Sean Maher thanked the painstaking work done by Bernie Kirwan for finding the grave, as James Hoban was buried in an Aylward from Buckestown grave.
Sean thanked Fr Liam Barron for allowing the ceremony to take place in the grounds of his church, Noreen and Pat Hoban from the present generation of Hobans for their presence at the ceremony and Martin Power undertakers for the wooden cross and breastplate. The song that Tom McEvoy, who more often than not uses his Irish name of Tomás MacAodhBhúi, sang a great composition that told the story of this terrible event in Mullinavat village.

The last four lines of Tom McEvoy’s song were:
The funeral was held the following day,
Mid scenes of sorrow and much dismay.
The rising moon behind Sliabh Cruinn,
Is now a paler shade of grey.

It is intended to erect a memorial stone to mark the War of Independence at a later stage in the year when the public can attend and a proper ceremony will be held in honour of all on this occasion. It was not possible to do that on this occasion or to publicise the event - an event that many people would have liked to be present at.

Finance is required to go ahead with the memorial stone. Donations can be made by contacting Sean Maher, tel 087-6731415 or email seanmaher2510@gmail.com